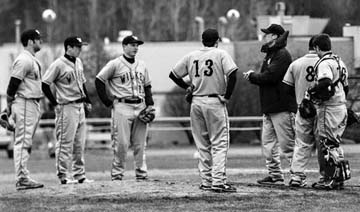 The weather may not feel like it, but it’s almost spring again and the Wilkes University Colonels’ baseball season is upon us.

Following a promising 21-15 season with a mark of 9-12 in the conference, the Wilkes baseball team is expecting a great year with many young players that have experience returning to the lineup for the 2014 season.

The Colonels are returning six players back to the lineup that eclipsed the .290 mark including the power hitting Stephen Ruch who batted .387 with 46 hits, 21 extra base hits, 8 home runs and 45 runs batted in.

Dan Pisanchyn is the second leading batter returning, following a season in which he batted .344. Bobby Schappell, Tyler Marino, Tom Ring and Marcus Leaf are all also returning to the lineup for the Colonels.

Bobby Schappell, a junior infielder, is coming off a solid season in which he led the Colonels with 47 hits 41 runs scored and also was second on the team with 26 runs batted in and 1 home run.

“I think we’re going to do pretty well this season,” the junior said. “Our goal is to win the MAC and participate in the NCAA tournament. I believe that’s a realistic goal for our team as long as people step up and make plays. We have been putting in hard work all off season so our success will be contingent upon solid defense and good pitching from the staff. It’s going to take a complete team effort for us to reach our goals this season.

However, if they want to be a major threat, players such as sophomore pitcher and outfielder, Tom Ring, who hit the ball with an average of .321 in his freshman campaign and was fourth on the team with a 4.95 ERA, are going to have to take control on the mound.

“I expect this year to make playoffs and have a great shot at winning the MAC championship,” Ring said. “As an outfielder I am planning on having another season batting over.300 and as a pitcher I’m planning to become part of the starting rotation and help the team win some games.”

The Colonels also return three other key pitchers. One of which is their stylin’, profilin’, jet flyin’, flame throwin’, wheelin’ dealin’, kiss stealin, Don’t even try swingin’ at my slider, sophomore pitcher Patrick Condo who led the team last season with 44.0 innings pitched, 31 strike outs, was second with an earned run average of 3.68 and only allowed one home run all season.