Game of the Week: Wilkes vs. Eastern 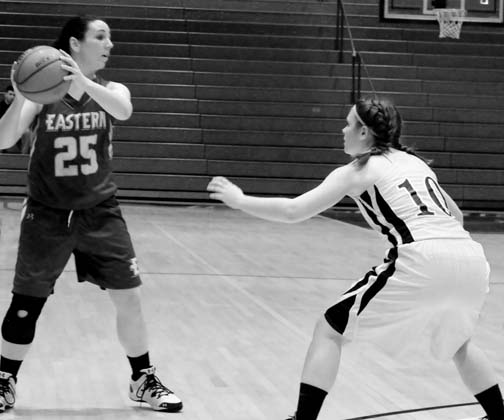 Junior Guard Elena Stambone guards an Eastern player as she looks for a teammate to pass to.

The Lady Colonels were looking to grab their first home win of the season against Eastern who entered the game ranked second overall in the Freedom Conference.

Leading the Colonels and conference in scoring this season is junior Elena Stambone who is averaging 20.2 points per game.

“I feel confident in myself and my team as a whole as we go into the game against Eastern,” Stambone said. “We have been playing very well as a team and will bring that momentum into the game.

“Our defense is improving and we are finally playing to our potential. We have won two of the past three games, and played a very tough game against FDU, in which we played excellent, although didn’t come out on top. I feel that if we play well together, hit open shots, and play tough defense, then we will win this game.”

Stambone and the team are aware that they have not won a game this season at home. But Stambone was not bothered by the fact heading into the matchup.

“No, I do not feel pressured going into the game against Eastern,” she said. “I do realize that we have not won a home game yet, but that is not a reason to feel pressured. When I put pressure on myself, I don’t perform as well.

“When our team puts pressure on ourselves then we do not play as well as we are able to. We need to have the attitude that we have nothing to lose, that way we will play relaxed. When we play relaxed, we execute our offense effectively, and give ourselves the opportunity to win the game.”

Wilkes started off the game by going on a 9-0 run led by Chelsea Brown and who else but Stambone.

Looking to gain the lead back, Wilkes came out with something to prove, closing the gap to just one point five minutes into the second half.

Eastern University then began to pull away as they were up by twelve with ten minutes left in the second half. They were able to keep a steady lead for the rest of the game and went on to beat Wilkes 60-46.

Wilkes drops to 1-6 in conference

Stambone scored 17 points while she continued her dominance this season. Chelsea Brown finished the game with a total of 17 points and 10 rebounds. For Brown, that was her eighth double-double of the season.

There are still eight games left for the Lady Colonels to get back on track. They return home at 1 p.m. Feb. 8 when they square off against Manhattanville College.

The Lady Colonels wrap up the season on Feb. 22 when crosstown rivals Kings College makes a trip up for a rematch.

Wilkes won the first meeting back in January by a score of 52-51 and are looking forward to sweeping the series.