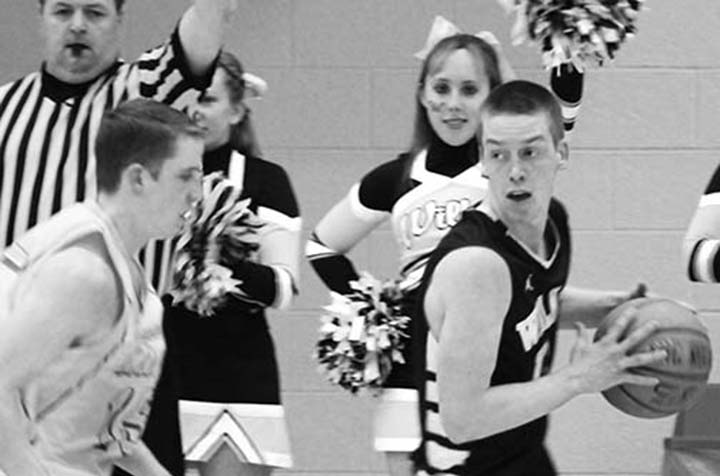 Alec Wizar confuses an Eastern opponent as he decides whether to spread the ball around or drop another three-point bucket himself over the players head. Wizar is one of the leading scorers this season on the team.

With the basketball season 75 percent completed, both the men’s and women’s team control their own destiny to end the season.

The men’s team currently sits at 7-10 overall and 2-5 in Freedom matchups, while the women are 4-13 overall, 1-6 in Freedom play. However, both clubs have a chance to turn their season around with their remaining games.

With seven games remaining, all seven matchups for the men’s team are against Freedom Conference opponents. This final stretch will be crucial if they want to come out on top with a better record than last year. Out of the team’s 10 current losses, two were by a margin of 10 or more points, while six games came close to a five points or less.

Their recent outing against Eastern University proved the team still has a lot left in them, as the 72-71 victory was one of the most exciting games all season, second to the game-winning three-pointer by Alec Wizar in overtime to lift Wilkes to a 77-74 win over Washington and Jefferson College earlier this season.

Wilkes jumped out early to a 10-1 lead to start the game against Eastern, but the lead fell apart in the second half when the Eagles made a late run to fight within three points in the final minute of play. Thanks to key layups by Steve Stravinski and back-to-back three pointers by Wizar, the Colonels held on as Eastern’s Anthony Parenti missed a potential game-winning running floater as time expired.

Wizar currently leads the Colonels in scoring, averaging 13.8 points per-game with 49 three-pointers made (second-best in the Freedom Conference).

Senior Pat Furst leads the team in shooting percentage converting 58 of 106 buckets from the field for a second-best 12.3 points per-game, while grabbing 5.3 rebounds.

Steve Stravinski averages 10.1 points per-game, shooting a team-best .842 from the free throw line, and also has made 39 three-pointers on the year.

They will see great competition to close the season, as they will face Eastern again on Feb. 15, and crosstown rival Kings again to end the season on Feb. 22.

As for the Lady Colonels, they too can turn the season around. With six of seven games against Freedom matchups, they will need to prove they can still be a force to be reckoned with in the conference.

They have lost two out of their last four games and have yet to win a game at home.

Their last two victories came down to within a bucket, as they beat out Kings 52-51, and grabbed the ‘w’ over Penn State Hazelton 53-51.

Junior Elena Stambone is the high-scorer for the Lady Colonels, with a conference-best 20.0 points per-game. Stambone has converted 40 three-pointers on the year and has 24 steals.

Junior Chelsea Brown is averaging 12.1 points per-game, proving to be a threat on both sides of the ball with a team-best 164 rebound and 39 steals, and 32 blocks.

Senior Ellen Rich has grabbed 120 rebounds this season and leads the Colonels with 49 blocks.

They follow a similar schedule as the men’s team and will face King’s College on Feb. 22.