Getting to Know … Jim McNally 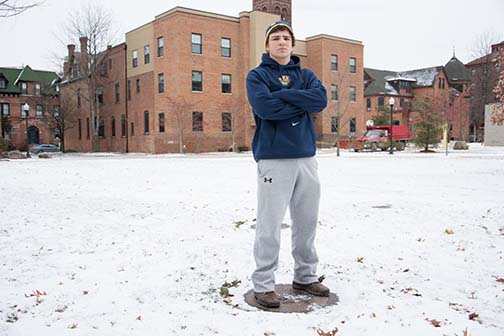 “I am currently an environmental engineering major. I won many awards in high school for wrestling, some of the bigger ones being Tunkhannock Kiwanis champion, Lackawanna league a runner-up, but my biggest achievement by far has to be PIAA District 2, 170-pound champion. It was a surreal feeling because all of high school being a district champion seemed to be so far away and not in the picture for me. So when I stood up on the top of that podium in first place, it was my greatest memory from high school. I went from a .500 record my junior year to an almost undefeated record my senior year of 32-4. Not finishing my high school wrestling career where I wanted to and not getting what I wanted to get done in high school was the major drive as to why I wanted to wrestle in college.”

What does wrestling mean to you, beyond just a sport?

A wrestler is committed to winning for no other reason than having a drive to be the best. There are hundreds of hours of hard work, sweat, and sacrifice put in just to be as great as you can possibly be for those seven short minutes out on the mat. Being a wrestler is a life style that a very select few could handle. Wrestling teaches people what it really means to push your body to the limit, and it teaches people what self-discipline really means in the hardest of ways. Starving yourself during Thanksgiving while every other regular person on the planet is stuffed, weighing out your food before you put it in your body so that you don’t get to heavy, working out until your body won’t sweat anymore. This is why a wrestler is an original type of person there are very few like it. But I would say besides the wrestling aspect of it all, the most important thing about being a wrestler is that you become part of the greatest family in the world. No one could break the bond of a family of wrestlers. The friends made in wrestling are friends for life. This is what makes us wrestlers torture and push ourselves every day, because when it all comes to an end it is completely worth it.

Which one of the three best sums up your wrestling style and why: strength, finesse or strategy?

I would have to say strength. The reasons being most of the time the only strategy I have when out on the mat is to score points. When I’m out on the mat I’m always looking to score in every position I find myself in, whether it be a clean quick take-down, or a long exhausting scramble for two. Then when I want to slow a match down, that’s where I feel like I am strong enough to control any opponent when I want.

What motivates you to make yourself better during a match?

Not giving any opponent even the slightest bit of respect is what makes me a better wrestler when wrestling during a match. If you just tell yourself that your opponent is just another wrestler, and nothing more than that, this is when I find myself wresting my best. Some kids get too caught up in the hype and respect opponents to much, so when they go out on the mat they expect to lose and don’t wrestle to their full potential, which is why they ultimately do lose. If you just convince yourself that every opponent is no better than the last one, then you will never change up your style of wrestling and will always stick to your best stuff, and this is when I wrestle my best.

When I was in high school I use to have wear the same warm-ups every match, and tape my shoelaces the same way every time, and I would listen to Linkin Park before every match. But ever since I have been at Wilkes I haven’t developed any pre-match rituals just yet.

What first got you involved in wrestling?

Well believe it or not I use to be a swimmer. My best friend wrestled since he was like 5 years old, so in seventh grade he started to teach me some moves and convinced me to wrestle for the middle school team. So, I quit swimming and joined the wrestling team because the seasons went on at the same time. Ever since then, I loved the sport. It was ironic too, because by the time we got to high school, I was tossing my best friend around the mat and beating him, resulting in him quitting the sport, which I feel a little guilty about but we are still best friends to this day, and I will always have to thank him for convincing me to wrestle way back in seventh grade.

6. Ten years down the road from now, where do you see yourself?

I see myself living out West somewhere in the country in a decent-sized home on a lake or in the mountains somewhere with a dog and one lucky woman. Maybe even a couple friends. I like to ask myself every once in a while, am I living my life the way I would if I were able to write my own story? I just like to live life with the least amount of care as possible without being lazy. Everything that happens happens for a reason, and I don’t like to stress over uncontrollable things in life.

7. What are any goals you want to accomplish before the end of the season?

As the season comes to an end, I would definitely like to finish strong and stay on track to my ultimate goals of being an All-American and National Champion, but my goal for the end of this season is to get a 1st place finish in the upcoming tournaments.

8. What is one moment during a match that you will never forget?

It was my junior year of high school, at the district tournament. I was not very good but I had a lot of potential, my confidence just wasn’t all there yet. It was my first match, I was unseeded with a losing record, and I was up to wrestle the No. 2 seed. I wrestled this kid the week prior and he beat me up pretty badly, something like 10-2, so I knew there was nothing to lose. My coach kept telling me to just go out there and wrestle your stuff, so I told myself that he was no different than any other wrestler at the tournament. I went out and won the match 4-2. The one moment i will not forget is the sound of the crowd when my hand was raised and right at the end of the match as I walked up the bleachers, I could hear the whispers of the audience, “who is that kid?” Those are two things I will never forget because ever since that match, I wrestle with that confidence that i always needed.

9. How do you balance school work and being a collegiate athlete?

It’s really not as hard as some people might think. The sport almost keeps you on track in school, because having practice every day and being on a tight schedule leaves no room to really get lazy. I usually try and stay on top of my school work during any free time that I have outside school and practice, then the only other thing I want to do when i finish all of my work is sleep. Another reason it’s not too bad is that Coach Laudenslager is always on his game with us staying on top of our school work, so he is understanding with the practice schedule and the school schedule. We have two practices a day at least usually 11 and 4 and we just have to make it to one of them, so that if I had class during one practice, almost every time i could make it to the other practice during the day.

10. Who on the team do you look up to and who would you pick to have them take you under their wing as a freshman?

I would definitely not be able to pick just one person to look up to because there are so many awesome guys on the team and they treat every kid that shows up and works hard every day with the same respect. It truly is a family. Each kid adds their own unique trait to the family, and i look up to each upper classman equally because they have each taught me something different that has gone on and help me become a better wrestler all around, but just to give a shout out to the 174-pounders Lynch, Chase and Diesel you guys are pretty cool.

11. Which professional athletes do you look up to?

I always admired Walter Payton’s work ethic and dedication to his sport of football. The will he had to win and succeed resembles the work ethic a wrestler needs to be the best. I also admire Coleman Scott’s double leg and Tiger Woods because he’s the man.

12. If you could pick one meal to eat for the rest of your life, what would it be?

I would have to say Taco Bell with some Baja blast, because nothing tastes better in the world after a tournament than these two things.

13. What are some other hobbies you have?

Some other hobbies I like to do are fishing with my friends on a nice summer day. I also hunt back at home, my uncle built a cabin out in the woods near Scranton, and I go out with him a few times a year. A couple other small hobbies I have are, shredding the gnar, baking specialty cakes, and building things.