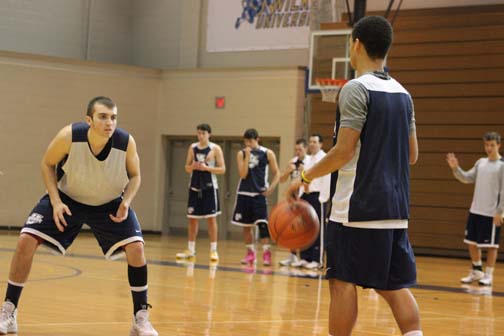 Guard Devin Dunn, at left, gets set on defense during a recent practice session for the Colonels at the Marts Center. The 6-2 guard from Staten Island will be one of the team captains for the 2013-14 season.

Nothing is more exciting than the start of a season. Jitters, nerves, being anxious, and finally being able to play after an off-season of practice is what fuels college basketball teams for a playoff bid come March.
Players on the Wilkes men’s basketball team have a mindset for this season: “This is it.” The general feeling was this is their year to redeem themselves after last year’s 11-13 record, going 4-10 in conference play.
This is a new year, with new players and a new mindset.
Wilkes opens up its season Nov. 16 against Penn State Allegheny in the Washington & Jefferson Tournament.
Recently announced, the Wilkes men’s basketball team named three captains for their season. Devin Dunn, Patrick Furst and Chris Shovlin will be deemed tri-captains for this year.
Dunn is a sophomore guard who averaged 1.3 points and 1.1 rebounds in the 10 games he played last season. After an off-season of development, Dunn reflects the privilege of being named captain in only his second year on the team.
“Its a true honor; I couldn’t have done it without the support of my teammates, every single one of them,” Dunn said. “They all accepted me as a captain from day one, and I couldn’t have asked for them to react any better way. It would be a tough job without this team.”
Second captain is forward Patrick Furst, who, in his senior year, looks to add to his impressive 7.3-point and 3.1-rebound junior campaign. Furst played in 23 games last year.
“Our team as a whole has put in a huge amount of time and work into pre-season conditioning,” Furst said.
“The captains all agreed on taking the pre-season to the next step in order to have the right mindset for the season. Day in and day out the whole team has been in the weight room working out trying to get stronger and quicker and almost everyday of the week we were in the gym either playing or conditioning ourselves for the season.”
Last but not least is senior guard Chris Shovlin. After returning to Wilkes after a six-year break from his original 2004-06 campaign, Shovlin picked up right where he left off.
Last season, Shovlin averaged 21.1 points, a Freedom Conference best, 5 rebounds, and 6.5 assists. His play earned him First Team All-Freedom honors last year for adding a versatile attack to the Wilkes offense.
Looking back to what hindered the basketball team previously, Coach Rickrode made sure to emphasize team unity going into this season. The word “family” has been adopted by many sports teams today, and the basketball team chose to make the meaning more than just a word, but a team lifestyle.
“We choose to constantly use the term “family” when we are around each other because it let’s everyone know how close to one another everyone is on this team,” Furst said.
“Everybody on this team has put in so much work in the off-season. The Wilkes men’s basketball “family” is motivated and ready for a successful season.
“The one thing about our team this year is the fact that everyone has dealt with adversity sometime in their career at Wilkes or in their lives,” Furst said. “What makes the team this year different from the team last year is our chemistry and how close-knit of a group we all are.”
Dunn concurred with the statement regarding team chemistry and attributed last year’s season as a means for improvement.
“Coach Rickrode has done a great job at increasing the chemistry and getting is all ready for a great season,” Dunn said.
“Last year was a rough year, there was no true chemistry, along with the injuries. We could never get it going last and practice wasn’t half as intense as it is this year. The team now feels like more of a family, with everyone pulling for each other and willing to help the team in anyway they could.”
The team plays its first home against Baptist Bible College at 7 p.m. Nov. 19. After games at Baptist Bible Nov. 19 and Rosemont College Nov. 23, the Colonels open Freedom Conference play  at 8 p.m. Dec. 4 at the Marts Center.