‘You Do What?!’ Flinging paint isn’t just for children 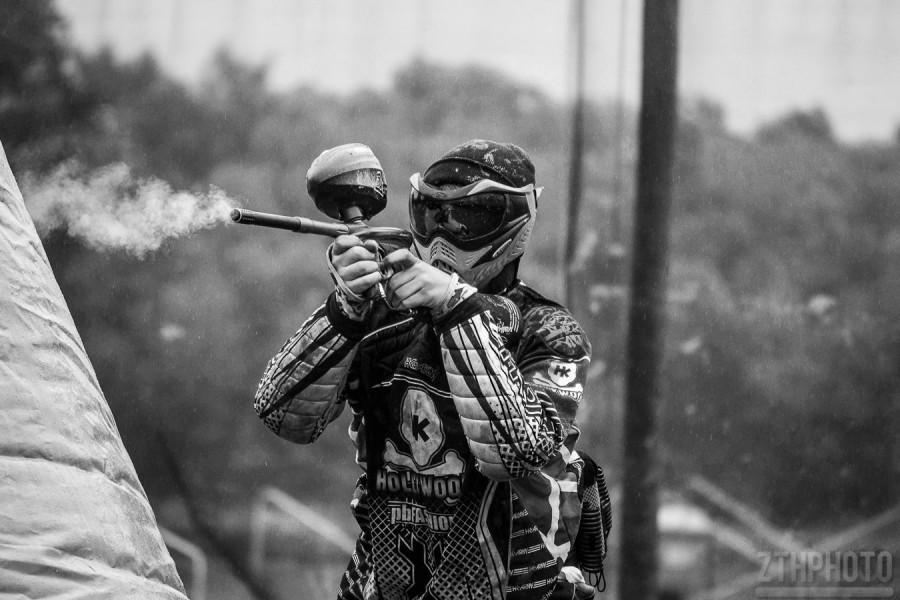 Players in paintball gear up in long sleeved shirts and long pants to protect their skin from the paintballs whizzing at them. They also wear pads at the competitive level because they slide on the ground often.

“You Do What?” is one incredibly unathletic girl’s journey to explore alternative sports. Check back every week for my take on sports I once knew nothing about and now find fascinating.
Paintball is a strategic, adrenaline-inducing sport that thousands of people across the globe participate in. The traditional goal of paintball is pretty straightforward: eliminate the other team’s players as fast as possible.
Paintball can be played recreationally or competitively. Recreationally, paintball can be played by any number of people with any rules those players decide to put in place. It’s a way for players to completely customize their game.
Fields can be filled with anything from inflatable bunkers to helicopters for players to conceal themselves in. Tom Rowe, a junior pharmacy major and president of the Paintball Club at Wilkes said, “I’ve played on fields with old cars and planes to nothing but trees.”
Players can also customize the game by choosing their own time  limits, point system and game type. “Capture the flag” and elimination games are commonly played.
“It can be in the back yard with your friends or it can be at an established field, because then (at a field) you get a  little more structure, you get insurance to protect yourself,” Rowe said.
Competitively, there are two types of paintball: speedball and woodsball.
Speedball is played in an open field with inflatable bunkers that can be used for protection or concealment. Speedball is more fast-paced because players use high speed guns and play short rounds of elimination.
Woodsball is the original form of the game where players compete in a wooded or natural environment. Steve Stefanick, a emergency medical services student at LCCC, has been playing for five years. He is on a 10-player team that started recreationally and is beginning to compete competitively.
Stefanick plays because “It is all strategy and I like to better myself in the game. Woodsball is what I prefer to play because you have to cover large areas and everything can be used as a hiding place, which makes every inch of the playing field unpredictable.”
Eric Mac, a senior integrative media major, loves playing paintball for the rush.
“I had a lot of fun with it when I was a kid and it just got to be more fun growing up. It’s a great team building activity,” Mac said.  His favorite form of paintball is also woodsball.
In field events, many competitive games have different themes. One of the biggest events using a theme is the Invasion of Normandy at Skirmish U.S.A in Pennsylvania, which draws in about 3,500 to 4,500 players a year and lasts for two days.
Skirmish U.S.A. is the largest, oldest paintball field in the country. Located in Albrightsville, a 45-minute drive from Wilkes-Barre, the facility has been there for 27 years, about as long as the sport has been around.
Luzerne County Paintball is the nearest location to Wilkes to practice the sport.  It is on Wyoming Avenue in Wyoming. Rowe hopes the Paintball Club will become more active since this location is now available.
“It’s convenient for people to drive to as opposed to driving 45 minutes to the Poconos,” he said. “The field we used to practice at was just over the border of New York and that’s an hour and 20 minutes away so when you want to take kids who have never gone before, that drive is not the most enticing thing.”
Beginners are welcome to join. For a beginner to invest in an initial setup, Rowe estimated that a used paintball gun, mask, case of paint and cost for entry will run a little over $100.
The most important gear for a player is the mask. People have gone blind from receiving a paintball to the face, so most venues have a “masks-on” rule that requires players to always wear their masks in the playing area, even when a game is not being played.
After a beginner gets the gear and learns the ropes, he or she can participate in competitive events held by the National Collegiate Paintball Association.
The NCPA has Class A and AA divisions.  Class A features match-based competition, where two teams face off for multiple points over the course of two 10-minute halves. In competitions, Wilkes is in class AA, which means teams play in a five-man format for five minutes.
“You’re put into a bracket of five teams and you play all the teams to win two out of three. It’s play, wait, play, wait, as opposed to a 20-minute game,” Rowe said.
Colleges may attend any Class AA event.
“Class AA is traditionally small-school friendly,” Rowe said.
Wilkes has had a paintball club since 2008. In 2011, Wilkes sent the club to the College Paintball National Championships.
“Historically, Wilkes has been very supportive of (the club),” Rowe said. “They went to nationals and placed 30 something, but it’s great that Student Government was able to fund it. It’s just the experience of going to nationals.”
For more information on the club, email Rowe at [email protected]