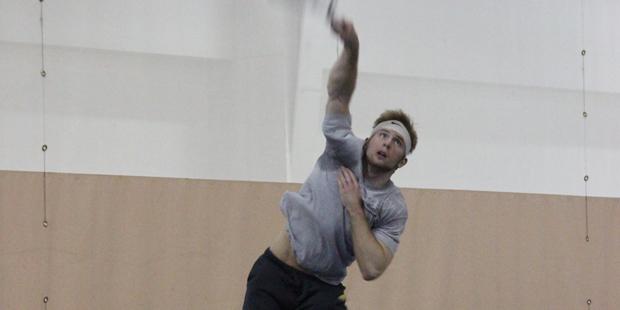 Both men’s and women’s tennis teams are training and preparing for the start of the spring season.

The Wilkes tennis teams have been practicing in UComm during the winter with head coach Christopher Leicht as the spring break trip in Hilton Head Island, South Carolina, approaches .

“We are very excited for our upcoming tennis season. We start our spring season with three matches on our spring break tennis trip to Hilton Head Island, SC.” stated Coach Leicht, who is very too get his players out there after a five month break.

The women’s team begins the trip on the 4th, followed by the men’s team on the 5th.

The men’s team had recently competed in the Drew Invitational over the weekend of Feb 16. Wilkes will enter the spring season as winners of their last five Freedom Conference championships, earning five straight automatic bids to the NCAA Tournament. Last year Wilkes finished 14-4 overall and 5-0 in conference play.

The girls team is led by Melanie Nolt, Katie Lynn, and Amanda Holyk and a junior Ally Kristofco. Ally will play a major role on the team for years to come. Other upperclassmen who will contribute include Amanda Rossi and Ana English. Last year was the best season in school history  as the girls scored a perfect 19-0 record, and highest ever regional ranking of 7.  Also, they won the Freedom Conference title for the 6th straight season, and advanced to the NCAA National Tourney.

The fall season saw the women go 3-0 in dual matches, and great individual tourney results at Bloomsburg and at the MAC Individual Tourney. Coach Leicht is confident in his girls as they will face two D2 schools and five regionally ranked D3 schools. .

“My men’s team is incredibly deep, with many quality players battling to make the lineup.” said Coach Leicht.

Leicht is expecting big contributions from upperclassmenAlex Makos, Brendon Blachowski, Clarke Freeman, Brando Helfrich and Trey Fidler. Adding to the talented team  is the freshman recruiting class – led by Michael Kranz, Connor Peckham, Max Appello, and Dan Hackford. The men are excited to defend our conference title, and get back to the NCAA National Tournament again.

The only thing that is on their minds is trying to win our 6th straight title. Like the women, they had a stand-out fall season, especially at the MAC Individual Tourney in October.  They won 7 out of the 9 flights at this event and saw the season come to an end.

After coming off a 19-1 season, the Lady Colonels will compete for their seventh straight Freedom Conference championship in 2013.

Last year, senior captain Melanie Nolt finished 16-5 and was named First-Team All Freedom selection, adding to her accolade of three-time Freedom Conference Player of the Year.

The second senior captain Amanda Holyk ended last year at 13-1, with a 6-0 record in the fall. Holyk grabbed third straight MAC Individual Championship at No. 5.

Katie Lynn finished 9-8 last season, but was 6-0 on the fall for the Colonels. Lynn won her MAC Individual Championship matchup at No. 4.

Finishing 20-1 and a First-Team All Freedom ballot a year earlier, Kristofco also ended the fall season at 6-0 and a title at No. 3 singles in the MAC Individual Championships.

This spring, Amanda Rossi, Ana English, and Olivia Hewison will be competeting for a spot at No. 5 and 6. In the fall, Rossi won the No. 6 title at singles.

Lynn and Nolt will return once again at No. 1 doubles, Kristofco and English at No. 2 doubles, as they ended fall with a 6-0 record, and the No. 3 doubles spot still up in the air.

After the past Ranger Invitational at Drew University, the men’s team have a depth chart set.

The mens team will have Steven Wilson at No. 1 singles, as he won over Kevin Erikson of Roger Williams with a straight set of 6-0, 6-1.

Michael Kranz will play at No. 3 while Connor Peckham earned No. 4 singles. Kranz recently won (10-5 and 10-8) in tiebreakers at the Ranger Invitational as Peckham delivered a 6-2, 6-1 straight match in one of his three matches in the event.

No. 5 singles will be Max Appello with two singles wins in the event and only allowed a total of four combined points in his victories. He also spent time at No. 6.

Brandon Helfrich, Daniel Hackford, and Trey Fidler also came away with victories at No. 8 singles bracket.