Black Panther claws its way to number one one

There is not enough room for a fancy intro this week folks; I saw “Black Panther,” and there is much to discuss about its awesomeness.

The Story- As promised, the movie picks up where “Captain America: Civil War” left us, with a son who must take his fallen father’s place as not only the King of a nation, but the protector of the people. T’Challa is about to inherit a mantle that has been passed down from generation to generation, the mantle of The Black Panther.

We enter the city of Wakanda, which we learn was built on the largest vibranium mine on the planet. For those unfamiliar, vibranium is the strongest substance found in the Marvel Cinematic Universe, MCU for short.

The vibranium deposit has allowed the Wakandans to become the most advanced civilization on Earth. They fear sharing their technology with the world, seeing how man has abused technological advancements throughout the centuries, and hide their city from the outside world, always “watching from the shadows.”

Somehow a stranger enters their metropolis, claiming to have the birth right to challenge the new King, and become the ruler of the African nation, with a much different agenda. He plans to take the Wakandan technology and put it in the hands of oppressed people everywhere. Subsequently this would expose Wakanda, “forcing” the new world to make Wakanda the capital for the world, over which he would rule.

T’Challa must face his fears of being an unready King and hero to do both in order to save his family, friends and country.

The Director- This is Ryan Coogler’s third film, and at age 31, he seems to have a better idea of what to do behind a camera than directors twice his age. I highly recommend both “Fruitvale Station” (now on Netflix) and “Creed.”

Along with directing Black Panther, Coogler also wrote the story, which says a lot about how much of this movie was his complete vision.

Said vision is absolutely gorgeous. It was a tall order to develop and create a fictional city in the heart of Africa, which is technology advanced, while making it seem like a grounded real-world setting. It is almost like asking someone to do the impossible, and that’s exactly what Coogler did.

From scene to scene you believe every aspect of the space these characters inhabit, and very little imagination is needed to believe that it’s the same world that we live in. This allows us to fall into complete immersion of everything going on in the film.

The settings, the accents and especially the costuming brought the city of Wakanda to life. This real world Coogler created allowed the cast to immerse themselves too, which lead them to bring these characters to life in a way that would make anyone who loves acting melt.

The Cast- Chadwick Boseman (“Get On Up,” “42”) stars as our hero, the new King of Wakanda and the Black Panther. We met this character in “Captain America: Civil War,” but we really dive in deep with this movie about what drives T’Challa to be a good king and a just hero.

There were scenes where he was able to make me feel the weight of what it was like to have that pressure of balancing between the two personas with just a look. I plan to see much more of Boseman in not only future MCU films, but different leading roles in various genres.

Michael B. Jordan (”Fantastic 4,” “Chronicle”) played the perfect counterpoint to T’Challa and had me actually rooting for the villain. Jordan’s character, Erik Killmonger, was not your standard MCU villain. Though not every time, after over a decade of producing 15 flicks, the MCU has given us some flat “cookie cutter” villains, but Jordan’s was by far the best.

There was never a point where his motives seemed too crazy or over the top. It was clear that after the hand Killmonger was dealt, he was angry and had a more radical view of how to take care of business than T’Challa, but at the end of the day, they had the same goal.

Lupita Nyong’o played Nakia, who could have very easily turned into “the love interest” in the movie, but through her performance, took the character to a whole new level. We meet Nakia as she travels with a group of captured African women on their way somewhere unknown, but you could imagine as being horrible.

The Black Panther ends up messing up her undercover mission and she holds no punches in telling him so. Right from the jump we are shown she is a strong, independent person who needs no saving from the hero. That theme carries out through the film, leading her to be one of three strong female leads in the movie.

Danai Gurira gets the distinct honor of being the most awesome, most fierce character of any movie, ever. That’s right, I said it. With just a look she makes me feel like a scorned child who has embarrassed himself. She oozes confidence, loyalty, pride and patriotism throughout the film. Such a strong love and sense of duty for her country are coincidentally what causes her character, Okoye, to have her biggest conflict in the film.

The next film coming from the MCU, “Avengers: Infinity War,” will be the largest event this universe has yet to face. It has people hyped all over the place, myself included. I really did not think there could be anything to get me more excited for that movie, but knowing Gurira will return in that film to reprise the role of Okoye, did just that.

Finally Letita Wright is the perfect essence of young, fun and playful that compliments her character’s extraordinary brilliance and grounds her as to not seem like a geek or know-it-all. Shuri is T’Challa’s sister and is in fact the smartest human being who inhabits the MCU, making her smarter than Tony Stark, Stephen Strange or even Bruce Banner, to name a few.

Shuri’s work is responsible for the tech that powers the nation and especially her brother’s suit and gear. She is forever improving on her inventions, never satisfied, saying, “just because something works doesn’t mean it can’t work better.”

The Summary- The whole experience of going to see Black Panther was extraordinary. From start to finish it is an astonishingly entertaining piece of art that everyone should experience.

There was a sense of electricity in the air as the credits rolled. This movie will have an effect on the world. It certainly will have a cultural impact for many who have not been able to see themselves in a title role, until now. 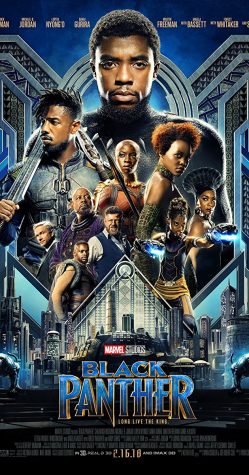