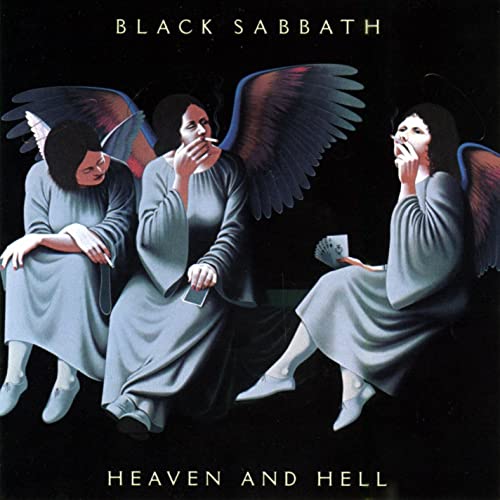 It seems almost fitting to end this heavy metal album series with the one band who started it all: Black Sabbath. Four friends from Birmingham, England: vocalist Ozzy Osbourne, guitarist Tony Iommi, drummer Bill Ward and bassist Geezer Butler wanted to create a heavy sound by adding extra distortion to blues riffs. The rest is history.

Black Sabbath has had a monumental career, with incredible highs and incredible lows. They’ve arguably had as good of a run as any, releasing six quintessential heavy metal albums in the beginning of their career: Black Sabbath, Paranoid, Master of Reality, Vol 4, Sabbath Bloody Sabbath and Sabotage. This legendary run from 1969-1975 helped usher in heavy metal as a legitimate music genre.

Then the rough bumps began. They released two relative duds of albums before Osbourne left to do his solo project. They enlisted non-legendary vocalist Ronnie James Dio from Rainbow, recording two excellent albums between 1979 and 1982 in Heaven & Hell and Mob Rules. Then he left, and Black Sabbath began to see a slew of lineup changes where eventually only Tony Iommi was the constant member.

Iommi later reunited with Dio and Butler, and then they enlisted drummer Vinnie Appice for the incredible Dehumanizer in 1992. Then they went their separate ways again, and Black Sabbath recorded two more albums before becoming dormant for about 15 years. Then in 2011 the classic Black Sabbath lineup (minus Ward) reunited to record one more album and do at least one more tour. They released this album, 13 in 2013, and then embarked on two more tours before disbanding for good in 2017.

That’s a 50-year career that is primarily broken up into two eras, the Osbourne era and the Dio era. While there are some who would say Tony Martin had his own era with the five albums released with him on vocals, quite honestly while some of the material might be solid, none of it is iconic.

On this day in 1980 Black Sabbath released Heaven & Hell, often seen as the peak of the Dio era. It is not often when bands are able to switch frontmen without skipping a beat, but Black Sabbath are among the few who were able to do it not just flawlessly, but triumphantly. After five years of relative mediocrity (by their standards), the band sounds rejuvenated here.

The album opens up with the iconic “Neon Knights,” a massive departure from the traditional Sabbath sound. While the Osbourne era was predicated by haunting atmospheres and sludgy, slow riffage, the Dio era opens up with a speed metal monster. This doesn’t sound haunting. This sounds… epic? If Black Sabbath ever came close to power metal, it would be this album.

“Children of the Sea” is an acoustically-driven song at first, with a beautiful vocal performance from Dio. The song eventually adds electric guitars and Dio switches it up to sound more aggressive. Dio has one of his best vocal performances ever right here. This is not the same Black Sabbath from 1970.

“Lady Evil” is an awesome catchy track that is driven by Butler’s bassline. While it pales in comparison to the more legendary tracks on here, it is still a solid track with excellent work from everybody involved, particularly Iommi’s excellent solo. The title track is the cream of the crop here. Iommi crafted another iconic riff, Dio sounds like he’s having the time of his life and the chorus is just too catchy.

Unfortunately the second half of the album is nowhere near as good as the first. That doesn’t mean these tracks are bad; they’re actually quite good. But good luck trying to top three of the most iconic songs in metal history, all of which are on Side A of the record. It’s not fair.

“Wishing Well” has fun guitarwork and excellent bass playing from Butler, with added depth in the form of an acoustic guitar in the background. “Die Young” is the strongest track on Side B and it is also the fastest song on the record. It has a cool pinch harmonic intro, and it also alternates between pure speed passages and more melodic-sounding acoustic guitarwork in the vein of “Children of the Sea.”

“Walk Away” is a bit of a standard-fare rocker. It has a great melody and sounds a little poppy, but ultimately by default it is the weakest song on here. The closer, “Lonely is the Word,” is an underrated gem, with incredible blues guitarwork from Iommi. It’s super heavy and super slow, and the last two minutes is essentially Iommi running through some blues solos.

Iommi’s guitarwork is awesome. He strays away from the doom metal-styled riffs for the most part here, and has quite a bit of speed and emotion here. Butler’s basswork here is among the finest in his career; he’s very prominent and puts on a great groove. Unfortunately, Ward’s drumwork is lackluster here, but it isn’t anything particularly egregious and he is bailed out by his bandmates.

The star of the show here is Dio. He revitalized Black Sabbath and gave them a new sound that almost sounded like a different band. His vocal range was much higher than Osbourne’s, and as such, the band was able to do a little bit more with their instrumentation. Dio has the pipes that Osbourne never did, and he sounds like he’s having an absolute blast on the record. The album was produced by the great Martin Birch, and every instrument on here sounds crystal clear with quite a punch.

While Butler used to write the lyrics, Dio wrote them instead on Heaven & Hell. Instead of darker themes about religion or doom, a lot of the lyrics here are your standard-fare Dio: fantasy themes. Although on here, he primarily sings about philosophical topics and heroism. The songwriting is incredible here and Dio truly makes it his band.

Black Sabbath had a storied career, and one where an entire music genre was spawned because of it. At a time where the band was at a crossroads, they could have easily put out a divisive album. Instead, they released not only one of the most iconic albums of their career, but also in all of metal. Times of strife create the rawest of art, right?