What is the distinction between youth and old age? 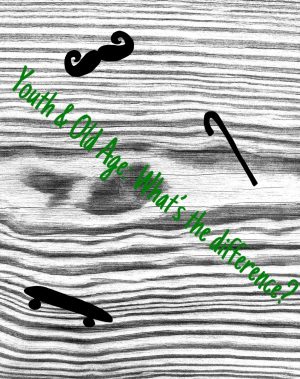 Young and old people are two separate groups of people in society that differ in their behavior, their likes, dislikes and their nature. There are several different ways in which they differ, but together they complement one another.
A primary distinction between the two is that youth typically dwells in the future, while old people may live in the past. When talking to an older person, they may reflect on the past or on memories when they were younger.
Typically, when a child is spending time with their grandfather or grandmother, they may tell them stories from the past or contemplate what life was like when they were their grandchild’s age. It’s also common for older people to look at old albums or old photographs from when they were younger.
However, younger people have all the time in the world because they have a future in front of themselves. So, young people usually live in the future because they have so much to look forward to or have dreams and aspirations that they may wish to achieve.
Older people have already achieved most of their goals or fulfilled most of their aspirations so they are often content with the present and find comfort in nostalgic things.
As for a distinction in their nature, younger people prefer to be away from their family in order to appear independent. Younger people may desire to leave home in order to gain independence, maturity or prove themselves.
However, a person of advanced age prefers to be surrounded by family because it is within their family that they live their past.
According to the Oxford Journal of Gerontology, “Nearly nine-in-10 adults ages 65 and older have children. Of this group, over half are in contact with a son or daughter every day.”
Essentially, their family is their legacy and it’s a reminder of their past. It gives them happiness because they may not have as many goals in future, so their family is very important to them. Therefore, a person of advanced age may want to be with their children or grandchildren.
Another key distinction between youth and old age is their outlook on life. Wisdom is typically associated with someone of an advanced age, and this is certainly true. Young people are not very experienced in life whereas those of advanced age are very much experienced because they have already gone through the stages of life.
As the saying goes, “you live and you learn.” Therefore, older people are simply more experienced because they have learned from their mistakes and have more wisdom compared to a younger person that may lack this experience.
This is the reason why many young people may seek advice regarding an important matter concerned with their life from an older person, such as a parent, a grandparent or even a teacher.
Amadou Hampate Ba (1901-1991), a Malian writer and diplomat once said, “Every old man that dies is a library that burns.” This shows the intelligence or sagacity an older person may have because of the knowledge and lessons they have obtained over the years.
Old people may be stubborn because they have lived so long that they may not want to see change. Therefore, a person of advanced age may be stuck in their ways. For instance, when we are young, the way we think is in a fluid state because we are molding it and it is subject to change.
However, someone of an advanced age has reached a point where their identity and way of thinking has been set and establish.
According to the Association for Psychological Science, older people may “have a resolute adherence to his own ideas and opinions.”
Thus, they are less flexible and less willing to adapt; however, they still may be open and respect other people’s ideas but that does not necessarily mean they will change their way of life.
Overall, both those of old age and youth differ in several different ways but they each complement one another. Each group can learn from the other because they each have strengths and weaknesses. For instance, when it comes to asking for advice I may go to a parent, but when it comes to working with excel my grandmother might come to me. Therefore, each one complements and helps the other.