Can materialism be a vice? Or can it be a virtue?

Before you begin to read this article, I want you to think. What do you think the answer to this quest 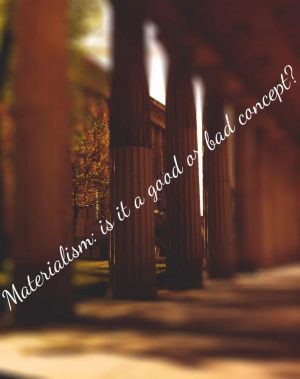 ion is? Is being materialistic an immoral and wicked behavior or is it a behavior showing high moral standards?
Remember your answer and take into account the point I make and see if your answer has changed in any way by the end.
Spirituality which is the antithesis of materialism has been a respected attribute of humanity for many centuries. The Abrahamic religions consisting of Christianity, Judaism and Islam feature spirituality as an omnipresent adhesive that speaks to the core of their message.
Overtime, the value of spirituality has seemed to decrease. In fact, spirituality often asks one to practice humility which is widely considered to be a weak trait in modern society.
With that being said, in order to truly assess whether materialism is a vice or a virtue one must understand if the antithesis of this attribute is a vice or a virtue.
In terms of humility which lends itself well to spirituality, it can be seen as a characteristic of low self-esteem and personal degradation. Despite humility having a negative connotation in modern society, it’s lasting effects still cloud society’s mentality today.
In fact, in the past great influencers such as Ghandi to Benjamin Franklin percieved humility as a virtue.
For this reason, upon hearing the question my instinct like I assume many of you experienced was to jump on board with this response. If these influencers subscribe to the sound view that humility which is virtually the antithesis of materialism is a virtue, it seemed relatively easy to state that materialism was in fact a vice.
After all being humble meant one wasn’t being proud. Pride is considered to be one of the “seven deadly sins” and can come as a result of materialism and attaining one’s physical desires in reference to wealth and social standing.
However, upon researching humility I found where the argument of humility being a vice could arise. The first point was made by my father. He pointed out that if a person is too humble, they would not find any satisfaction in any of the good work they may do.
This wasn’t enough to goad me into thinking that humility is a vice and thus materialism is a virtue, but enough to push me out of thinking humility is really as great as it was cut out to be.
A confident and materialistic person can go a long way on just confidence alone. Again, this is provided that the confidence is displayed in moderation and does not become pride. Overconfidence is just as bad as underconfidence. In this way, it is clear to see that the two can be virtues as well as vices.
It must also be said that humility in too little dosages makes a person come across as snobbish or arrogant. This would drive other people away simply because a pride-filled person is pretty awful to be around.
It was also brought to my attention that the word humility is so close to the word humiliation. Humility may require acts of passiveness in response being degraded. The saying goes “any self-respecting person” would fight back.
If a person is humble enough, they might let the humiliation take place simply because they don’t have the self value that one with even a grain of pride in their heart might.
This still begs the question; is materialism a vice or virtue? On one hand, materialism is what keeps can allow a person to stay grounded.
The story of Icarus is always one that comes to mind. Icarus flew too close to the sun and caused his wings to melt, plummeting him to his death in the water below.
In this case, his lack of humility and pride which may have derived from a materialistic ideology had cost him his life. However, on the other hand, “too humble is half proud”.
This proverb states that the more humble individual may be taking pride in the fact that they are so humble. This person would perform a great deal of humiliating acts in an attempt to “fish for compliments” and gain praise.
Has your answer swayed even a little from the beginning? Are either of these points enough to qualify materialism as a vice or a virtue? That’s entirely a matter of personal interpretation. I hope I’ve made you think a little though.