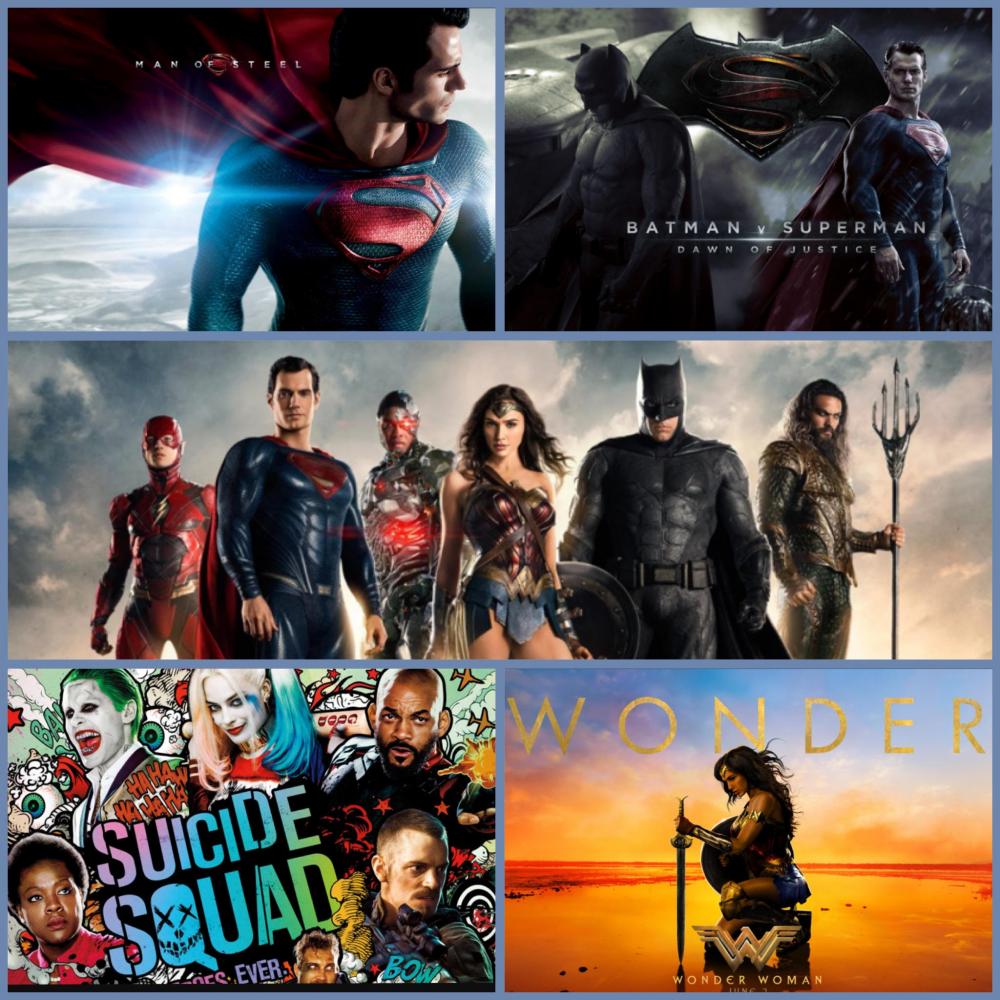 We are in the golden age of the comic book movie. Since “Spider-Man” was released in 2002, movie studios have been given the license to practically print money with these characters.

Warner Brothers has had DC Comics in its roster for decades and has attempted to franchise the characters into the limelight before. In 1978 we got Richards Donner’s “Superman”, in 1989 Tim Burton gave us his version of “Batman”.

Meanwhile on television in 1975, Lynda Carter wore the bulletproof wristlets in “Wonder Woman” while John Wesley Ship was the scarlet speedster, “The Flash”, in 1990.

It’s the dawn of the new age though. There is now a super hero movie loving culture, and DC/WB is a bit late to the game. Marvel has been setting the standard for the genre since 2008, but DC is stepping up to the plate and knocking out home runs as if they were Babe Ruth.

Man of Steel (2013) — The first movie to kick off Warner Brothers and DC Comics “Extended Universe”, affectionately referred to as the DCEU, Man of Steel focuses on the most well known comic book character in the world, Superman. Henry Cavill (“The Man from U.N.C.L.E”, “The Immortals”) does a great job bringing DC Comics oldest character into the 21st century.

It is hard not to look to the past and compare the new man of tomorrow to the 1978 silver screen version played by Christopher Reeves. Reeves portrayal is iconic and will most likely always be what future actors hope to live up to. As a new generation comes into the realm of the superhero movies though, they will have to respect the past but learn to embrace the future, and I think Henry Cavill is the best example of how to do so.

He steps into the super suit, minus the red briefs on the outside thank goodness, with ease. Unlike many heroes, Superman’s alter ego Clark Kent is the disguise, not his bright costume. Superman is an alien who was raised as an earthling and has to learn to adapt to his superhuman abilities. He has no one to relate to, and life isn’t just all about smiling while running next to trains or saving the day perfectly. Cavill brings a sense of realism to this god-like character who just wants to know where he comes from, and why he was sent to Earth alone.

I adore this movie and put it high on the list of superhero flicks. This is a perfect place to start and build an entire universe off of, and who else’s shoulders would you rather it sit on than Superman’s?

Batman v. Superman: Dawn of Justice (2016)- I remember the exact morning where I read the casting news for Ben Affleck (“Argo”, “Good Will Hunting”) to play the bat of Gotham, and rolling over wishing it never happened. To my surprise though Affleck was one of the strongest parts in that movie and absolutely crushes the role of both Bruce Wayne and The Batman.

This movie opens up on one of the final scenes from Man of Steel. It starts with a panicked Bruce Wayne running through Metropolis as Superman and General Zod are having a slugfest in the sky, leveling most of the city. As the vigilante billionaire comforts a little girl amidst the rubble of Wayne Tower the audience is given a clear vision of what the movie is all about.

Henry Cavill reprises his role as the hero of Metropolis that must do battle with the dark knight. This is all part of Lex Luthors’, played by Jesse Eisenberg (“Now you See Me”, “The Social Network”), plan to show the world that Superman is not who they should be putting their faith in. This is where the flick loses me, I love Jesse Eisenberg and have watched him in countless projects, but he is no Alexander Luthor. I grew up watching “Superman the Animated Series” and that version will always be the one true Lex Luthor to me. Unfortunately for me though, Jesse came nowhere close to that iteration of the character that I grew up with. He seemed more like a scared little boy than a confident man with a plan. This all is just my opinion and for all I know this is just the beginning of the arc his character will take throughout multiple movies.

I still give this movie high praise otherwise and see it as a strong entry into the “multiple superhero” film industry that they were so late to join.

Suicide Squad (2016) — Probably the most waffled over movie for fan boys, “Suicide Squad” was a play from left field that many didn’t see coming. The vision helped establish the “bigger picture” for a cinematic DC universe and also brought together a strong cast to help pull off one of the largest ensemble movies ever done in comic book cinema.

They are lead by Rick Flag, Joel Kinnaman (“RoboCop”, “The Killing”), with the help of Katana, Karen Fukuhara (making her film debut). They are under orders from Amanda Waller, played by the amazingly talented Viola Davis (“The Help”, “Fences”), to stop The Enchantress, aka Dr. June Moon, played by Cara Delevinge (“Paper Towns”, “Tulip Fever”), from her giant floating trash ring in the sky.

If the above line doesn’t make any sense to you, don’t worry. It confused a lot of moviegoers as well. The story gets a little convoluted in the middle and then drops all together near the very end. Director David Ayer (“Training Day”, “End of Watch”) still brings the movie as a whole in for a landing that leaves you wanting more. There have been rumors that his next project with the DCEU might not be the sequel to Suicide Squad, but a spin off called “Gotham City Sirens” which teams up Catwoman, Poison Ivy and Harley Quinn.

Wonder Woman (2017) — The latest installment from the DCEU is probably the most wonderful (pun fully intended). Gal Gadot (“Furious 7”, “Keeping Up with the Jones’s”) plays the lead role of Dianna, Princess of Themyscria, so well in fact that you can hardly separate actress from role. Very few people are “born” to play characters, but it is my opinion, that Gadot is one of those examples.

After intelligence operative Steve Trevor, played by Chris Pine (“This Means War”, “Star Trek”), crash lands on paradise island, Dianna decides she must help the man who has described the war that is taking over the world. As an amazon, she believes it is her duty to stop the god of war Ares, which is the only explanation for the war in Dianna’s eyes.

She’s fierce and charming throughout the entire picture and the character Samer, played by Said Taghmaoui (“American Hustle”, “Three Kings”) sums up the entire watching experience best after watching Princess Dianna through a fella across a bar room, “I am both frightened… and aroused.”

Wonder Woman is also the biggest financial success the DCEU/WB has released, taking in over 820 million dollars worldwide. It has also just had its Blu-ray release, that promises an extra bonus scene not seen in theaters, that I’m sure will bump their profits considerably higher even.

Patty Jenkins has been officially announced as the sequels director and I can not wait to see where her and Gal Gadot take the character next.

The Justice League will hit theaters on Nov. 17,  and will bring all these characters together on the silver screen for the first time. If you just can’t wait until then, or want to know more about the team before going to the movies, the animated series “Justice League” and “Justice League Unlimited” are available on Netflix.

These shows are the direct reason I love DC and their characters as much as I do. The shows take the DC characters and plotlines seriously, and do an amazing job faithfully bringing them to the screen. It has an ongoing plotline rather than random one-off episodes and brings even the most obscure characters into the fold.

The Justice League animated show even premiered on the same exact day the movie is slated to release, 16 years ago, on Nov. 17, 2001. This is a brilliant move on the studios part to release the movie 16 years after its critically acclaimed animated counterpart and have even modeled the posters to look alike.

Keep on the lookout in a November issue of The Beacon for a review upon the “Justice League” release.