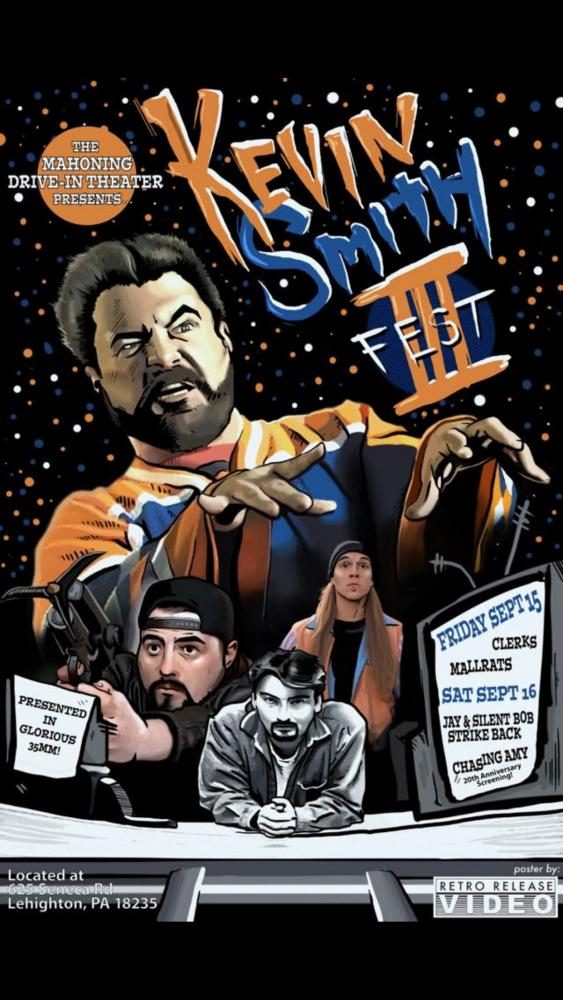 It was my 12th birthday when I unwrapped a DVD copy of “Clerks” and “Mallrats” a friend had given me. I honestly had never heard of them, but was told to have faith and give them a watch.

It turns out that the little bit of faith in watching those movies is what seems to have put me onto my life path.

The pair of these films were written and directed by a man named Kevin Smith, a New Jersey native like myself. These two movies are the first in what is now referred to by Kevin Smith fans as the “View Askewniverse”.

View Askew Productions is the productions company that Kevin Smith, and longtime friend and partner, Scott Mosier set up after meeting in a Canadian film school.

Smith and Mosier would go on to add “Chasing Amy,” “Dogma,” “Jay and Silent Bob Strike Back” and, later on, “Clerks II” to the “Askewniverse,” launching them into indie film stardom. What they did is not nearly as impressive as how they chose to do it,  though.

From the start of production on “Clerks” in 1994, Smith has always done things in his own unique way. In order to bring his dream into reality, Smith had to take a huge leap to get the money necessary to start shooting the movie. Smith sold his comic book collection, but more drastically took out a number of credit cards to get a budget of $27,575.

At the time, Smith worked in the convenience store that Clerks was set in, and he was making minimum wage. If he wasn’t able to go on and sell the movie to Harvey Weinstein and Miramax Studios like he did, the interest alone on these cards would have crushed Kevin Smith by now.

It is that bold attitude that inspires me today to take all the risks that I have.

Kevin Smith still preaches the philosophy of “live a ‘why not?’ life,” and insists that everyone take whatever shot it is that they see in front of them.

While watching a Canadian mini-series about hockey, Kevin picked up a piece of advice Wayne Gretzky’s father, Walter Gretzky, had given him while learning to play hockey. “Don’t go where the puck is, go where the puck is going,” which Smith, and now myself, have taken to apply to everyday life.

On top of still breathing life into indie film,  Smith co-hosts multiple podcasts from the podcast empire that he built in 2007, SmodCo. This has allowed me to listen to the words of wisdom from my spiritual guru on a regular basis, and affirmed the fact that Kevin Smith really knows where the puck is going.

Clerks: Released in 1994, on a shoestring budget, first time director Kevin Smith knocks it out of the park with “Clerks.” The movie follows two prototypical slackers, Dante and Randall, during a normal day in their lives as clerks at a convenience store and video rental store.

The two complain about customers, talk about their love lives and just about anything else you and your friends talk about. That’s the best part about this movie for me, for once I saw people having conversations that sounded like the ones my friends and I had on an everyday basis, projected on screen. The movie is like a fine wine and gets better with time — the more I learn about myself, and the world I live in, the funnier it becomes.

Mallrats: Kevin’s “sophomore film” was a box office flop when it was released in 1995, but after its VHS release, it became an instant cult classic. Virgil Cardamome stated it perfectly in his interview: “It was that VHS tape we passed around in high school.”

Smith himself has stated multiple times that this is the flick that most people come up to him and say, “I love Mallrats, and it was my way into the “askewniverse.” This movie was so ahead of its time and deserves a second look from the bromance loving, comic book obsessed movie culture we live in today.

Chasing Amy: The story behind the making of  “Chasing Amy” is one of my favorites out of the many that Kev tells. “Clerks” was a hit and “Mallrats” had just flopped, so Smith was in a sticky spot and wanted to bring this new vision to life, feeling he had something to make up for with “Mallrats.” Smith was very set on how, and with whom, he wanted to make this movie, but the studio had other plans. Smith took a huge cut from his salary to make the flick with who he wrote it for rather than the big name stars the studio thought would help sell the movie upon release.

The film opened to critical acclaim and even won Kevin Smith, and one of the stars of the movie, Jason Lee, independent spirit awards for best screenplay and best supporting actor. It’s a fantastic film that’s a little heavier than all the rest, but stays on par with Smith’s specific brand of heart and humor.

Jay and Silent Bob Strike Back: Matt Damon was surprisingly one of the first people to suggest that the two stoner buddies in the background get their own feature. Luckily, while signing the deal with Mirimax all those years ago at the Sundance Film Festival for Clerks, Smith decided to cut those two characters out of the overall deal to sell the film, knowing he wanted them to show up in other projects he had in mind. Since then, the heterosexual life mates have become Indy pop-culture icons. They even have their own comic book store named after them, “Jay and Silent Bob’s Secret Stash,” located in Red Bank, New Jersey, which has even spawned its own television show coming into their 7th season on AMC.

In 2001, Smith listened and gave Jay and Bob their own road movie adventure which has endless “Easter eggs” to tie together Kevin’s “Askewniverse,” and is just plain fun to watch.  Currently Smith is working on “Jay and Silent Bob: Reboot,” which will have his beloved buddies come back to examine, and most likely mock, Hollywood’s obsession with rebooting old properties. 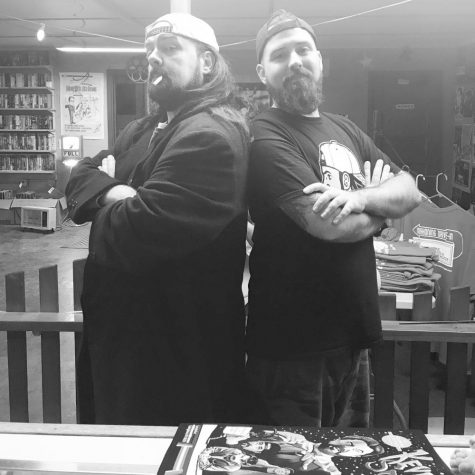 A ‘Silent Bob’ look-alike (left) poses like the character in the movie next to Nick.

I’m not the only who Kevin Smith has inspired. Recently I was able to sit down with some other folks who Kev has helped find their way to living a “why not?” life.

Through the Facebook group “The World of Kevin Smith,” I learned of a two night, four-film event called “Kevin Smith Fest III,” held at The Mahoning Drive-In Theater in Lehighton.

I immediately knew I wanted to attend the event and meet the minds behind this fest. I was lucky enough to sit down with Virgil Cardamome, Matt McClanahan and Jeff Mattox, who are all partners at the Mahoning Drive-In Theater, and have hosted this event for the last three years.

Nicholas Filipek: If you could start off first with telling me some more information about the drive-in.

Virgil Cardamone: The Mahoney Drive-In theater has been running consistently since 1949, and was built in 1947. We have all original projection here with one of the largest cinemascope screens in the country, and most importantly we’re one of the last drive-ins. In the heyday there were close to 4,000, now there’s maybe about 300. When Matt and myself came into the fold here in 2014 our mission was to save this drive-in. With success here it’s our new mission to save the drive-in culture.

We have reel to reel, where every 20 minutes Jeff has to physically switch out the reels, so we kind of took that back and when we did that it let us work with private collectors, which is a really big thing for the model were going with.

I’m the film booker for this place and when I reached out to one of the studios they said “you’re absolutely insane, there’s no way you guys are going to be able to stand on the fact that you’re going to have 35 millimeter, it’s a dying medium. If you don’t go digital you’ll be dead in the water.” So we really turned that on its head and made the fact that we show original prints in 35 mm our sell. People drive past other drive-ins to get to us because we’re doing something unique in this whole entire country, in this whole entire film medium.

NF: So why Kevin Smith movies?

Jeff Mattox: I like it, I think in my opinion his older work is more appreciated so that’s why I’m glad we’re running the stuff that we’re running.

Matt McClanahan: Virgil Loves Kevin Smith to an unknown end and it was always a dream of his to put on that show. So every season he gets to live his dreams on the big screen of his favorite filmmaker. We love to celebrate independent and local filmmakers, and Kevin Smith is very much a champion of that.

VC: He’s the guy who lights the fire in my belly and I think for a lot of creatives he’s the guy who’s been in my ear since high school, literally in my ear with all his podcasts and movies and everything else. He made me want to become a filmmaker, but I think the thing I love him most for is that drive. He never has this settle, it’s always “go go go go go.” If you have an opening, go through it. That’s definitely what he is to me, to many he is a hero, and to me he is my hero.  The hope is that we will eventually get him here.

NF: How does this compare to the last two events?

JM: I think it’s grown a little bit and I think it is going to keep on growing.

MM: Overall with the season we are growing. As a whole we are getting an uptick in people being aware of the theater, aware of our mission, and there’s a blooming appreciation for 35 exhibitions of classic films and drive-ins is general. There’s not many of these things left and we definitely have a special one here, it’s not only a theater, it’s a bit of a museum. We are very much of the mindset of restore and preserve, we keep rooted in the past because that’s what’s most important, the history.

NF: Out of the four movies you played for Kevin Smith Fest III, what’s your favorite?

It was an absolute pleasure to sit down with them and get to talk for a while. You can tell all three of them really loved film and are incredibly passionate about the theater they obviously love so much. At the end, Virgil really summed it up perfectly, “That’s the most important thing to Matt, Jeff and I, is that not only this place stays alive but the idea of drive-ins for the next generations to get passed along to.” 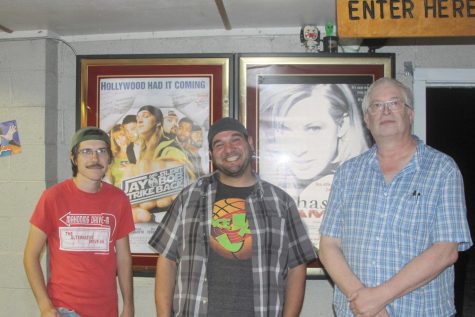