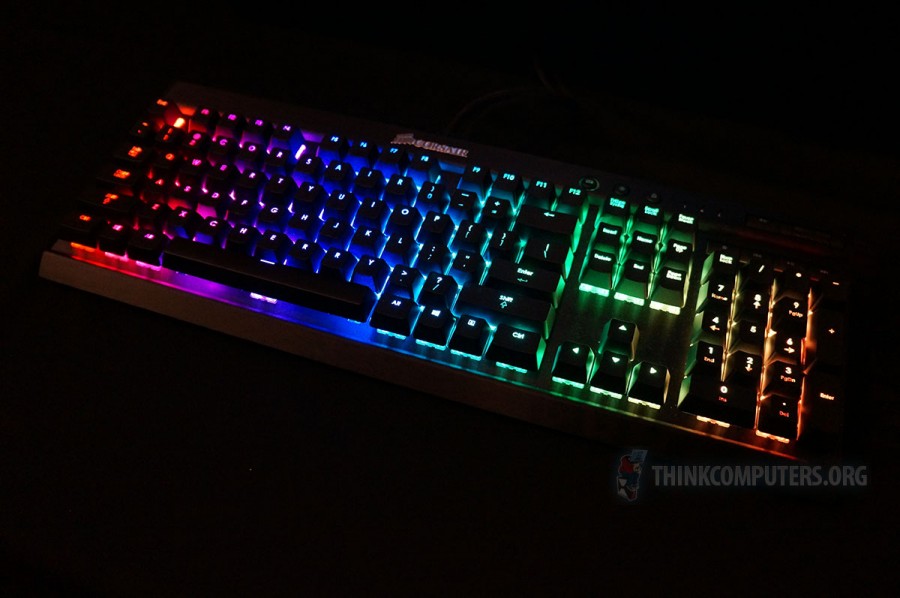 Ever since CES 2014 when Corsair first unveiled this mysterious RGB LED mechanical gaming keyboard, people wanted to know two things; what is it and when can I get my hands on it?

After nine months of waiting (and several delays later) we now have the Corsair Gaming K70 RGB keyboard. Originally being named the Corsair Vengeance K70 RGB keyboard, Corsair pulled a move I have never seen a gaming company do. After the first batch of shipments, Corsair renamed and rebranded this keyboard giving it a new logo to go along with it’s new product line, “Corsair Gaming.”

While I own the original “Vengeance K70 RGB,” I can say there are no changes what-so-ever to the keyboard, except for the new Corsair Gaming logo.

All of that stuff aside, this keyboard has been arguably the most hyped gaming peripheral I can remember. Is it worth the $169.99 price tag?

Let’s break this down first. Corsair is a company that has always made trusted and reliable PC gaming products/hardware.

Last year, Corsair really made a name for themselves when they released the Vengeance product line with mice, keyboards, and headsets. The Vengeance series keyboards were top of the line and highly rated, with it’s brushed aluminum finish and top of the line MX cherry switches that came in red, blue and brown. Why was there a need for RGB LEDs inside?

PC gamers love aesthetics. When they build their PC, odds are they want to deck it out with matching hardware inside that all is aesthetically pleasing to the eye, and LED strips have become a huge fad in the world of gaming accessories. Why not make a keyboard that has LEDs inside, capable of 16.8 million colors?

Corsair was ahead of the curve (at the time), and delivered the K70 RGB to stir up the PC gaming world.

The keyboard itself is very nice and solidly built. It is made of anodized aluminum and has a nice stealth black finish, complimented by a brushed metal accent.

It comes with a nice detachable rubberized wrist wrest; with four extendable feet on the bottom of the keyboard to increase it’s elevation. My particular keyboard came with the MX cherry red switches inside, making my first mechanical keyboard a gamers blessing. As I mentioned earlier, blue and brown switches are now available for the same cost.

Aside from the first glance, everything works just as it should. However, that all changes when you plug the keyboard in and download the Corsair CUE software.

This robust software is what enables the 16.8 million colors and allows you to program it to do endless special effects. A rainbow wave, blue and white ripples when you hit a key, any color gradient combination…these are all just some of the possibilities this keyboard allows for and that is what makes this keyboard unique.

You can set any key to any color, or group them up for specific games and profiles. For instance, if you are playing CS: GO, you can make the WASD keys red, the reload button green, the jump and crouch buttons yellow, and the number keys for switching in your inventory yellow, while adding numerous effects and colors to the other keys not in use.

For any PC gamer looking to upgrade their keyboard to something flashy and aesthetically pleasing to match the rest of the keyboard, this one is a no-doubt purchase.

Upon release, Corsair took some flak due to the month delays in the release. They blamed it on perfecting the software, which is understandable. The software is this keyboards biggest downfall. While it is what makes this keyboard shine, literally, it is flawed, buggy, and more confusing than you can imagine.

It takes a few hours, whether you are experienced or not with software, to learn and figure out what you want to do. The effects are already listed for you, but it’s the programming and assigning the effects, keys, and colors individually that make it a bit intimidating. On top of all that, the software allows you to add macros, change key functionality, profiles for different programs, mouse settings, and anything else that comes to mind.

When it is all said and done, I think this keyboard is worth the money, but only if you want the aesthetics factor for your setup.

The Razer Blackwidow Chroma and the Logitech Orion Spark are two competing keyboards that have since been announced and released to compete with the K70 in the 16.8 million RGB LED lighting category, so it will be interesting to see who comes out on top.