‘How to Fight Presidents’ mixes humor with bad ass history

Cracked writer Daniel O’Brien really likes presidents. This is not an exaggeration. Besides being a comedian, he has also been a consultant for the history channel and an author.

As a person who loves history just a little bit too much to be considered normal, I picked up the book as soon as I saw it. O’Brien’s writing mixes historical fact with humor and entertaining cartoons. Thinking of the presidents as superheroes (or villains if you’re a communist or a red coat) makes some of their outstanding achievements seem more entertaining.

The book tackles presidents up until the 1960s and throws out facts that you won’t find in a normal history textbook. Did you know that Jefferson invented a rolling chair? How about the fact that when Jackson ended his presidency he said he only had two regrets, “I didn’t shoot Henry Clay and I didn’t hang John C. Calhoun.” 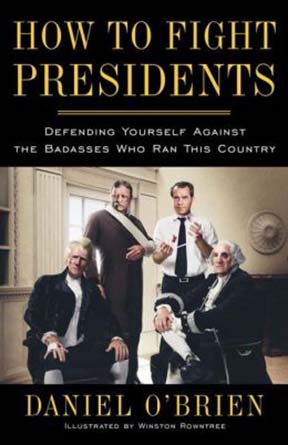 King of Camelot John F. Kennedy once saved a fellow crew member when their ship was basically torn in half, dragging him to shore by a rope held by his teeth. John Quincy Adams kept a pet alligator in the White House.

And let’s not forget the king of bad ass presidents, Theodore Roosevelt. Although the teddy bear was named after him, something so cute and cuddly gives the wrong message. He was a champion boxer, a black belt in jujitsu, owner of a pet bear, blinded in one eye from a boxing match he held in the White House, and strong enough to get shot during a speech and finish the speech before seeking medical attention. What have you done lately?

O’Brien shines a light on the crazy side of history using a unique lens of humor to distract the reader from the fact that our country was probably in jeopardy several times because an egomaniac who ran it wanted to do something “fun.”

O’Brien needs to put out another book and pick up where he left off. He could do a lot with some of the other historical figures in America, except maybe our last three presidents: a saxophone player, a male cheerleader, and some dude from Hawaii.

The only warning label I’d place on this book is a language caution. The rhetoric isn’t great for young kids.

If you appreciate the humor of cracked.com or their other publications You Might be a Zombie and Other Bad News or The De-Textbook then this is a great gift for a history buff with a sense of humor.