Does the ‘American Dream’ symbolize freedom? 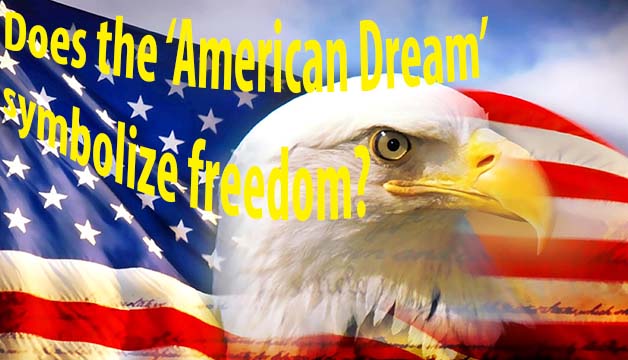 There’s this ideal in the minds of Americans: A vision. An idyllic normalcy.  A widespread societal acceptance of the standard, the average, and the mediocre.

Something called the “American Dream.”

In the most fundamental and traditional sense, the “American Dream” is the idea that hard work and opportunity produces a happy and fulfilled life.

This notion, accepted by most, drives our ceaseless desire to create some archetypal lifestyle that coincides with the lifestyle of others who have also bought into this nationalistic mantra never meant to be the model for modern human existence.

The “American Dream” strives for similarity. For likeness. For having what your neighbors have simply because they have it. For doing what your parents have done because its what their own parents did.

We are asked the same tired question that generates the same tired response- some version of “What do you want to do in your life?” I can already guess at what everyone “thinks” they want in their lives.

First, they want to get a job straight out of college because you “have to.” You have to write a resume. You have to interview. You turn in your formatted white piece of paper on top of two hundred other formatted white pieces of papers and you wait for someone to call you and tell you that your grey pant suit and your cover letter buzz words stood out against the rest of the worlds’, and for that, you are hired.

You go the flow. Your life is pre-mapped out and your big “life events” directly correlate with whatever options Facebook suggests is important and noteworthy on your timeline. Buy a house. Get a dog. Get married and have two kids. Buy things. Buy a lot of things. Go on vacation. A week long vacation, tops.

It’s the no-fail plan to happiness and success, isn’t it? I guess so. If those are the things we really want. But I suppose none of us know what we really want. We do know what is wanted FOR us, but until we let go of the stereotypical idea of the “American Dream,” what we have is merely a beaten path. Somebody already took that road, and you know what? You don’t have to.

Doesn’t it seem a little ironic now in saying, “don’t do things because other people are doing them.” That really only ever applied to dumb decisions, didn’t it?

If anything, the “American Dream” is a how-to guide on living a life that someone else chose for you because you didn’t know you had any other options.

You complained about college for four years, do you even really want to go to grad school or is that just the next step?

The “American Dream” is a template. Somebody’s rough sketch. It’s a real vague study guide for a test that nobody has the answers to. It has to be. “The American Dream” isn’t my dream and it likely isn’t yours. It might not even be in America for all you know.

And I don’t think that’s stubborn to think like that.