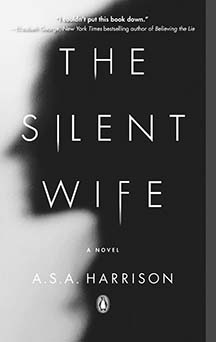 The Silent Wife by A.S.A. Harrison

Normally, I’m a mystery novel fanatic. Picking up A.S.A Harrison’s “The Silent Wife” seemed like a good choice to me at the time. I was wrong.

Harrison is trying far, far too hard here to be the next Gillian Flynn. This book is no “Gone Girl” and the characters are rather flat and not enticing at all.

A husband and wife at odds, a divorce at stake, a child on the way: these all seem like things that could cause an epic showdown between married couples.

This couple however, Jodi and Todd, take things in an odd direction.

Jodi tolerates his bad behavior. As a reader I wanted to scream at her.

As a psychologist, she should recognize signs of co-dependency, delusions, seclusion, a mid-life crisis and she should theoretically know the dangers of keeping ones feelings all bottled up with no release.

Not only should she recognize these things, but she should at least know how to get help to handle them.

Not Jodi though, she is practically a glorified house plant.

Todd isn’t much better. The reader is supposed to hate him, or at least be disgusted by him.

The feeling of revulsion got through, but Todd wasn’t someone who made me want to root for one side or another in this split.

On top of all of these issues, the book has several false starts. Something happens and the reader’s inner monologue changes to, “This is it! This is when it all goes down.”

After four separate occasions of this happening, I was left with frustration and more of Jodi’s inner monologue describing her terribly boring day.

Even the ending is anti-climactic. It should have ended about thirty pages earlier.

The “little twist” ending Harrison tried to throw in just diluted the power the coup de grace action scene of the whole novel had.

Don’t pick up this book. Although it’s thin, it’s not worth the time. So much more could have been done with the story line, but instead it ends on a note that contains less drama than a day time soap opera.