Filter or not? Inside look on recent model ads 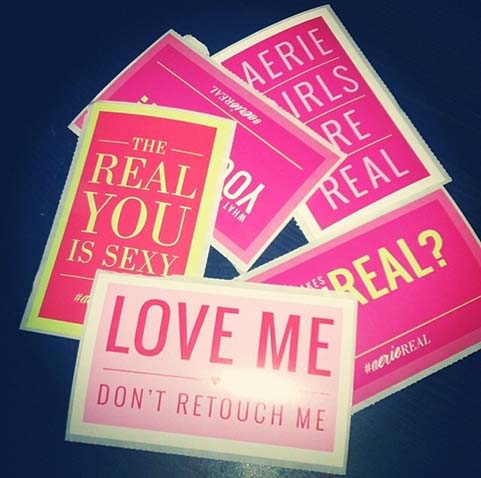 Despite the claim to advertise “real girls,” companies such as Aerie and Victoria’s Secret are still failing to successfully promote realistic ideas of beauty.

We are all very, very much aware of the Victoria’s Secret Angels: beautiful women who are no shorter than 5-foot-9,  extremely thin, toned, tan and hot.

Many refer to these “angels” as perfect, flawless beings. They appear in countless advertisements, in catalogues and of course, on the runway.

For Victoria’s Secret, the largest American lingerie retailer, this marketing tactic is highly effective. The women are poised, confident and glowing in their work. They have to be. It is a job requirement so that the company can be as successful as possible- and they are.

Because this is America, our women have been convinced that VS “angels” are symbols of true beauty.

For the PINK clothing and accessories line catalog and ads, young women are used instead of angels. These models are more realistic, if you will. They’re more of what you’d see on the street, not on the catwalk.

Still, the younger models are thin, toned and healthy looking, but their bodies are still airbrushed, manipulated and highlighted for the ads to create that flawless look.

Many criticize this technique as a corruptive strategy, claiming that the use of perfect models in marketing campaigns may causes young girls to think negatively of their bodies, which may not fit the American image of “beautiful.”

The argument is that marketing thin, pretty models will cause girls and young women to look down on themselves, enough for them to potentially contract eating disorders or unhealthy lifestyles to try and fit that American vision of beauty.

Aerie, the lingerie brand of American Eagle, strongly believes in this argument, or so they say. Aerie, in an attempt to boost sales, recently launched the “Aerie Real” campaign.

This campaign uses “real” girls, or models that are not airbrushed or digitally enhanced in any way for the advertisements. Aerie is trying to tell girls and young women that they can be beautiful in lingerie and cute pajamas too, even if they aren’t super thin and toned like airbrushed models generally are.

So the result is a set of ads portraying everyday girls that have thicker midsections, birthmarks, lines and divots on their skin- features that many and most people have. Aerie even left the girls tattoos alone, claiming that the un-manipulated body, no matter what it looks like, is real beauty. What a fantastic way to think.

It is a good message for the younger generation, but as a whole, I think the campaign fails.

This isn’t a compassion campaign. At the end of the day, Aerie isn’t really interested in the happiness of their teen customer base and how satisfied they are with their bodies. They’re trying to make money.

The girls that Aerie used for the new campaign aren’t realistic either. They’re not sticks but they’re still relatively thin compared to the national average. Plus, the girls were still acquired as models.

Aerie continues to use pretty, thin girls on their website to model the lingerie too, which doesn’t really back up the campaign at all, now does it. It’s almost as if the company is limiting the campaign because too much “real” would not advertise their products effectively.

The campaign is only a single step in the right direction. Young women should believe they’re beautiful because a mall store mass commercialized that message to them? I don’t think so.