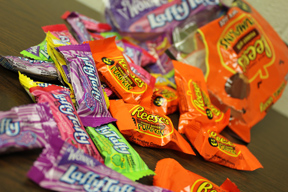 Chilly nights, candy, pumpkins, costumes and trick-or-treaters. These ideas come to mind when Halloween is discussed. This holiday, celebrated on Oct 31, is thought of to serve as a time for children to dress up as someone else for a night, and to walk around neighborhoods while asking for their favorite treats.

The idea seems typical and harmless. I’m sure at one point in your life you couldn’t wait to dress up like your favorite athlete, movie character or superhero. Lets face it, no matter what food preferences one has, every child can enjoy at least one of their treats. Most of the time the parents get a treat, too.

Recently new words have been added to the plethora of Halloween- oriented words. These words include “safety” and “religion.”

If you think back to your elementary school experiences, you probably remember having a some sort of Halloween parade or party. The idea of “canceling Halloween” was most likely not even something that was considered at the time.

According to Time Ideas, schools around the country are attempting to ban costumes and candy on Halloween.

Schools are concerned for the safety of the students in regards to food allergies and some schools are worried that Halloween promotes the idea of separation between church and state.

Sporting Hill Elementary School, located in Penn., sent a letter home to parents explaining that Halloween costumes would be banned from school.

The school explained that the costumes would be banned because safety was theschool’s number one priority.

A school located outside of Philadelphia, Inglewood Elementary, followed in Sporting Hill’s footsteps by removing candy from the Halloween festivities.

Inglewood realized that some students had peanut allergies, and they did not want to take the risk of having a student accidentally become in contact with peanuts.

According to Time Ideas, the school’s principal then wrote that “some holidays such as Halloween are viewed as having a religious overtone, and that the district must be mindful to the sensitivity of the community.”

Time Ideas included an interesting statement that explained that the enrollment of students in charter schools was increasing.

To further explain this, charter schools are similar to private schools, due to the fact that parents can choose to send their children to the school of their choice depending on how well their views relate to those of the school.

This idea seems to be getting somewhat out of control. If a child is placed into a charter school, it should be based on the educational aspects, not whether or not Halloween is celebrated.

Whether Halloween is actively celebrated in schools or not, at some point in their lives children will be faced with challenges and situations in which they are not comfortable.

Hiding these realities does not help the children, nor does it allow the children to enjoy the “fun” aspects of growing up and being a kid.

An essential part of childhood are the memories that you create to mold you into growing into an adult.

Learning to accept other views, and realize that your beliefs are acceptable as well, also factor into how a child learns to “deal with the real world.”

Instead of ruining the children’s childhood experiences, better them by teaching them to adapt to real-life circumstances.