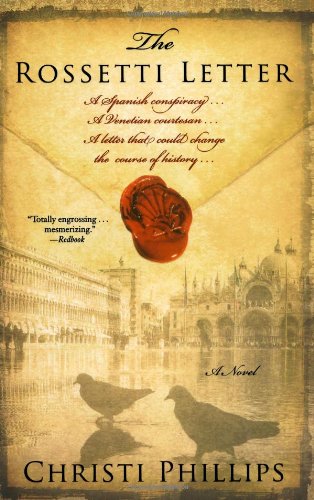 I absolutely love historical fiction. To me, nothing is better than being transported back in time to a place inaccessible to modern travel and culture. In “The Rossetti Letter,” Christi Phillips latches onto a piece of history that not much is known about, making her story even more gripping due to the fact that there is just the slightest possibility that her tale of mystery, spies, courtesans, and intrigue could be true.

The novel bounces between the present world and 1618, the year of the Spanish Conspiracy. Phillips’ modern day character, Claire Donovan, is a Ph.D. candidate, working on her doctoral thesis in history that focuses on a letter written by a courtesan, Alexandra Rossetti, that revealed the plot of the Spanish to the Venetian council. When Claire finds out that a famous historian has taken an interest in the subject as well and will be presenting a paper in Venice, she decides she must go and find out how the noted historians paper could derail her years of hard work. The only way she can get to Venice, however, is to baby sit a teenage girl named Gwen the entire trip.

In 1618, Alexandra Rossetti is struggling. She is a single woman without her family, and she is reluctant to leave her home in Venice. When she meets a beautiful woman who says she can help Rossetti keep her house and life, how is she supposed to turn down the offer?

Rossetti then becomes La Sirena, one of the most famous courtesans in the Venetian history. She is courted by all of the Spanish ambassadors, and tries desperately to keep her nose out of trouble. However, when she meets the nephew of one of her customers and falls in love with him, she puts herself in danger.

As the stories of the past and the present intertwine, revealing history to the reader and to Claire, the story picks up in intensity, leading readers down a path of unseen history as it forms. One of the interesting parts of Phillips’ writing is that Claire finds out certain aspects of the real story, but not everything. The chapters where Alexandra takes over show the full history, including things that Claire can only speculate about.

This novel was long, but it kept moving at a good pace. The action wasn’t forced, which was a relief, and the history was based around an event that I didn’t know as much about. Phillips portrays 1600s Venice and present-day Venice in such a way that the reader can’t help but feel entrenched within the aqueducts of the wondrous sinking city.