The 10 Commandments of Movie Theater Etiquette 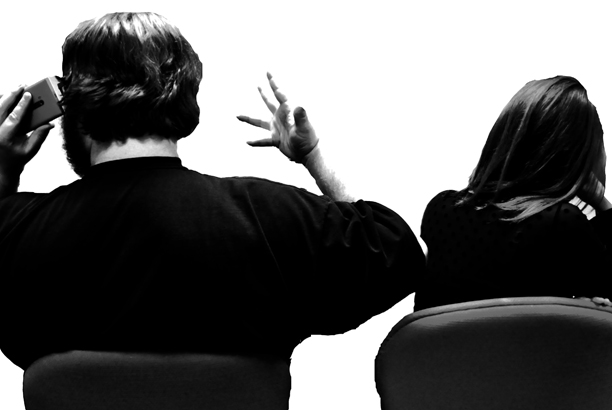 As Blu-Rays replace DVDs and NetFlix and other streaming services replace Blu-Rays, there is at one least one constant in the world of motion pictures that can likely be counted on to withstand the effects of time: The in-person movie-going theater experience.

There’s simply nothing quite like going to a multiplex, plunking down your hard-earned cash for a ticket and some popcorn, entering the dimly lit theater, finding a seat, sitting down among however many other audience members there are and being bombarded with sights and sounds on a larger, more immersive scale than even the most bombastic home-entertainment system could replicate.

It’s a transformative experience in many ways, not unlike dreaming. It takes you out of the real world and into a darkened chamber, separated from outside reality. When the movie begins, a new reality takes over, one composed of imagery and audio that isn’t really there, like hallucinations on a screen.

The unreal becomes real, if only for a time. In some way, the enormity of a movie – enormity not only in terms of experiential size, scope and depth but also in terms of dramatic, emotional resonance – makes it more real than reality for the time that it dominates your existence.

Seeing a movie in the theater is also a communal experience, like taking in a stage-play or attending Sunday mass. We look at multiplexes and see gaudy flashing lights and exploitative advertising, but scratch the surface and underneath we find a church. The theater is a temple of imagination.

Ultimately, these are common ideas, though admittedly not often expressed in such a grandiose way. Deep down, many of us hold some reverence for the movie theater, treating them with a certain sense of sanctity not lightly violated. Alas, not everyone understands or recognizes the unspoken scripture.

That’s the drawback of the communal experience. By its very nature inclusive, that inclusivity opens itself up to tranquility-destroying forces embodied in the form of junior-high revelers who put their feet on the back of your seat or slow-witted but loud-mouthed blobs who take the idea of movie-as-new-reality too far and think they can actually have a conversation with the characters onscreen.

Here, then, is The Beacon’s 10 Commandments of Movie Theater Etiquette. Take heed, and do not ignore these simple but oh-so-sacred laws. Otherwise, you will surely go to Movie Hell, where forever roast the scorched souls of noisy soda-slurpers, inconsiderate text-message addicts and fans of “director” Michael Bay.

Commandment 1:  Thou shalt not arrive to the movie late

You wouldn’t start reading a book two chapters in, would you? Then why would you sit and watch a movie that’s already been going for 10 minutes? Both tell stories and both introduce crucial information at the very beginning. Coming into a movie late displays disrespect toward the story itself and the work that went into its telling. It’s also disruptive to those who have already become immersed in the unfolding narrative.

With a book, if you start two chapters in, you can instantly flip back a few pages and start all over. If you miss the beginning of a new movie playing in theaters, you’ll likely not see that movie again nor have the opportunity to catch up on what was missed until the DVD is released months later.

This operates on the same principle as the first commandment. It’s disruptive to the audience members around you and also disrespects both the film and the filmmakers. If you absolutely have to leave due to an emergency or other pressing concern, then suck it up and stay gone. If it’s not an emergency, there is no excuse. Go the bathroom and get your snacks first, not in the middle of the big plot-twist at the end of the second act.

If you leave and come back, you’re disrupting and disrespecting not just once, but twice. ‘Nuff said.

Commandment 3: Thou shalt not bother thy neighbor for explanation as to what thou missed

If you dare to commit violations of the first and second commandments, or are simply too easily distracted to pay attention, don’t expect the person sitting next to you to fill you in. It’s not their responsibility and will only cause them to miss out as well.

Commandment 4: Thou shalt turn off thy damn cell phone

If it rings, that’s bad enough. If you answer it, that’s worse. Don’t just switch it to vibrate, because we can all hear that too. And don’t use it to text message. That brightly lit little screen is like a bug zapper, it’s unavoidably magnetic and ultimately destructive. Everyone around and behind you can see it, and all those people want to wring your neck.

Commandment 5: Thou shalt leave the theater in no worse condition than when thee arrived

This is just common courtesy. Remember, the theater is not your living room. Someone has to pick up the mess you leave behind. Hold onto your empty cups, popcorn bags and candy boxes until the end of the movie. Then throw them away on your way out. Don’t just crumple them up and shove them between the seats or toss them on the floor, and take care not to spill your crap all over the place. How’d you like if someone pulled that in your living room?

Commandment 6: Thou shalt honor the “courtesy seat” between thyself and thy neighbor

This law isn’t always applicable, especially on Friday nights when a highly anticipated new movie is freshly released and the theater is packed to capacity. But, if you can, leave an empty seat between yourself and the stranger next to you. No one welcomes the awkward proximity of someone they’ve never met in a darkened room, and no one likes fighting over armrests either.

Commandment 7: Thou shalt not put thy feet upon the headrest of the seat in front of thee

That’s someone’s skull you’re framing between your muddied up, dog crap-stinking Reeboks.  Remember that, or you might end up getting a good stiff kick to the head yourself.

Commandment 8: Thou shalt not bring thy children to the theater unless thou can control them

The movie theater is not a daycare center. The other audience members aren’t babysitters. If you can’t control your kid, don’t bring the li’l rug-rat with you. The last thing anyone wants to hear as Aragorn and Arwyn are lamenting their forbidden love is some barely-out-of-diapers brat shrieking about wanting another bag of Sour Patch Kids.

Commandment 9: Thou shalt not bitch about pre-movie advertisements or the cost of admission

Movies and other form of art are a privilege that we enjoy, not a right. If the thing that allows us to partake in such an ultimately extraneous, indulgent form of entertainment as movie-going is the revenue provided by a half-dozen big-screen commercials for Colgate and jacked-up 3-D ticket prices, then that’s a necessary evil you should grin and bear. There are cultures that don’t have access to this kind of modern technology and carefree living whatsoever. Remember that before you whine.

Besides, you can’t really blame anyone else but yourself. If you put up with it, then you’ve basically accepted it and given the powers-that-be the big A-OK to continue. If admission is too expensive or you feel the entertainment value of a movie isn’t worth the inconvenience of watching Martin Scorsese shill for American Express, then why are you even there? Don’t just be a blowhard. Vote with your dollars.

Commandment 10: Thou shalt shut the hell up

This is the final and most important commandment. If you have to talk, keep the conversation short, quiet (anything above a barely audible whisper is totally unacceptable and will be dealt with harshly) and with someone you actually know. Don’t ask stupid questions. Don’t offer your predictions. Don’t crack jokes about the movie loudly expecting everyone else to laugh. You’re not as funny as you think you are.