The Graveyard Shtick: Where do we stand? 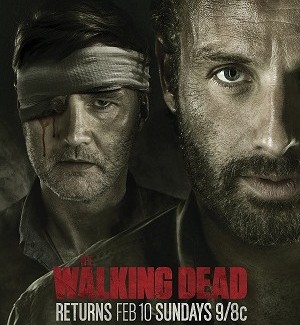 So now we are within sniffing distance of the “new” season of “The Walking Dead.” It’s not actually new, it’s just the restart of the season in progress. That’ll be important, but we’ll come back to that. In due time.

But back to sniffing distance, the scents that will be refilling and bombarding your olfactory senses are those familiar odors of death, anger, revenge, tough decisions and of course, rotting corpses.

When the series starts back up, one is safe to assume we will continue right where the cliffhanger left us, with the people of Woodbury chanting and raving that The Governor should kill the “terrorists” that are Daryl Dixon and his “turncoat” brother Merle Dixon.

With an episode titled “The Suicide King” and no comic precedent for that name one can assume that an event that did not happen in the comic is about to happen, especially since the scene is primarily comprised of a Bizarro World version of the comic. With the two main characters not existing in the comic, The Governor being maimed far earlier in the story arc (or maybe right on time depending on pacing) and the whole Andrea in Woodbury and shacking up with The Gov, it’s safe to say the comics will be no help in figuring out what is about to happen.

But luckily we have our good friend the Internet, and the internet has found some clips of the new episode where The Gov instructs the Dixon brothers to fight to the death. The ultra obvious answer to what happens next would be one of the brothers being an honorable man decided to hara-kari himself and thus become “The Suicide King,” but that’s too obvious, and just bad writing. The fans love Merle even if he is Nazi white trash, and wouldn’t want to see Merle be Merle’s undoing in such a direct way.

So taking the idea of “The Suicide King” and expanding it, I think this refers to The Gov’s run in with Michonne and her taking his eye with the sword, much like the playing card, the King of Hearts, with the whole sword to the head thing. But this just seems like the type of important unimportant title work the series seems to have done.

But enough about Woodbury, Rick, Maggie, Glenn and Michonne are still out venturing and would be assumed to be heading back to the prison to regroup and re-attack Woodbury, then again they might just attack as soon as they can again and not go back to the prison in hopes of getting Daryl back, it doesn’t seem to be terribly clear where they are headed.

One thing is clear though and has been confirmed by Robert Kirkman, and it’s that comic book fans will be getting their “Christmas special,” for those of you that have not read the comics, get your act together, but this refers to Morgan and Duane Jones.

Morgan and Duane were the first people that Rick had contact with after he left the hospital and Rick left them in hopes of finding his family, but when he went back to get them, some time later, he finds that Morgan’s son Duane has been turned, but Morgan has been keeping him alive.

I partially doubt and mostly hope they don’t do the exact same thing, maybe Morgan is dead and Duane has kept him around, maybe they are both alive, any way it happens though, I’ll just be happy to see the new characters and the ride out to get them, so look for that in about the third episode, since that would have aired around Christmas if they played the season without dividing it up.

But keeping with the theme of new characters, back at the prison Carl has laid down the welcome mat for the comic favorite Tyreese, and he’s in company with his sister Sasha and a now no-longer full family unit of Allen and Ben. While all of these characters except Sasha have a direct comic base they all appear much different except Tyreese who is the spot on rendition of his comic counterpart.

Allen was the father to Billy and Ben in the comic, however Allen was a much more portly man and Billy and Ben were about five years old, when we see them in the TV series Allen is of a normal to skinny build and his son Ben is about 17 years old, this will probably lead to a much different dynamic than the comic to say the least.

While we do not know much about these characters we do know that Allen just lost his wife due to a walker bite, and we may or may not see them put her down, but we do know that while they are trying to bury her in the yard Allen gets the idea to try to take over the prison since the only people there are Beth, Carol, Carl, Hershel and Axle which isn’t exactly the all-star cast.

However Tyreese and Sasha object, but this is all we can gain from this clip, and I’m sure we’ll see this little coup crushed, or the early death of Allen.

But with all these factors “The Suicide King” will be set to debut this Sunday night at 9 p.m., with “The Talking Dead” right after at 10 p.m. with a full hour of discussion. At this point the jury is out on whether or not to throw Chris Hardwick to the walkers. Let’s just say Merle and Daryl won’t be the only ones getting “kill them” shouts directed at them Sunday.