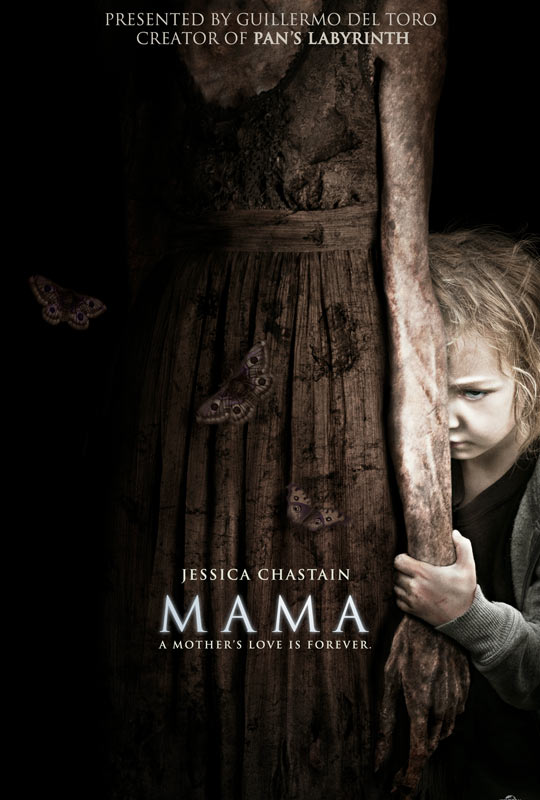 NOTE: IF YOU HAVE NOT SEEN THIS MOVIE, SOME SPOILERS LIE AHEAD.

The new horror film, “Mama,” focuses on two small sisters who are left alone in the woods for five years and cared for by the spirit of an institution escapee, who the girls refer to simply as “Mama.”  The spirit desperately wishes to find the body of her own child, from whom she was separated during her escape prior to their death, but she also clearly loves the two feral children. Mama is content…until the girls’ uncle locates them after a years-long search and he and his girlfriend gain custody of the children.

There are things about this movie that I disliked, but I did approve of the ending. Unlike many horror movies, which adhere to a tried-and-true formula—ghost wants something, characters give ghost what it wants, ghost leaves without making more trouble— “Mama” ends more realistically. Although the girls’ “rightful” guardians recover the body of Mama’s long-lost infant and present her with it, Mama is only temporarily moved by the reunion. As soon as she hears a cry from Lily, the younger of the two girls with whom she was notably closer, she loses interest in her own child and abandons the remains to come to the call of the little girl she raised for five years. After searching for the remains of her biological child for over a century, Mama unexpectedly changes her primary drive and becomes determined to retain “custody” of Lily no matter what. Furthermore, Lily is perfectly receptive to this and obviously prefers Mama, however disturbing the ghoul may seem to the moviegoer, to her new family.

This aspect of the storyline makes some pretty clear statements about the nature of parent-child attachment/bonding. I’m taking a bit of leeway here in projecting human bonding processes onto a specter, but since we’re already starting with the notion that ghosts exist, I think it’s not uncalled for.

First of all, we can assume that Mama did not experience the social and biological factors that normally promote bonding with her own infant because it is heavily implied that she and her child spent only one day together. This was the day he/she was born, which is also the day Mama kidnapped him/her and fled the asylum, immediately before their deaths. Although she experienced gestation and childbirth, which contribute hormonally to bonding, she missed out on other important postnatal factors such as learning to distinguish her child’s face and other characteristics, mutual eye contact, breastfeeding, general physical closeness, etc. It has been shown that lack of these experiences can cause an animal to reject its young in nature (Kikuchi n.pag.)(Broad n.pag.). This should make it less surprising that the joy and closeness Mama expected to feel once reunited with her baby were significantly muted when it finally happened. On the other hand, Mama experienced all of these bonding processes with Lily. Well, we can exclude breastfeeding, but the film does imply that Mama nursed Lily with part of her own being, an act that’s strikingly similar to and possibly meant to simulate breastfeeding. (In the movie, Mama occasionally materializes as a cloud of moths; Lily is also occasionally shown eating these moths.)

It helps that Mama encountered Lily when she was basically an infant at about one year of age. All infants are designed to prime feelings of affection in adults. The set of physical features common to all babies is what all humans automatically perceive as “cute” and activates brain areas associated with reward, creating motivation to be caring toward babies (Glocker n. pag.). This is why they are so universally adorable, even if they are not yours biologically. This would certainly make Mama more receptive to bonding with Lily. Human infants will also accept affection from just about anything while they are within a certain age range. Bonding is best able to occur before three years of age. Before about six months, kids will respond positively to being given food and affection regardless of the source.  Between six months and two years, they gradually begin to distinguish between caregivers and choose one or a few preferred ones (Prior 19).  Lost in the wilderness at approximately one year of age, Lily was too young to have memories of her biological parents. She was getting past the age when children respond to care completely indiscriminately, but she was still well within the range when children choose their preferred caregiver and begin to actively seek proximity to that caregiver. In her case, Mama and her sister were the only two available parties with whom she could bond, and since both were caring and attentive, they would have made great candidates anyway. It’s not unbelievable, considering that various feral children have been raised successfully by wolves and other animals.  If it has a face and it gives you food and cuddles… you can bond with it (Dvoskin n. pag.).

And Lily has bonded. She’s well within the criteria for secure attachment. She prefers Mama to be around but is not completely distraught during scenes when Mama is away, able to function with the expectation that the trusted Mama will return. She typically rejects the advances of her new mother figure, Annabelle, with an attitude of suspicion. Whenever she seems irritable, she brightens immediately when Mama comes around. Sounds like she passes the Strange Situation Test to me (Aisworth, n. pag.).

When film events are viewed in this way, it becomes clear that for the filmmakers to have concluded the script in adherence to the usual formula would have been absurd and unauthentic. This ghost would not be placated simply by finding her infant’s body because she did not bond with that child, although it was her own. Lily is the child with whom she had a genuine, meaningful attachment.

It also makes sense in the light that Mama is obviously a sentient/conscious being, consciousness defined by the APA (American Psychological Association) as “a state of awareness of internal events and of the external environment” or “whenever an organism at a given moment of stimulation shifts from being ready to respond in some relatively less differentiated way to being ready to respond in some relatively more differentiated way” (Glossary, n. pag.)(Tolman, n. pag.). The formulaic approach makes sense only in stories in which the “psychic imprint” theory applies. This describes a scenario in which a haunting consists of a barely sentient or non-sentient entity, merely a memory trapped in time like a tape recording (Psychic n. pag.). If this were true, Mama might be made content by something as simple as being given the remains of her infant, but Mama is conscious and has her own psychology. She is a thinking being whose experiences influence her behavior, basically the same as a living human, and her experiences clearly dictate that she should have a stronger emotional tie to Lily than her own child, whom she was with for only a day.

It likewise makes sense that Lily, who had no memories of her real mother, was exposed to Mama during the correct age range, and received appropriate care and affection from the spirit, should bond with Mama and prefer her to other caregivers. She’s definitely a “Mama’s girl.”