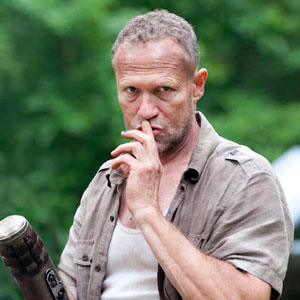 Since Season Three has started, there has been tons of action – literally get a scale and weigh it, it’s far more than tons – but it’s not going to stop anytime soon.

We’ve seen a #oneleggedhershel, and the introduction of two brand new characters, followed by their almost immediate deaths. First we loved and lost the somewhat ill-prepared oaf Big Tiny, then violent prison head-honcho Tomas – a composite of the comic book’s serial killer Thomas, and the mutiny leading, Rick Grimes-hating prisoner Dexter – bit the dust, too. (Don’t worry; we’ll come back to this at a later date.)

The producers of the TV show also did a grade-A job of having Andrew die in a similar fashion to his assumed comic book counterpart, again furthering the idea that Rick Grimes is no longer a Socratic Reasoning-type of leader and that he will not deal with anyone’s disloyalty.

We’re also seeing some, dare I imply, more-than-friendly caring from Michonne toward Andrea. Also, Michonne has yet to be addressed as such on camera, making those who are brazen enough to post online but too dumb to watch the credits, to continually address her, somewhat affectionately as, “the black samurai ninja lady.”

But enough recap! Time to get out the crystal ball and start making some predictions that may have people thinking that were inspired by the use of a certain other kind of crystal.

So next episode it’s been revealed that Merle Dixon will back, and it appears he’ll be working as a recon man for The Governor. The Governor will also be making his first appearance next episode as he will presumably be showing Michonne and Andrea around Woodbury.

With the combination of The Governor and Merle Dixon, the show has the possibility to go down a very depraved road very quickly. As previously hinted by HERE, I foresee revenge. While I predicted Rick Grimes to lose his hand as he does in the comics, there’s been another prediction that’s gained some heat online but makes tons of sense.

For those of you who love the cute little creatures of the world and believe in peace and love, this is the point you should stop reading and break your computer screen.

Okay, here goes: How brutal and crazy would it be if Merle killed Lori’s baby?

Would anyone really put it past him? I think Merle Dixon could kill a baby, or even execute an extremely late-term abortion by just punching Lori in the stomach over and over and over. This would be incredibly hard-hitting (no pun intended) to the way the group develops and would catapult the Woodbury-versus-prison arc, plus it would just give even more depth to the Merle and Daryl relationship, as it has been somewhat noted that Daryl doesn’t seem too fond of the idea of what he calls “little Shane.”

To extend upon the idea of Daryl and Merle, I can see Daryl eventually cracking and somewhat taking the side of his derelict brother and The Governor. Not exactly taking out Rick Grimes and toppling their civilization, but I don’t think he will be a soldier on the front lines for this battle as people are expecting.

I think once Daryl sees that he doesn’t have to defend this group with the ferocity he has been, and that his brother is still alive and he has options, he will more likely weigh his options and maybe ride off and become the scum he was before.

On the topic of the “black samurai ninja lady” and “the annoying lady that kept trying to kill herself,” as the more uneducated fans tend to refer to them, there will definitely be a ton of bonding this season between those two. The rumor mill online is saying that this bonding becomes more than platonic after the break.

This gives Andrea and Michonne a ton of time to develop as characters, maybe even long enough to actually say Michonne’s name on air. Maybe they’ll reunite with the original survivor group, but I don’t think we’ll see the latter this season.

My final predictions for this season are those of a more grave nature. They are the predictions of death, and since the writers of the show seem to be disregarding the way the comics have been going, it would only seem fitting that they kill off some of those pesky surviving characters.

I think the Greene family will have seen much better days after this season. Beth’s days are easily numbered. The show has had a history of killing off the younger characters and Beth is far more disposable than Carl, so look for her demise very soon.

Robert Kirkman, the comic creator and one of the show’s writers, is a notorious troll. He oftentimes shows things that insinuate a false sense of danger or security. So without a doubt Maggie Greene appears to be far too safe as a character, with her being alive in the comics along with Sophia. It seems only reasonable to kill them off on the TV show. After all, people love her as a character, and Kirkman loves to kill the things we love. (RIP: Tyreese, Abraham, Dale and the owl from the opening sequence of Season Three.)

The death of Maggie would leave Glenn somewhat depressed and the TV fans would slowly forget him, which would be the perfect time to get rid of Glenn. The comic series has a large turnover in the characters. Only, Rick, Carl and Andrea remain from the original Atlanta group in the current issue. So, sadly, the TV show will probably have to have a large turnover of characters this season, which will have to bring unwanted deaths.

That’s all I can foresee with my all-think-I’m-knowing crystal ball for now. Hopefully I’m wrong about Maggie and Glenn’s death and instead they kill off someone else – maybe Lori – but enjoy the next week’s episode and come back soon for some more The Graveyard Shtick.