The Graveyard Shtick: A grave approach to… Carol Peletier 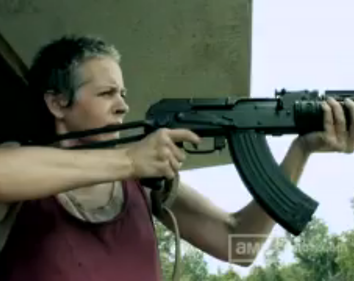 This week Carol Peletier is in the sights, and if you’ve only seen the TV series this probably doesn’t seem to make sense. After all, we haven’t even talked about Lori, Glenn or Maggie yet. Hell, we even skipped over Hershel. Foror Carol?!? The lady who just cries about how her daughter is gone and has basically been a non-factor since the show began. Why are we analyzing Carol?

To answer your demands, angry reader, this is because the Carol of the comic series is – believe it or not – an incredibly dynamic character whose actions can never be predicted. When using the three typical categories of comparison, basic appearance, personality traits and impactful events, Comic Carol and TV Carol are hardly even the same person.

In terms of basic appearance, Carol’s literally bare-bones look in the comics is executed alright, in the way that she’s a woman of a slender-ish build, around relatively the same age, with blue eyes. That, however, is about where the visual similarities end. Comic Carol has a soccer-mom type blonde hairstyle while TV Carol is graying. In Season Three of the TV show, her hair is, in fact, completely gray with a short militant buzz-cut.

Neither Carol has any outfits that could really be considered trademark. Not to the point where they need to wear a certain something or other for audience to realize that it’s supposed to be them. This is especially true when it comes to the prison arc in the comic book, wherein practically everyone ends up wearing the same thing: Prisoner uniforms. So it wasn’t like the television team really went and offended anyone with its choice for TV Carol’s clothing. Sure, it was different, but it really didn’t impact her much at all.

The next category of comparison, however, is completely different story. That is, Carol’s personality traits. It is here we see that TV Carol is an admitted foil of Comic Carol. Though a drastic change, it is one done with a sense of purpose, providing as it does a new different dynamic within the group. While Comic Carol is initially very calm and collected, only to descend into an utter wreck, completely unpredictable and unreliable, TV Carol starts off as simply a very weak person. This can easily be credited to her waste-of-life abusive husband, Ed.

Once Shane Walsh beats Ed Peletier to a bloody mess in front of the group for trying to strike Carol in Season One, she gets more confident and starts to go off on her own with daughter Sophia. It’s worth noting, by the way, that when the group is attacked in their Atlanta camp, Ed is the first one to go.

With Ed’s death, Carol experiences a sort of liberation when she has to crack his skull open with a pick axe to prevent him from coming back as a walker. She becomes overly passionate and it’s a very powerful scene.  From this point on, she becomes a much stronger person.

The next big event for TV Carol is the loss of her child. Early in Season Two, Sophia runs off into the woods after being chased by a walker and Rick Grimes goes with her. Rick says that he will ward off the dead and that she should run back to the highway and return to the rest of the group.

While we never truly find out what happened to Sophia during in the intervening time, we do know that she eventually ends up as a walker and in the barn at Hershel’s farm. So, yeah, one assumes things probably didn’t go according to plan.

During the time the group is looking for Sophia, Carol develops a liking for Daryl Dixon. She talks about how Daryl has done more for Sophia by looking over her than the child’s father, Ed, had ever done. This relationship has its ups and downs and really can’t be called a relationship but it is somewhat understood that there is a connection between the two that makes it just a bit more than friends.

While TV Sophia goes down a somewhat optimistic path, Comic Carol does the complete opposite. Comic Carol does well for a while in a relationship with Tyrelle. Then Michonne comes along and basically steals Tyrelle from her. This basically spikes Carol down the path to crazy. After this, Carol tries to get with Rick, then she tries to get with Lori (!), then she tries to talk Lori into a mutual marriage between her, Rick and Lori (!!!).

When Lori rejects the idea, it’s basically the last straw for Carol and goes and lives it as though it is her last few days. After seducing the seventeen-year-old Billy Greene (another element understandably not in the TV series), she then decides to walk down to the prison courtyard where a walker is chained up, spouting off a long self-pitying monologue about how judgmental the group has been of her.

While I doubt TV Carol is due to take this route, there’s always the possibility for anything to happen during the television series. Still, I think with the reinforcement of the group and the support of Daryl we will continue to witness a much different Carol Peletier.