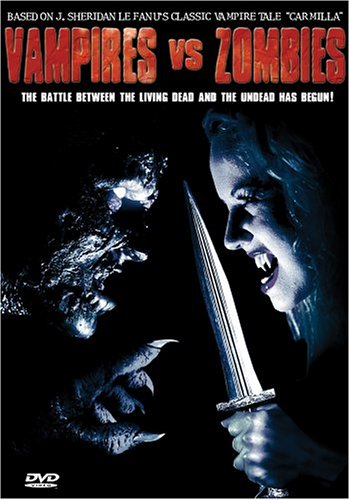 In Favor of Vampires (by Sarah Mitrotz)

Vampires are having a rough time these days.

With a certain book series that shall be not named in this article, reducing them into nothing but cute and sensitive dead people, vampires find themselves falling behind in the horror-creature pecking order to less sophisticated monsters like werewolves, witches and most depressingly, zombies. But, ladies and gentlemen, it is time to remind ourselves of the bloodsucking awesomeness that can only be attributed to this terror of the night.

Sure, their image needs an “Extreme Home Makeover: Badass Edition,” but the very core of the Vampire’s existence is one of sinister manipulation and in some cases seduction akin to even Edgar Allan Poe’s worst nightmares.

Real vampires don’t sparkle in the sunlight, or fall in love with zombie-like actresses; They stalk some poor old lady home from her sewing circle then completely suck the blood out of her body while her cats look on. Real vampires aren’t whiny and angst ridden, they are classy and intelligent beings who have lived for hundreds, no, thousands of years; They are beings who know their way around an angry village mob. They’re strong, fast, and, most importantly, impervious to any primitive weapon our simple minds can hurl at them, except, in some tales, silver and the occasional stake.

The worst (best) vampire of all time is of course the legendary Dracula. So ultimately evil was this mind-reading S.O.B that an entire new, soon-to-be century-old genre was created to explore this creature’s psyche.

Never in the history of horror has there been a book, movie or TV show based on one lone zombie, basically because even the worst horror writers know it would be boring as hell. A zombie by itself is like a single cell of bacteria: a simple, ugly organism whose only motives are eating and reproducing, and who will most likely be killed in about 10 seconds. Zombies are the definition of a flat, one-dimensional character, maybe two-dimensional if you count the drool.

While vampires are cunning lone hunters, the walking dead can only wreak true havoc when they emerge in great numbers usually as a result of some disease, nuclear meltdown or a bath-salt bender gone horribly wrong.  However, a zombie limping alone across someone’s lawn proves pathetically unthreatening. All that a person would need to do is grab the old shotgun and blow a hole through dead Timmy’s rotting eye socket. Problem solved.

Heck, that same person could drive to Wal-Mart, buy a shotgun, buy the bullets, come back to their house and the zombie still wouldn’t have reached the front doorstep yet. This is more of a sad observation on American gun control policy then zombie prowess, though.

On the other hand, when a person sees a vampire floating across their lawn, they pretty much have to cancel their evening plans for the rest of the week.

Perhaps the most frightening part of the bloodsucker myth is also the most human part. Intrinsically, every vampire story stands as a testament to humanity’s obsession with eternal life. The creature embodies the drive in ourselves that dictates how far we will go and what evils we are willing to commit in order to stave off the finality of death.

In Favor of Zombies (by Bill Thomas)

For the record, shotguns don’t use “bullets.” They use shells.

On the surface, vampires and zombies seem to have a lot in common. Both are dead. Both have their roots in ancient supernatural folklore, and both have also been co-opted by modern science-fiction tropes.

One drinks blood, the other eats flesh (or brains, depending on their pedigree). It’s not hard to imagine that if a flesh-eater and a neck-biter met at a chic dinner party in Soho, they’d find a lot to talk about.

In the end, though, that conversation would probably end in a brawl. Because, when you get right down to it, ghouls and vamps? They’re like oil and water, or Republicans and Democrats. Simply put, they just don’t mix.

Obviously, all their similarities are superficial. And, at first, it would seem their biggest differences are as well. But the vast disparity between Nosferatu and the walking dead is about more than just one being sexy, gothic and brooding while the other is putrescent, mindless and butt-ugly.

Ultimately, the zombie is quite possibly the scariest archetypal horror monster of all time, whereas the vampire? He might as well be fangless.

Let’s be honest about it: Chicks dig vampires. Where once they stank of the grave and looked like Hell, now they’re handsome young libertines with perfectly coiffed hair, clad in billowing cotton shirts lifted from the covers of Harlequin romance novels while they wax poetic about the beauty of the night and the sorrow of solitude.

Zombies can never be tamed. They’re too stupid to be tamed. They’re not complex creatures trying to reconcile their humanist philosophies with an inborn bloodlust. They’re simple in the most beautifully chilling way. All they want is to kill and eat. You can’t reason with them or appeal to their deep-down senses of mercy. They just keep coming and they will not stop until you are dead.

Therein lays the heart of what makes zombies so terrifying. See, vampires are representations of sex. They’re all about seduction, penetration and bodily fluids. They’re eroticized. Zombies, meanwhile, can’t be eroticized. Unless you’re a necrophiliac, there’s nothing sexy about a deteriorating cadaver with crumbling, discolored flesh and maggot-infested eye-sockets.

Simply put, zombies are death incarnate. They’re shambling, moaning, funereal reminders of what all life ultimately leads to. There’s no escape from it. We all die. That’s why you can’t reason with zombies. That’s why they’re so relentless.

Sure, they move slow as molasses, but it’s all just deception. They may seem easy to avoid, but they always get you in the end. Always. Don’t believe me? Watch “Night of the Living Dead.” Watch “Zombie.”

Don’t be fooled into thinking you can get away. No one gets away.

Besides, doesn’t the slowness just make it scarier? You know it’s coming and you just want to get it over with, but death has other plans. The dread and suspense are unbearable, perhaps just as devastating as the inevitable, undeniable knowledge that, yes, you are completely and utterly doomed.

Even if you get away from one, there are still hundreds out there waiting for you. What zombies lack in speed, they make up for in numbers. It doesn’t matter how well you might handle one alone, because they’re never alone. What good is running when there’s nowhere left to run? Therein lays the other great elemental fear that zombies embody so perfectly: Conformity.

Vampires are all about individualism while zombies are of a hive-mind. They don’t just kill you, they assimilate you. Zombies represent a loss of identity, one of the most powerful fears in contemporary society. More importantly, though, zombies are a manifestation of “the horror within.”

See, there are two types of horror when you ultimately boil things down to bare bones. There’s the horror without and the horror within. Vampires are the horror without; They exist beyond human capabilities, supernatural foreigners symbolizing something other than, well, us. Let me repeat that: They are not us. Zombies, meanwhile, are the horror within; They are us, the dark part ruled exclusively by a primal carnivore-brain whose only interest, as stated before, is killing and eating.

Zombies are the inevitability of death. They are the violent, hungry impulses we’ve tried to convince ourselves have been replaced by concepts like “civilization” and “evolution.” They are the parts of us that want to go along with the crowd, forgo the emotional rigors of individualism for the quiet, comforting complacence of thoughtless conformity. They are our weaknesses, both physical and emotional, that will be the end of us all.

They are us, plain and simple. A dark and deadly reflection.