The Graveyard Shtick: A grave approach to… Shane Walsh 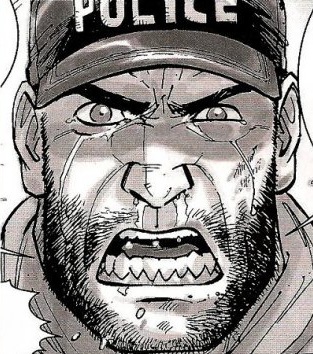 Keeping with the theme of the last installment of The Graveyard Shtick, this week I’ll once again be comparing the comic version of a character to the AMC TV version. In this case, I’ll be comparing, contrasting and complaining about Shane Walsh.

The first and most important point when talking about Shane is that the comic killed him off way too soon to develop him as anything near as interesting a character as he became on the TV series. So the comics are at a disadvantage from the get-go, because TV Shane goes through a much bigger character personality arc.

But first, let’s talk about Shane’s look: Comic Shane never got to have his crazy turn as a shaved-head renegade like in the TV series does. In the beginning, Comic Shane and TV Shane appear essentially off the same. They have longer, somewhat standard-looking hair. They wear a police-issue t-shirt with what one assumes are on-duty police pants. Their hair, face and demeanor are similar enough that you know its Shane when you see him in either version.

The big difference between Comic Shane and TV Shane is that Comic Shane is more than superficial. In the comics, he’s never really a good guy ever. He does things for the right reasons, like getting Rick’s wife and son, Lori and Carl, to safety and keeping the camp safe. But once Rick gets back he really isn’t that excited, to say the least.

I won’t pretend that TV Shane was laying out the red carpet for Rick, but, in the comic series Shane almost immediately goes from, “Oh cool, my friend is back,” to “Lori is mine and I hate you.”

Meanwhile, TV Shane is happy to see his friend, only slowly transitioning into the idea that Lori and Carl “belong” to him and that Rick can’t effectively protect them. TV Shane is a far more likable guy during Season 1 than Comic Shane ever was.

Granted, TV Shane isn’t exactly up for any Man of the Year awards after his Season 2 activities, such as shooting Otis in the leg and trying to kill Rick. But in Season 1 he was indeed a likable guy who was simply stuck in some tough situations. He even beat some sense into Ed Peletier after Ed tried to beat his wife, Carol, in front of everyone. I think that act alone made Shane a far more sympathetic and interesting character than Comic Shane ever was.

Shane in Season 2 was easily one of the most unpredictable and volatile characters in the TV series. He was a loose cannon and did exactly what he thought he had to, even if that meant crippling Otis as a way of turning him into zombie-bait so that he himself could get away (whether he actually had to do that is a matter for another day’s discussion).

As previously stated, though, Comic Shane really never had the time that TV Shane did to develop. In the comic series, Shane only made his biggest impact after dying, giving Carl the chance to show that was ready to survive in the new post-disease emergence world, allowing Carl the opportunity to prove he could do whatever was needed to protect his family. For those who do not know, Carl kills Shane in the comic series when he confronts Rick and starts yelling and going crazy. Carl sees his dad is in danger and shoots Shane through the neck.

This hints at how Carl will eventually become an interesting and deep character, but that will be covered in the next installment of The Graveyard Shtick. Stay tuned.