The Graveyard Shtick: A grave approach to… Rick Grimes 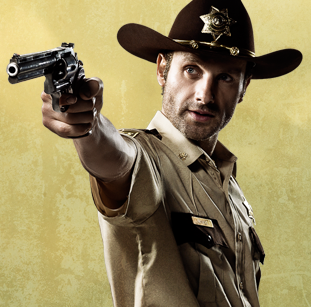 One of the main things that happens whenever people discuss “The Walking Dead” is that there is an inevitable split between people who read the comic books first and believe that they have a form of entitlement that the TV series should cater to. Then you have the other side of the fence with people who just watched the TV show and disregard what the comics have to say or are completely ignorant to the fact they even exist. This article series will try to bridge the gap between the two.

What people on both sides need to realize is that both operate in the same universe, but they are best understood as a “what could have happened” scenario. While the characters may have the same names, may look similar, and may act similar, they don’t have to. When one understands this, the series becomes much more enjoyable and everyone can cohabitate and enjoy the inevitable carnage.

So just to make both parties aware of each other’s point of view, we’ll be going through a character-by-character comparison breakdown between comic book and TV series, talking about personality traits, impactful events and even just basic appearance.

The obvious starting point would be the main character of the whole series, Rick Grimes. On the most basic level of appearance, Comic Rick and TV Rick are almost identical. Andrew Lincoln and the wardrobe department did an excellent job in recreating Comic Rick to a “t.”

From Rick wearing his sheriff outfit as often as humanly possible, to his hair sporadically growing out and getting cut and his beard growing long and then getting trimmed, the TV series does a great job. Granted the comic series has covered a much longer time period, so Rick has gone through many more hair phases than the TV series, but for where the TV series is now and where it’s headed, they are right on track with his hair and appearance.

One of the interesting differences between the comics and TV series is the way that Rick leads the group of survivors he lives with. In the comic series, the previous leader, Shane, dies off much earlier, so Rick is firmly established as the leader much sooner than in the comic series. Thus, Rick is a far more assertive character.

Since Rick has a more assertive role in the comic it effects his relationships with everyone much differently, especially Dale and Lori, and even Shane before his death. In the TV series Rick has a somewhat more peaceful and understanding relationship with Dale.

Rick’s relationship with Lori was also much different in the comic book; They had a much less volatile relationship. They didn’t spend much time arguing and often agreed on every decision. Sure, there were a few minor arguments, but typically Lori supported Rick. Meanwhile, Lori on the TV series is a almost a constant problem for Rick. But the fact Shane lives much longer in the TV series makes this much more understandable as to why the couple has so many more problems.

Finally his relationship with Shane was much different in both mediums.

Because of Shane’s early death, the relationship in the comic book never really soured while Shane was alive. Rick’s animosity toward Shane built only after his death, because that’s when he truly understood why Shane was somewhat cold and harsh to him.

Meanwhile, on the TV series, Rick found out that Shane had an affair with his wife and it all built to one of the climaxes of season 2 where Rick and Shane face off in the woods and lay their true feelings on the table. This is why I believe the TV series was superior in regards to this relationship. We get the closure of Rick and Shane’s friendship and it develops TV Rick as a much deeper character, whereas in the comics the relationship is simply used to build Carl’s character.