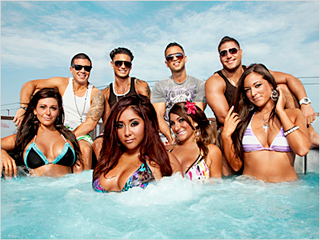 The Cultural Significance of “The Jersey Shore”

The Argument Against (by Bill Thomas)

With MTV recently announcing the cancellation of its flagship hit about juiceheads, guidettes and the joys of “smushing,” now might be the time to look back at the six-season tenure of “The Jersey Shore” and contemplate its cultural significance.

Simply put, “The Jersey Shore” is a grave marker at the burial site of cultural significance itself. It’s a snapshot of a society that’s opted to trade in self-awareness for self-insistence, a crystallization of every anti-intellect excess of the past four decades all at once. In other words, a natural evolution of the reality TV paradigm.

Never before has a group of people attained such a phenomenal plateau of celebrity by wallowing in so absolute a nadir of behavior, the sort of which could only be classified as apathetic, unsympathetic, inconsequential, indulgent and inane. “The Jersey Shore” has less in common with “The Real World” – y’know, that other iconic MTV show which this one essentially acts as a degraded parody of – and more in common with a National Geographic special about the feeding habits of fecal parasites.

Misbehaving has always ensured fame. It appeals to the rebellious spirit of America, the take-no-prisoners hedonism of youth and the energetic outsider attitude MTV once represented, before it devolved into a wasteland of teen moms, teen cribs and teen wolves.

That said, misbehavior used to be balanced out by charisma, intelligence or talent in some vocation. Ozzy Osbourne may have bitten the heads off of bats and doves, snorted ants and pissed on the Alamo, but he also put out some damn good music. Hell, if you want to look at more recent history, even Lindsay Lohan had a promising acting career once upon a time.

Sad to say, there’s not a lot of evidence to prove that mode of thought wrong these days. Sad but true, “cultural significance” may have become an obsolete notion.

The Argument For (by Sarah Mitrotz)

Human beings, particularly Americans, like to think of themselves as civilized creatures with an upstanding sense of poised morality. For most people, their day-to-day life is spent supporting this notion, painting an image that ultimately illustrates them to other humans as thoughtful, and reasonably sober, members of society.

But with every generation, with every type of culture, a reminder emerges; a reminder of the amount of pure debauchery and wild recklessness which humanity proves capable of committing. Ladies and gentlemen, MTV presents for one last season, “The Jersey Shore.”

Since its premiere in 2009, this apex – or what some would consider “low-pex” – of reality programming has given millions of viewers across the country seemingly un-paralleled scenes of utter, guilt-free indulgences into sex, alcohol and a whole lot of self-tanner, experienced by seven Italian-American twentysomethings (or, as in the Situation’s case, thirtysomethings) in Seaside Heights, New Jersey. Throughout the five seasons, catchphrases were launched, punches were thrown and Snooki’s pickles were eaten, all while parents cringed looking for someone or something to blame for such “obscene” content.

However, the only party that is to blame in the situation (no pun intended) is human nature itself. Human beings didn’t just become fame-obsessed self-indulgent party animals. Fact is, since the beginning of civilization, people, whether intellectual or ignorant, have always wanted to have some adult fun.

Take the Roman ancestors of the “Jersey Shore” cast for example. Their culture was notorious for unimaginable feats of licentiousness. How about the superfluous indulgences of Marie Antoinette and her court in 18th century France? In the 70s, Studio 54 made the antics at Karma look like an Amish prayer circle.  Even Former President Bill Clinton turned his office into his own personal “smush room,” only to deny it later on national television as if to say, “I did not have sexual relations with that grenade. Uh, I mean ‘woman.’”

Until “The Jersey Shore” and the reality-show/YouTube technology movement that spawned it, the dark, wild side of humanity was kept behind closed doors and is just now beginning to open for the world to witness and relate. To put it simply “The Jersey Shore” proves culturally significant because it shows Americans a first-time full view into the kind of ludicrous debauchery that occurs, and will continue to occur, whenever mankind is given limitless resources without immediate consequence.

Or, in other words, when given power through fame and ultimate freedom.

Most people agree that the American Dream, this country’s defining ideal, consists of money, power, freedom, and the pursuit of happiness. In the end, “The Jersey Shore” basically gave viewers an honest depiction of what that concept can look like when actually achieved.