Wilkes’ alma mater states, “May our deeds of love and service, ever swell thy fame.” Love and service are key to what Kyrah Yurko, senior neuroscience major, did this past summer with the Doctors in Italy program.

Doctors in Italy is a fellowship program that gives students the opportunity to shadow Italian doctors during the students’ summer, winter, or spring break. Yurko worked at Campus Bio-Medical University Hospital in Rome, a private university, research center and hospital. 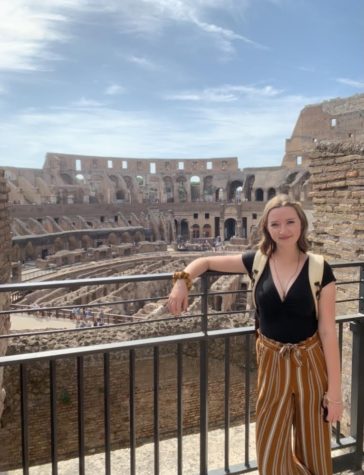 Yurko’s schedule in Italy was a good combination of work and play. Each day started at 7 a.m. with an hour-long commute to the hospital. The commute included taking a train, a bus and walking, but after an Italian breakfast, she and the other fellowship students were prepared. The work at the hospital gave Yurko and the other fellowship students a chance to observe the practicing doctors through their daily tasks.

“From 9 a.m. to 1 p.m.,  we would follow various doctors through their rounds at the hospital, often getting to watch surgeries or observe direct interactions with patients in a clinical setting,” Yurko explained. “I was able to observe an open heart surgery that the doctor was more than willing to walk all of the involved students through step by step as he performed it.”

Working in the hospital and watching procedures gave Yurko an opportunity to experience medical procedures; however, experiencing these procedures in Italy had some challenges.

“The most difficult thing about being in a different country for that long was not being able to speak the language,” she explained. “Often in the hospital there was a language barrier with doctors not being able to tell me exactly what was happening simply because they did not know how to state the words in English.”

The language barrier was the biggest challenge she had to overcome while working in Italy.

After spending the day in the hospital, students were given the chance to explore Rome and the towns surrounding it.

“I was able to visit the Colosseum, the Trevi Fountain, the Roman Forum, the leaning tower of Piza and also explore the city of Florence,” Yurko said.

Although she had traveled and experienced new customs of Italy, there were still some American traditions she was anxious to get back to, namely ice-cold drinks. Yurko explained that she was looked forward to coming back to the United States and getting a large iced drink in a drive-thru.

For Yurko, the experience working in the Italian hospital was about building her abilities, but also helped to build her resume for medical school.

“This experience gave me confidence in myself and my abilities that I did not have previously,” she said. “It made me feel as though any obstacle I encounter in the future will not be too great to overcome.”

She also pointed out that the experience was great for future career opportunities.

“This experience was also helpful to me as I believe that it will help me to stand out when I apply to medical schools and make me a better, more informed candidate for medical school selection. I believe this experience will be very beneficial to my career as it was an opportunity to closely observe medicine and the interactions between medical practitioners and their patients.”

“It was really great that Kyrah went to Rome as she could both get great international medical observation hours and also to take some time off and away from all of the research work she is performing here at Wilkes,” Harms said. “I know that she loves to go to Italy and was also excited to tell me of the surgeries she got to observe there during the same time, making it all the better.”

Dr. Linda Paul, associate professor of philosophy, spoke on Kyrah’s abilities as a student, in particular how she interacts with other students and how that will play into her career.

“I think (Kyrah) will do very well in whatever she pursues in life for a number of reasons. She is creative, hard-working, disciplined and very bright. She is sensitive to moral issues and she interacts well with people.

“I will be interested to see what she goes on to do once she leaves Wilkes University,” Paul said.

Yurko encourages any student who wants to do an international work experience to do it. She specifically recommends the Doctors in Italy program.

“To anyone who is considering doing a work study I would say go for it. If an individual was specifically interested in the medical field I would definitely suggest working with the Doctors in Italy program as it not only gave me the opportunity to observe and be part of a different culture, but also provided me with great medical shadowing experience.”

While the idea of traveling to a new country and learning through a new language is daunting, Yurko thinks it is well worth it.

“Traveling to another country alone to study is often a terrifying proposition but the rewards it presents are well worth overcoming your fears for.”

According to the Doctor’s in Italy page, the program includes,  between 40 to 90 hours of individualized (or nearly individualized) shadowing with English-speaking doctors, shadowing specialists in at least five different areas of medicine and academic credit through John Cabot University.