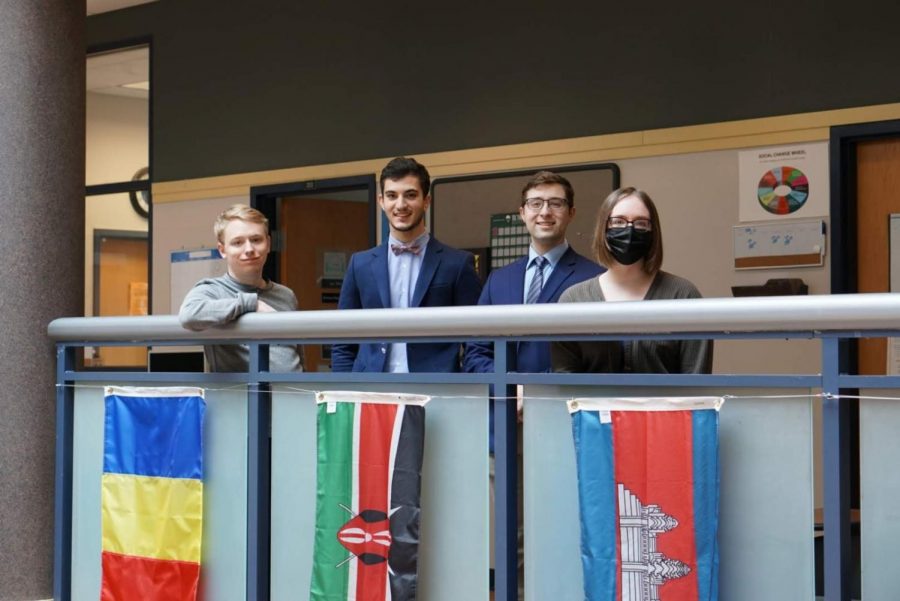 The four agenda topics included the EU relationship with the Kingdom of Saudi Arabia; relations with the Alliance of Small Island States; rebuilding the European economy through sustainable, equitable investment; and confronting and reducing the European Union knowledge deficit. These topics were negotiated by students in 11 different countries, some of which included Germany, Brazil, Malta and Canada.

The negotiations in the Model EU conference were a bit different than normal American politics. In the EU, all countries must come together and agree on a topic before it can be passed. Wilkes students had to practice effective diplomacy skills to be able to work through these negotiations to come to an agreement.

Boch, political science student who impersonated the Romanian Head of State at the conference, responded to this goal.

“Going through the simulation taught me a lot about how the EU operates,” Boch said. “Because there needs to be a complete consensus with all the delegates, it is very difficult to actually pass and approve amendments/proposals, even when they deal with uncontroversial ideas. However, in the end, through compromise and understanding, we got it done, which highlights the true meaning behind the EU.”

Practicing happened for months prior to the conference and required a large amount of free time from the students and Dr. Andreea Maierean, the adviser to the students and assistant professor of political science at Wilkes.

Maierean explained that both she and students did this as a complete voluntary effort.

“The students didn’t do this for a grade, didn’t do it for anything school-related – it’s an extracurricular activity they participated in, and it requires substantial efforts,” Maierean said. “We’ve been meeting since January, and it’s like they did take an extra class with no credits.”

The knowledge gained from this conference was particularly valuable to students who plan to eventually work in Europe. This was the case for Astegiano, a political science and international relations major.

“Having the opportunity to participate at this year’s Global Model EU event is yet another one of those amazing opportunities that Wilkes has provided me with,” Astegiano said. “This international event gathered institutions, faculty and students from all over the world and brought them together to debate the EU’s most pressing issues.

“Heading to graduate school in Europe after graduation, this event has prepared me and given me real-life experience on the workings of the European Union and international institutions in general. Small school attention with big school opportunities has never been more true at Wilkes University.”

It was not just students who did work for the conference though, as the student advisers from all the different participating universities worked together before and during the conference to organize the event to ensure students could enjoy it as best they could. While COVID-19 provided a slightly more unusual planning method, the work of advisers is what brought the conference together.

The success of the conference, as a result of the advisers’ planning and the students’ efforts, ended up paying off for Boch. On the last day of the conference, during the Closing Ceremony, she won the award “Most Likely to Be a Diplomat.”

Maierean reflected on the outcomes of the conference and how this conference impacted students.

“We try a lot in our department to broaden the horizons of our students and to make our students a bit more aware of what happens overseas in other parts of the world, and I think that’s a great way for us to become better global citizens and understand that there is much more to the world than what we see in Northeast PA or in the U.S. in general,” said Maierean. “And the better we will understand the dynamics in international relations and world politics, the better we will be as human beings.”