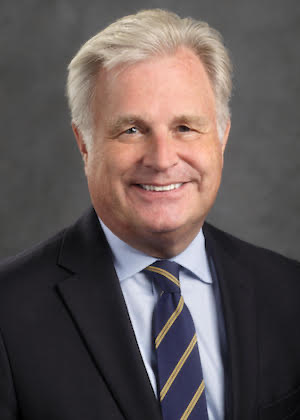 In the spring of 2019, then vice president of student affairs Dr. Paul S. Adams was appointed to the position of interim president at Wilkes University. A year later, Adams led Wilkes through the appearance of the coronavirus pandemic in March of the 2020 school year.

In May, Dr. Greg Cant officially took his role as president of the University, and Adams returned to his position as vice president of student affairs. With Cant stepping into his presidential role sooner than expected, there was little time to reflect on Adams’ time as the interim president.

Dan Cardell ‘79, a member of the Wilkes Board of Trustees, praised Adams in a May 24 leadership update.

“I want to take this opportunity to thank Paul for his incredible service to Wilkes over the past year,” shared Cardell. “I have known Paul since we were undergraduate students at Wilkes and, more than 40 years later, I had the great honor of participating in Paul’s installation as interim president. In my remarks, I expressed that Paul was the best person to lead Wilkes during this period of transition. He has certainly delivered.”

“It was a whole range of emotions,” said Adams. “You think, am I up for it, and can I serve the university the way it needs to be served? You think, this place is so important to me, and I would never want to do anything that would bring it any harm. That was part of the conversation in my head, but people were very kind and expressed a lot of confidence in me.

“You know that there are so many unanticipated things that come when you are president, and they run through your mind. Those were all the things that kind of went through my head – there are a million thoughts that go through your head.”

Since he was 24 years old, Adams has worked at Wilkes University, allowing him the opportunity to work with six out of the seven campus presidents.

“I have had the blessing of great relationships with all of them. You learn from each one of them – you watch where they were successful and where they were challenged, and you hopefully absorb a lot over the years and understand it in the context of Wilkes.”

Although Adams learned from his predecessors, one challenge he could not prepare for was a global pandemic.

Adams revealed that the pandemic changed by the hour, and that he now realizes many of the goals set changed rapidly and required quick adaptation to guidelines from health experts in the nation.

“Throughout everything, we had a number of goals that we set – first and foremost was to keep everyone safe,” said Adams. “These were the things that I think guided all of our decision making: how do we keep people safe, how do we respond to the urgent needs of the people on campus and what could we do to ameliorate their situation? Third, how do we create the best product that we could deliver to our students, and how do we assure the future viability of the university?”

Adams described the decision-making process as incremental, moving from the plan to have students return to campus in April to keeping students home. Commencement and summer school had to be cancelled due to the virus, forcing Adams and his staff to adapt constantly – something he says has not changed not yet.

“Paul led the University during one of the most challenging years we have experienced in our history. And, he did so with honesty, compassion and with a commitment to students that has defined his career,” shared Cardell in his leadership update.

“The first things for the year were to keep the trains running and make sure the university functioned as effectively as it could. The second was to complete the strategic plan because this was its last year. The third was to get us through the middle states self-study, which we seemed to have done pretty successfully, and the fourth thing was to get the campus ready to select and welcome a new president, which I think we have managed to do pretty darn well, too.”

Adams is going to continue his work on campus as the vice president of student affairs, which means he will work alongside newly-appointed Cant.

“I have been blessed by an incredible team,” said Cant. “Paul Adams is a good example. Paul has just a modest experience with Wilkes – I think it is maybe 40 years. If Paul doesn’t know you, you are probably not here. It is a part of his immense sort of mental library he has.”

Despite having to face the pandemic and budgetary problems, Adams still looks back fondly on the past year.

“In terms of wonderful moments for me, nothing will surpass the two commencements that I got presided over and to be able to present a diploma on behalf of all my colleagues to a graduating student. That is the pinnacle of my career to be able to do that,” shared Adams. “I tease about this, but I will take credit as being president and being undefeated in the Mayor’s Cup with King’s.”

Bridget Giunta, executive assistant/director for the president’s office; Dr. Donald Mencer, the head of the faculty affairs council; Jeanne Rabel, the chair of the university staff advisory board; and Cardell were among those Adams wished to acknowledge for all of their hard work during his time as interim president, as well as all of his other colleagues.

“I would be so remiss to not give all the credit I need to give to my wife Jean, who bore the brunt of this more than anybody,” said Adams. “She was the one, who when I came home at night feeling challenged, she was the one who had to live with those emotions and challenges throughout the year. I couldn’t have done it without her. She is my partner and she is my rock.”