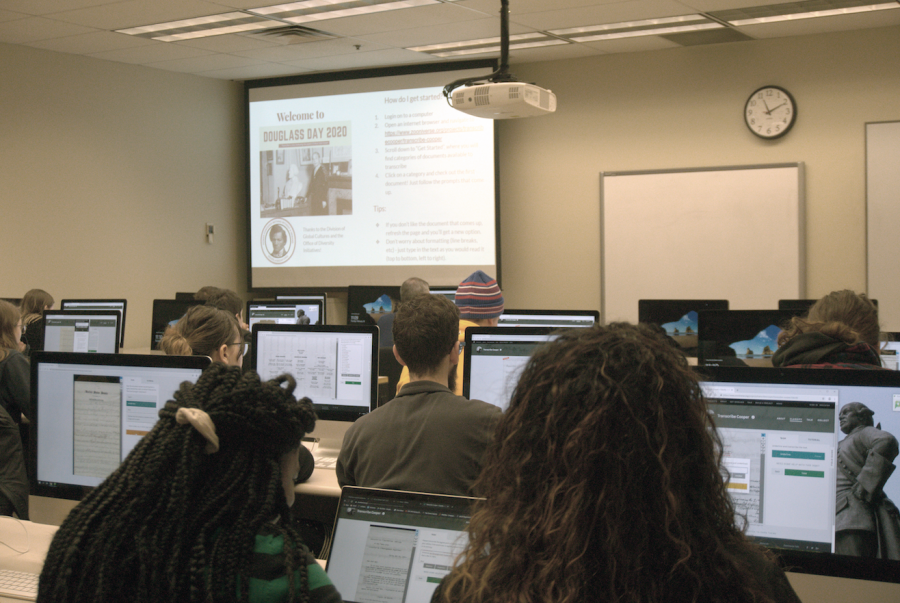 The Anna Julia Cooper Transcribe-a-Thon had over 30 participants from faculty, staff and students.

On Tuesday, Feb. 18 during club hours, the Division of Global Cultures and the Office of Diversity Initiatives co-sponsored their first-ever Frederick Douglass Day transcribe-a-thon in honor of Black History Month.

Over 30 students, faculty and staff participated in digitizing and transcribing the papers of black educator and feminist Anna Julia Cooper. The transcriptions are part of a much wider crowdsourcing project and ultimately Cooper’s papers will be made available online.

The event was beginner-friendly, and there was no prior transcribing experience needed in order to participate. All of the transcribing was done through a website called Transcribe Cooper, and it allowed participants to choose a category of documents that they wanted to transcribe. Works that were digitized included academic papers, financial records and diary entries.

It would pull up a scan of a document; some were handwritten and others were typewritten. The transcriber would be asked a couple of questions and then given a box, where they were asked to transcribe the writing that was in the document.

Some of the documents were not OCR-readable (optical character recognition), which meant that although the documents were available by scans, the text was not searchable. Each document is transcribed by at least three different people, with the idea that if someone mistypes something, no one person would “ruin the project.” In addition, this was used to help triangulate what was written in a handwritten document.

Eventually, the Anna Julia Cooper Digital Project will merge these transcriptions and make them available online.

Cooper is considered the “mother of black feminism” and was a prominent scholar and civil rights activist. She was born a slave and later became the fourth African American woman to earn a doctoral degree, and the first woman to receive one in Washington D.C. Her most-known work was A Voice from the South by a Black Woman of the South, which is widely considered a seminal text in feminist thought.

Published in 1892, its collection of essays and speeches was described by literary scholar Mary Helen Washington as an “unparalleled articulation of black feminist thought” and by fellow scholar Beverley Guy-Sheftall as the first book-length black feminist text.

Cooper lived to 104, passing away in 1964. Realizing that her life overlapped with some people’s grandparents allowed students to see Cooper in context and realize that it was not that long ago that she was fighting for rights.

There were a total of 2,800 people across the country participating in the Douglass Day Transcribe-a-Thon, and 58 groups were based out of academic institutions. As of Sunday, according to the Transcribe Cooper website, 90 percent of her work was digitized by 426 volunteers.

Dr. Amy Sopcak-Joseph, assistant professor of history, was the organizer for the event.

“This was my first event that I put together here. It was difficult to know how people would respond. Would anyone show up? And it was really great, we had a nice turnout. We had about 25 people who signed in but there were more people that stopped by. A couple of global cultures professors offered this as extra credit but a number of faculty were also there participating. Even Dean Riggs was there participating,” she said.

This Transcribe-a-Thon was the latest in a collaboration between the Penn State University Library, Howard University and the Colored Conventions Project to digitize the works of influential African-Americans to mark Douglass Day. Although he never knew his birthday, Douglass customarily celebrated it on Feb. 14.

“Douglass Day was a precursor to what is now Black History Month, and these projects have been trying to revive [Douglass Day]. This is the third or fourth Douglass Day where this group has sponsored a Transcribe-a-Thon of someone’s documents,” said Sopcak-Joseph. “My sense is every year they’re trying to make available the papers of an important African-American whose materials are not accessible to the public yet.”

The Office of Diversity Initiatives helped market the event, and the Multicultural Student Coalition gave financial support by providing an assortment of cookies, fruit and water at a snack table during the event.

“I don’t tell students to do something if I’m not willing to do it myself. I was transcribing a financial record myself so they could see that we could do this together,” said Erica Acosta, associate director of the office of diversity initiatives. “And what a beautiful way to digitize stories and information of unsung heroes that we might not know about, but can offer it to the future. Hopefully, people in the future can read from doing research, getting to know her a little bit more.”

Acosta said she would be open to doing more collaborations in the future and would like to see it happen more often on campus.

“I love collaborations like this because if we could have more interdisciplinary collaboration, I think it reinforces how diversity is embedded in most of our academic curriculum,” she said.

The celebration of Douglass Day will continue throughout March, and people who missed the official Transcribe-a-Thon can still transcribe Cooper’s works.

“I transcribed my fingers to the bone,” said Dr. Paul Riggs, dean of the College of Arts, Humanities & Social Sciences. “It was an important part of the celebration of African-American History Month.”