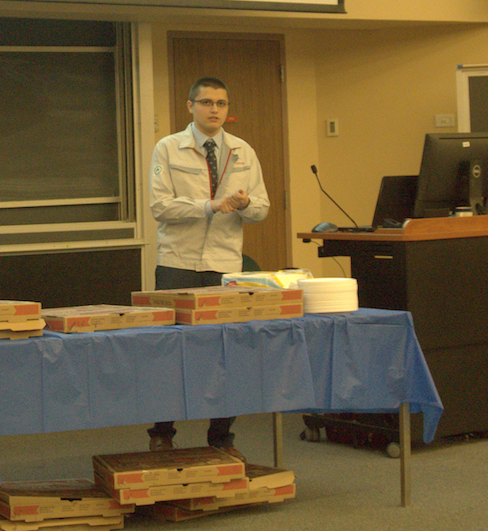 Davis spoke about what he does at his job, which is optimizing vehicle designs through crashes and simulation tests.

The Wilkes student chapter of the American Society of Mechanical Engineers (ASME) held a guest lecture to celebrate National Engineers Week. Adam Davis, 2018 alumni, returned to Wilkes and gave a lecture spanning what he does at his job to how students can prepare to get jobs in the mechanical engineering field.

After a bit of a late start, as Davis caught up with friends and teachers, he began by introducing himself as a Wilkes mechanical engineering graduate and thanking the students for coming out during such a busy part of the semester.

Davis began by explaining his job, “I work at Toyota in Saline, Michigan. We are a North American Engineering Center that specializes in optimizing vehicle designs for the North American market.”

His job at the center is to crash cars, do component tests and perform simulation crashes to see how cars hold up to different impacts. Davis gave a glimpse into the future of technology of crash testing saying that by 2040 or 2050 “we might not have any physical tests at all” because the crash simulations that companies are using are so good.

By showing videos of a Chevy Belair crashing into a Chevy Malibu, he drove home the point of how much crash safety has improved. Davis explained different regulations that had to be met for safety, and while some people talk down about regulations and rating systems he said, “They push us to make safer cars and they can help people to make better decisions in terms of what they buy. So, it’s not all bad, it’s a good thing.”

Davis explained some nuances of his job saying it takes one to three weeks to put the crash cars together, as hundreds of accelerometers, pressure sensors and strain gauges have to be placed around and inside the car to collect data. The mention of strain gauges brought some groans from students in the audience and Davis understood their lack of enthusiasm, which brought laughs from the professors.

While Davis understood their frustration with certain classes, he also acknowledged how these classes at Wilkes had prepared him for the job he had. He credited hands-on experience and access to high-achieving people like professors as reasons why he did so well. The experience he had at Wilkes also made him a good competitor in the job market, “I was able to go toe-to-toe with people from big schools like Michigan State and U of M.”

It wasn’t just the classes that prepared him though, the career development center was pivotal to his learning.

“I learned a lot from Sharon Costano and she was very helpful in helping me look for opportunities and helping me with resume building and interview practice,” he said.

Davis then set a scene some of the seniors may be experiencing soon, “Your parents are probably asking ‘so what are you going to do? Are you going to live in my house for the rest of your life?’”

While moving out is a concern for parents, he motivated students to have goals bigger than just that, “It’s good to have a goal, I know the basic principle is I want to have a job so I don’t starve to death, but you should have a goal bigger than that.”

He also gave plenty of advice to students and teachers on how the job market is and how to be better prepared for jobs. He reminded students it is okay to move away for a bit to get experience then come back to work in the plant in your hometown.

Davis talked about his own personal rejection saying that he had been rejected from 200-300 places before he got his job and felt the nerves of graduating students, “Seniors I’ve been where you are, so keep at it.”

After the lecture, Andrew Vaupel, a mechanical engineering student expressed the usefulness of the topics Davis talked about, “It addressed a lot of concerns about getting a job and gave a lot of useful strategies.”