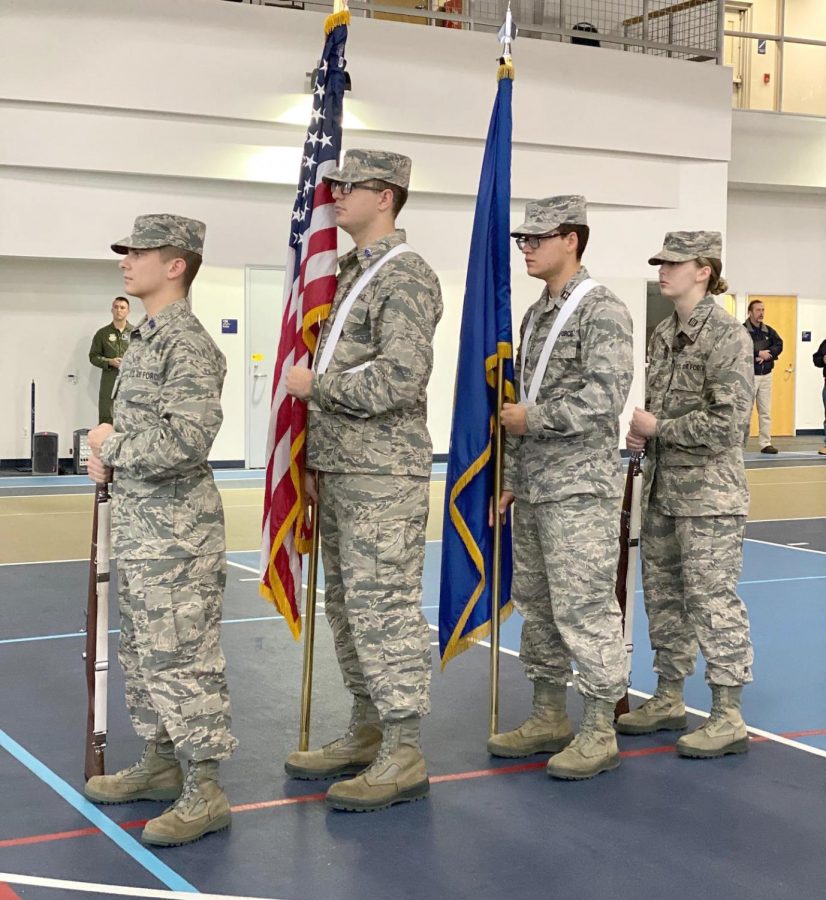 Gratitude for the service of everyday Americans. That was the overarching theme of this year’s university Veteran’s Day Ceremony.

“Today we honor our veterans, worthy women and men who gave their best when called upon to serve and protect the country, these women and these men who serve and protect the country come from all walks of life. They are parents, children, grandparents, friends, neighbors and coworkers. And they are an important part of their communities,” said Father John Ryan, King’s President and Wilkes University alumnus.

These remarks set the tone for the ceremony.

“Today we honor all the veterans both past and present who unselfishly placed their lives on the line for those very freedoms,” said JD Reeves, a student veteran at Wilkes. “Those men and women who were just ordinary people until they heard the call of duty and answered.

“They left their families, their homes and their lives,” he continued. “They did this not for recognition or fame or even honor, the honor that we bestow on them today. They fought to protect our country and maintain our way of life.”

The humility Reeves talked about was evident in the ceremony.

Angela Fiorentino described the ceremony as “short, yet meaningful.” Fiorentino, who spoke from a student’s perspective, said that to her, Veterans Day was remembering the service of military personnel “who have left their families and homes to and protect the freedoms belonging to millions of people they don’t even know, many losing their lives in the process.”

Lt. Colonel Mark Kaster, the Wilkes University Veterans adviser and co-adviser of The Wilkes Veterans Council, acknowledged the difficulties veterans face both while overseas and once they arrive back at home. He explained how coming back home can be a struggle for many veterans and the importance of Wilkes in their journey back to civilian life.

“I call Wilkes a landing zone for vets coming off active duty. They could get recalibrated and accustomed to civilian life and education,” Kaster said.

University President Paul Adams acknowledged and thanked the many people and groups throughout campus that help student veterans acclimate to school.

He pointed out the Wilkes’ Veterans Council and Wilkes’ participation in the Yellow Ribbon Program in which Wilkes contributes 50 percent of educational expenses with a match from the veteran’s administration. In particular, he thanked Kaster for his service to the students on campus, as well as the Veterans Council and Veterans Center.

Adams also acknowledged the Veterans Memorial Circle installed last D-Day at the center of campus, which he explained, “provides us an opportunity each and every day to reflect on the sacrifices made by all  Wilkes’ Veterans Council’s service to veterans has not gone unnoticed. For the ninth year in a row, Wilkes has been named a military-friendly school and the effort members of the Wilkes community makes has not gone unnoticed by potential students.

Reeves noted the commitment Wilkes has to its veterans as one of the reasons he was drawn to continue his education here.

He said, “I applied here at Wilkes because of the effort they put in for their veterans.”

Reeves’ final point was that the people of America also have a duty to protect the rights veterans have fought for.

“You can maintain our freedoms by simply maintaining it here in America. If you want to preserve our freedoms, we must put it into action. For example, by voting in our elections, also by speaking out against injustices. We must also ensure that everyone feels the benefits of our freedom.”