Thirty years since fall of the Berlin Wall 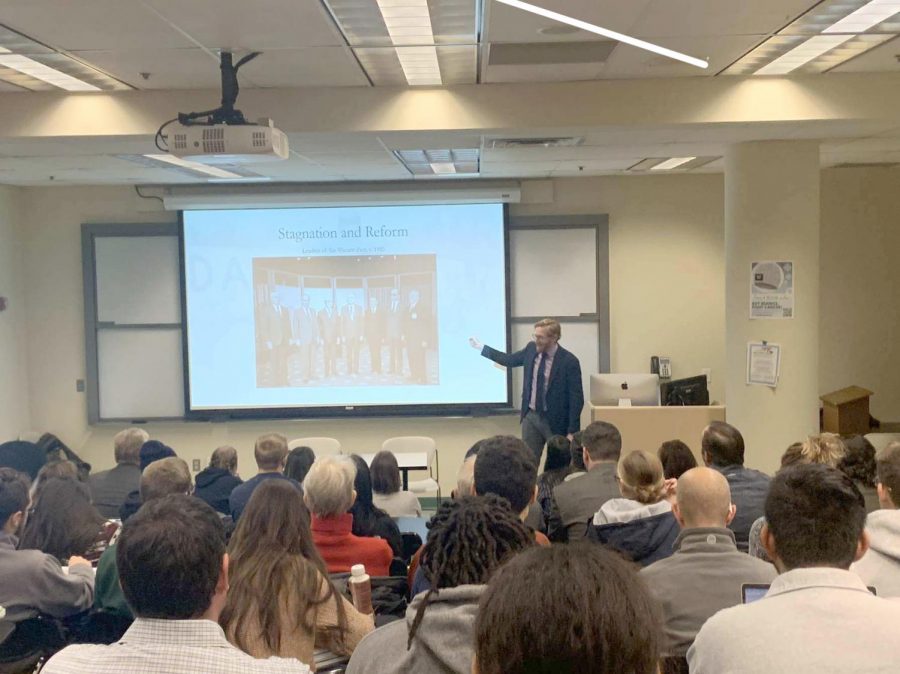 The lecture encompassed not only the fall of the Berlin Wall but also the situations leading up to it and other revolutions which overthrew communism in countries across eastern Europe.

Kuiken began the lecture with an introduction to the structural causes that led to multiple revolutions. He explained the difference in how the events were viewed then and how they are viewed today.

“Now that we’re looking back 30 years after this, the revolutions of 1989 seem a little bit inevitable, as most historical events tend to do when you look back on them, but these revolutions were shocking in 1989. If you asked historians or political scientists, politicians or anyone in 1989, ‘Will communism collapse in the next year?’ I’d say that probably 99 out of 100 would have said no,” he said.

To explain the situations that lead up to the communist revolution, Kuiken discussed the political climate of post-World War II Europe up to the fall of the Berlin Wall.

Eastern Europe supported the local communist governments and the Soviet Union coming in and taking power because they believed these governments would help them rebuild a better life for themselves and their children. Kuiken described this as the Great Lie.

“These governments said that if you give up your civil liberties, we will guarantee you economic prosperity and a better quality of life,” he said.

This release of civil liberties led to multiple uprisings, such as ones by Hungary in 1956 and the Prague Spring in 1968. These revolutions were suppressed by the Soviet Union.

“These revolutions or these uprisings are led by young people because they are the people who have idealistic hope for the future.”

Kuiken’s explanation leads into Maierean’s discussion of specific revolutions, particularly the Romanian revolution she witnessed as a child. Throughout her half of the lecture, she reiterated the point that students were at the forefront of these revolutions.

“The 1980s were really the harshest historical period that Romania has seen recently, and it’s also the decade of my childhood.”

She described memories of walking into grocery stores to see nothing on the shelves and only having one television station and two radio stations, all only showing government propaganda. Maierean also explained that the situation in Romania was full of fear and distrust.

“Everyone was under strict supervision like in a Big Brother type of society. There were microphones in people’s houses, friends were spying on each other, people were encouraged to tell on each other. The secret police created this fear and distrust. And although communism collapsed in 1989, this distrust is still there today.”

With all this distrust and fear among citizens, it’s hard to imagine that anyone would speak out enough to find someone else to build a revolution with, however, Maierean pointed out that “undergraduate students were at the heart of this revolution.”

The fall of communism in Romania culminated in one event in which the leader, Nicolae Ceausescu tried to hold a public speech, but lost control of the crowd. This sparked a street revolt that overthrew the government.

“More than 1000 people died and most of them, the people who stayed on the streets for days and days, were the young students from the University of Bucharest. They were at the forefront of change.”

“I didn’t know a lot of things they talked about prior to coming into this lecture, I thought it was really interesting.”