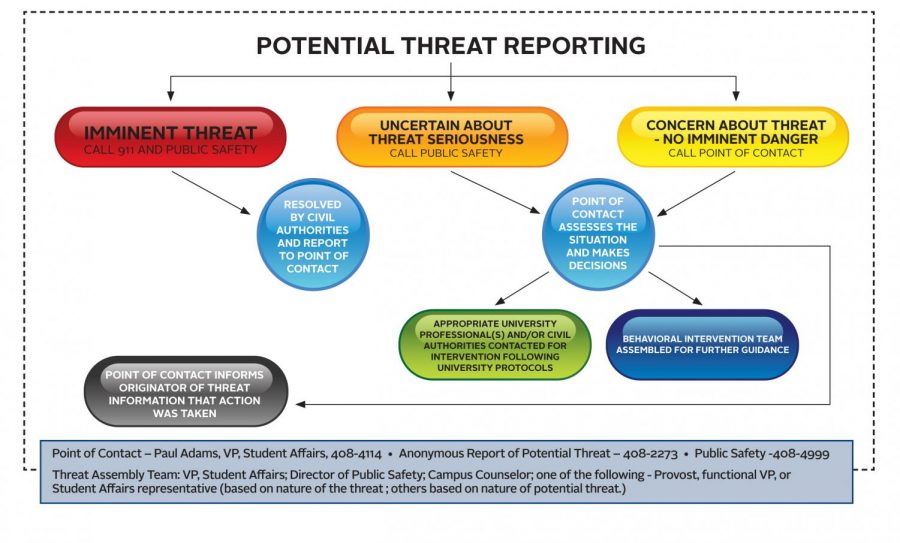 From the 2019 Annual Security and Fire Safety Report

On Oct. 27, between the hours of 8 and 9 p.m. multiple incidents of student harassment were reported on campus in areas including University Towers, the Dorothy Dickson Darte Center and the E.S. Farley Library.

“All these incidents that you either read about or heard about stem from an incident that occurred in front of the Asian Kitchen at South Main Street. A male made a derogatory slur to someone that was walking down South Main Street,” said University Police Lieutenant Michael Krzywicki. “All parties are unaffiliated with Wilkes. The other guy took offense to it, came back to him and knocked one of his teeth out.”

During this time a trick-or-treat event was hosted at the McHale Athletic Center. Campus police at the gateway witnessed the altercation and contacted the Wilkes-Barre Police Department. City police cited both parties for a mutual fight and sent them on their way. One of the parties would later return to campus seeking retaliation, assuming the other party was a Wilkes student.

Both suspects were identified the next day on Monday, Oct. 28 at approximately 3 p.m. in front of Starbucks after harassing a student at the Student Union Building. Both were identified and detained by Wilkes-Barre police.

“So basically, there were four incidents on campus by the same individuals. These occurrences are actually very rare,” said Krzywicki.

WUPD urges students to report suspicious activity that occurs around campus. They can be reached either in their office on 148 South Main St. or over the phone at their emergency number, 570-408-4999.

“When we have incidents like this and especially when someone claims a weapon is brandished, we have an obligation to put out an alert to all students,” said Krzywicki.

Matthew Adler, junior corporate finance and accounting double major, said, “That’s part of the reason I think myself and a lot of people I know don’t go out late at night anymore, especially alone because you don’t want anything to happen to you. I don’t blame Public Safety, I mean people are walking around and things just happen.”

Being a fully-sworn police force, WUPD has the same arrest powers and certifications under Act 120 as any other Pennsylvania police department. Their jurisdiction spans all Wilkes University property and anything contingent, although in those cases they often defer to city police. Both departments have an amicable working relationship.

“Even though we can handle an accident that happens on South Main St, right now Wilkes-Barre still wants to handle that because it’s their property. We could handle it if they requested it of us,” said Krzywicki.

He urges students and faculty/staff to report suspicious activity and be mindful of their surroundings. Especially at night, he said it is important to stay in well-lit areas and walk-in groups if possible.

“Trust your instincts. If you think something’s not the norm, it’s probably not. So immediately call 911 or call us to come and investigate it. Think safe.” added Krzywicki.

“We’re considered our own little community here at Wilkes. Everybody that has an association here, all of our students and faculty/staff, are our eyes and ears. Let’s say you notice something is missing in your kitchen. I’m not going to know that, but you will,” he added.

“Regardless of your gender someone can shoot you or assault you with a knife, duh. But it comes to more of a sexual standpoint where you’re a girl and you have to be even more aware. The fact that it happens right where I go to school all the time almost every day, it’s terrifying,” she said.

There was an additional incident of an armed robbery of a Wilkes student that occurred in the Genetti’s parking lot on Wednesday, Oct. 30 at around 9:30 p.m. It is currently a pending investigation by Wilkes-Barre police. During publication, WUPD was not at liberty to discuss it at-length outside of the Wilkes alert.

The university also experienced one offense of robbery in 2018 and zero in both 2017 and 2016. It was classified as a strong arm (hands, feet, etc).