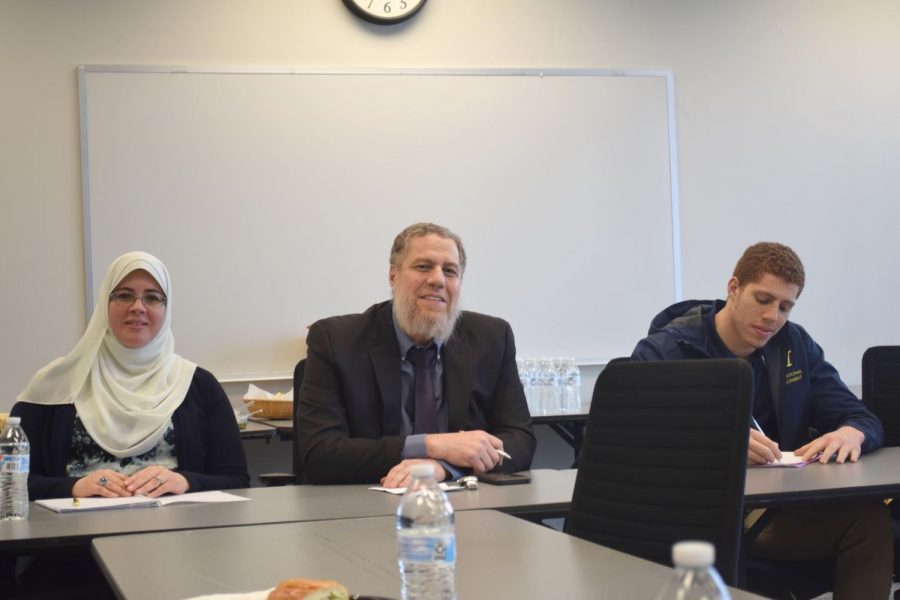 The event, which was held in the Miller Room of the Henry Student Center, was hosted by the Almeky family including Dr. Essam Almeky, his wife Dr. Azza Almeky, and their sons Mustafa and Abdul.

The event started with Dr. Essam Almeky asking the audience to talk about what they know about Islam.

Most of the audience knew minimally about the topic. Monotheism, the Quran, the Arabic language, media portrayal of Islam and the pillars of faith were all brought up by the audience.

Dr. Evene Estwick offered her knowledge on the topic by speaking about the religion’s widespread reach.

“I know it’s one of the widest practiced religion in the world, and like Christianity, there are many different types of the religion,” she said. “I also know there is an emphasis on family and helping one another.”

Kristin Osipower, the campus interfaith coordinator, spoke about the images that come to mind upon hearing the word “Islam.”

“I think of images of the mosque, how the women dress, and how the religion is, justly and unjustly sometimes, intertwined with politics and culture.”

Dr. Essam Almeky addressed the stereotypes and misconceptions that belong to Islam. He began by explaining the basics of Islam.

“The meaning of Islam is submission and surrender to the will of God,” he explained. “You reach peace by submitting and surrendering yourself to God.”

Articles of worship include dress and acts of ritual, while articles of faith are a person’s inner true feelings and beliefs.

Muslims believe in one all powerful God, explained Almeky.

“That God, in the arabic language, we call Allah,” he explained. “But if you ask a Christian (arabic-speaking) person about God, they will say Allah too. The words are exactly the same.”

According to Almeky, God has sent messengers to mankind starting with Adam from Adam and Eve and ending with the prophet Muhammad. God also sent books to guide the followers of Islam.

“We are here for a testing period,” he said. “What happens in college? They assign a professor to you and give you a book. There is always a teacher and there is always a book, and a day of judgment where you will be tested on what you achieved. God is testing us with everything that we go through in our life.”

Essam Almeky also spoke about the concept of destiny in Islam, relating the concept to the idea of someone choosing to drop or hang on tight to a glass cup.

“Muslims believe in destiny because God knows everything,” he continued. “He knows what’s in the heart, but he does not force you to sin.”

The family then began to describe the action of praying to God.

Abdul Almeky, son of Essam Almeky as well a Wilkes student, performed the traditional prayer to God for the audience.

Dr. Essam Almeky, described how Islam is a way of life.

The lecture series will continue next month with a lunch-provided information session on another religion.