The character -- named "Bovis" -- has been appearing throughout campus 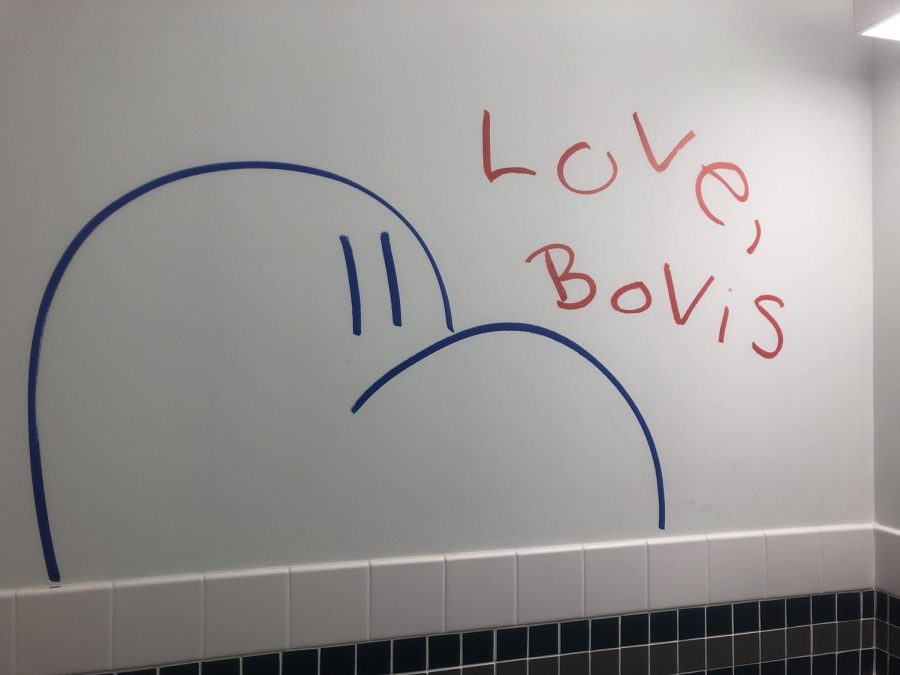 WILKES-BARRE — The search is on after graffiti has appeared on campus buildings over the last few weeks. A cartoon-ish figure with a blank expression has been painted on walls, doors and other surfaces throughout campus.

Wilkes University Public Safety Chief Chris Jagoe sent an email advisory out to the campus community earlier today advising students to be on the lookout and asking for their help.

The vandalism has resulted in time-consuming and costly repairs. To date, the cost of those repairs has exceeded $10,000, categorizing the vandalism as a third degree felony offense — punishable with jail, fine and restitution.

Jagoe said the university will pursue criminal charges related to these acts. An undisclosed reward has been offered.

“It is unfortunate that someone finds a sense of accomplishment and pleasure in damaging campus buildings,” Jagoe said. “The University has invested so much and worked hard to make the campus inviting and vibrant. The result of such criminal conduct impacts our campus both physically and psychologically.

“Not only is it expensive to repair, but vandalism such as this encourages others to emulate such acts and creates an environment which makes people feel less safe in their own buildings.”

The drawing depicts a small cartoon-ish head with a seemingly blank expression. There have been different variations of the character with crosses for eyes. It would appear the cartoon character is taking the name Bovis after the name was painted alongside the character figure.

Jagoe pointed to a definition of bovis. According to Urban Dictionary, bovis is a “term used to describe an event or situation that is awkward, inconvenient or generally irritating.”

King’s College also reported similar vandalism.  Jagoe said the Department of Public Safety is working with them “to review camera footage and other technological means” to identify individuals involved.

“I can only hope someone comes forward with information to help us identify and prosecute anyone involved in these senseless acts,” Jagoe said. “I’m confident someone has seen or heard something of value which will bring this behavior to an end.”