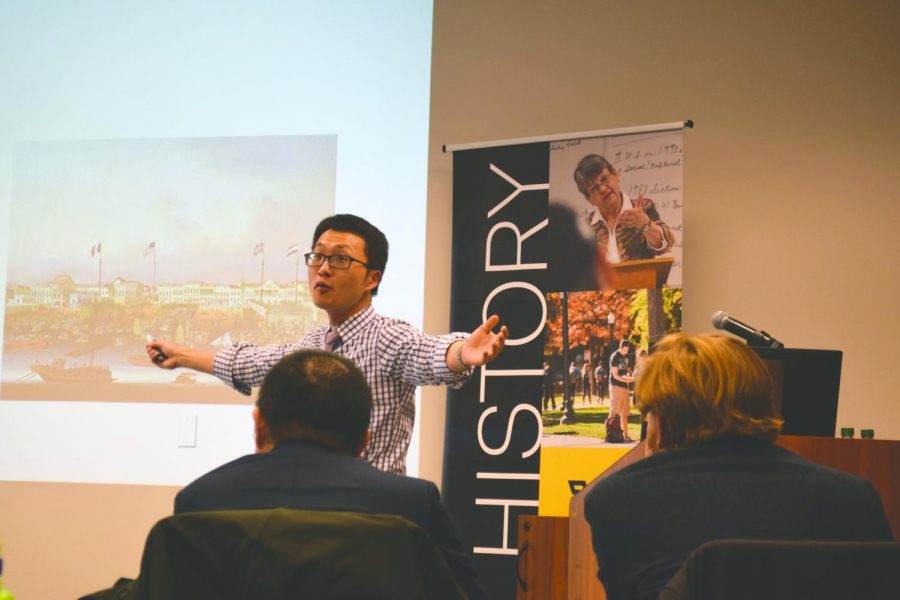 Dr. Akira Shimizu and Dr. Jonathan Kuiken of the History Department welcomed their colleague Dr. Yanqiu Zheng from Misericordia University on Thursday, Oct. 23 as a part of the Division of  Global Cultures’ Contemporary History Project.

Zheng talked about the global trade war between the United States of America and his home country, China.

He started with Vice President Mike Pence’s quotation about the history of the United States and China’s longstanding relationship to why the trade war has been instated.

He split the lecture up into two parts: the first about trade, the second about war.

Trade started when the US began to crave Chinese products and started to import them, like tea and porcelain, however, Zheng noted that you don’t see this desperation in Pence’s words.

He then talked about the hidden destruction of opium that destroyed China, which Pence never mentioned.

“Mike Pence is giving you a particular version between the two countries, but if we look at it from the Chinese perspective we can better understand it,” said Zheng.

Zheng moved to the second part of the speech, focusing on the conflict between the two countries.

He talked about the abuse of power from the United States and how it not only caused suspicion of the Chinese but how it allowed us to be fearful of them.

The U.S. has been afraid of China because of its communist ties, which we use as an excuse to enact a trade war on them.

He referred to when Trump said Chinese students are spies from their government, which have caused these recent and past trade tensions.

“China and the United States have very different ideologies… I really think this is what distinguishes our current time from the previous times,” said Zheng.

Sophomore international studies, history and political science triple-major Juan Astegiano attended the lecture among many other faculty and students across the campus.

“It is very important in order to formulate an opinion, to have studied and understood both sides of a relationship and the different perspectives and I believe this lecture accomplished that exact goal,” he added.

Kuiken also commented on the lecture and the Contemporary History Project as a whole.

“The Chinese trade war was an obvious example of something that needed some historical context to it,” said Kuiken.

“We thought it was a great opportunity to get some good historical perspective and also to build some bridges between our two institutions.

Dr. John Hepp, from global cultures on campus, is the next speaker for the project where he will be talking about the 100th anniversary of the Versailles Peace Conference which ended the first World War.

This lecture is scheduled to happen in the Spring 2019 semester.