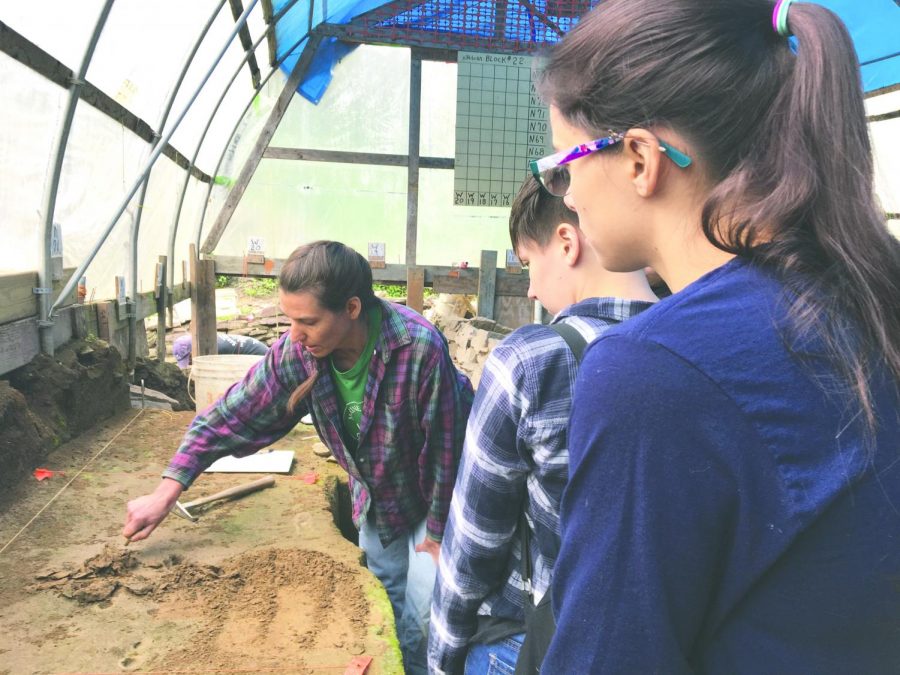 Eileen Blaine and Cece Hornbaker look to learn the methodology of excavation.

At the end of September, visiting anthropology professor Alison Oskam took her introduction to archaeology and world prehistory class to a local archaeological dig site.

Alongside Oskam were anthropology professor Dr. Linda Winkler and two archaeologist colleagues who assist the students at the site.

The field trip took them to the Conrail-Pittston archaeological site in Pittston, Pa., 15 minutes north of the Wilkes campus.

This archaeological site has been excavated by the Frances Dorrance chapter of the Society for Pennsylvania Archaeology for the past 20 years.

The students participated in the ongoing excavation of the dig site, recorded their work and they were able to learn basic artist identification that is used among archaeologists.

They were all split up into two teams and dug and documented for three hours.

Oskam decided to hold the field trip at a site close to campus because she wanted to show that archaeology is everywhere.

“Most people think you have to go to Egypt or Mexico or somewhere else to do archaeology when there are hundreds of archaeologists working right here in Pennsylvania every year,” said Oskam.

The students were also able to understand the methodology of archaeology from a firsthand perspective in contrast to the online nature of the course.

“I wanted the students to see how a site was set up and have a chance to do some field work,” said Oskam.

Sophomore history and political science major Chris Smith was one of the students who went on the field trip with the class.

“The first-hand experience of excavating that I would have never otherwise got,” said Smith. “There is also an extreme difference between reading about archaeology and actually doing it in real life.”

MacKenzie Egan, a senior english and history double major, also attended the trip to the excavation site with her archaeology class.

“We kind of got to put to practice all of the stuff we have been applying mentally,” said Egan.

“It kind of grounded the idea that archaeology is still such a growing field and it’s not really dying out,” she added.

The students were able to find and take home some of the small ancient artifacts that they had found during their dig.

Smith found an ancient arrowhead from approximately 2,000 BC.

“It is an amazing feeling to be holding something so old and so ancient in the palm of my hand,” said Smith.