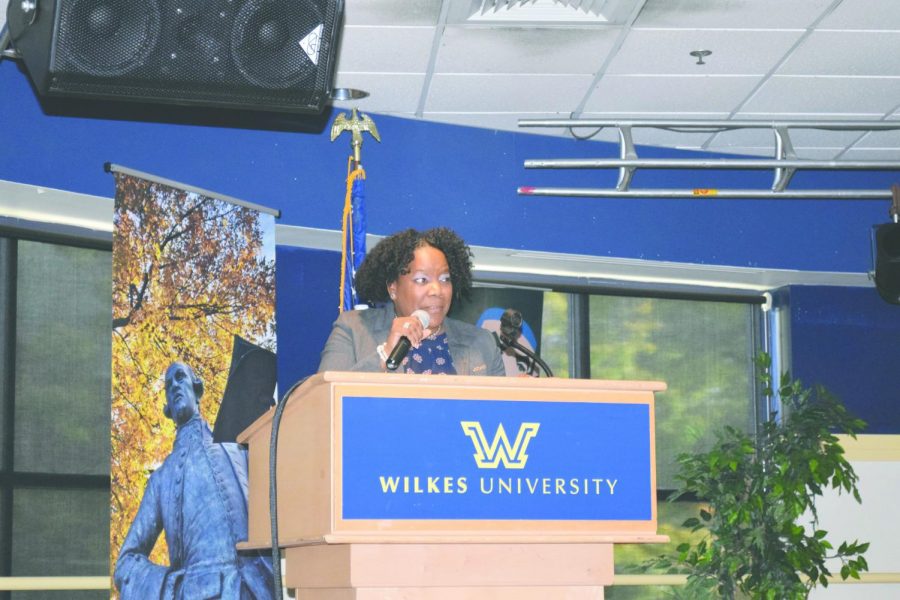 Dr. Vicki Sapp, the keynote speaker, spoke about how she overcame her own unconscious bias.

Dr. Vikki Sapp, a member of Geisinger Commonwealth School of Medicine, was the keynote speaker at the conference. Sapp used her story of perseverance, hard work and success to show how we can overcome our unconscious bias against ourselves and others.

Sapp defined unconscious bias as, “The attitudes or stereotypes that affect our understanding, our actions and decisions in an unconscious manner.”

Sapp began by making her way to the stage to Drake’s “Started From the Bottom” as a way to showcase how far she had to go to move past the unconscious bias of teachers and faculty, who, despite Sapp being in the top 10th percentile of her class, never informed her of about going to college. Sapp was raised in a poverty-stricken neighborhood in South Bronx, despite the odds against her Sapp continued on to attain her Ph.D. as well as many other accomplishments.

“When you look at my bio, when they read the little comments, the highlights, that’s glamour. I struggled, I battled, I had imposter syndrome, I had stereotype threat, I had racial battle fatigue throughout my undergraduate experience,” said Sapp.

Sapp shared the story of her family, being raised in a five child household with a single mother. Through those stories Sapp expressed that she overcame unconscious bias, the three types she listed were imposter syndrome, stereotype threat, and racial battle fatigue. Sapp encouraged the audience to look into those terms if they did not know what they were.

Imposter syndrome is when an individual doubts themselves because they are afraid of being exposed as a fraud. Stereotype threat is when an individual worries about conforming to a stereotype that is attributed to their social group. Finally, racial battle fatigue is when someone of African descent exhibits physical conditions due to having to work through fields and personal spaces normally dominated or favored by white citizens. All of these are examples of ways attitudes and stereotypes affected Sapp throughout her education, despite that she worked past it, and she encouraged the audience to do the same through different ways.

“If you are upset with someone do not take it out on others. Be nice to people, you never know who you are going to interact with. Be comfortable with confrontation, give people the benefit of the doubt, and learn how to forgive. Knowledge is power but only if you use it, we have to work ten times harder because of these unconscious biases. Language is important it will push people away from you or it will draw them to you. Do not allow others to define who you are. One monkey don’t stop the show, someone is going to not support you, do it without them. Reach out and assist others, keep your friends close and your enemies closer.”

Sapp had more methods to work past your unconscious bias as well, the rest of the conference also showcased that.

Safe Zone Awareness 101 talked about the importance of understanding different communities like the LGBTQ community. It covered why terminology is important and how talking to each other about our differences and who we are is important to creating a safer and more open environment.

Stereotypes in Media addressed how we create stereotypes, both positive and negative, and some based on truths, that are then shown through media outlets. It focused on how we the consumer need to be aware of stereotypes. The Shades of Gay talked about how to normalize what it is like to be gay, black and male in daily conversations.

Disability (stylized, DisAbility) Awareness focused on what it is like for students with disabilities to learn, and about learning practices and laws.

Is Unconscious Bias Affecting #MeToo? #TimesUp to Find Out focused on how society’s gender roles, stereotypes, and perceptions of men and women creates an unconscious bias that impacts current social problems for women in America and around the world.

In Your Comfort Zone was another session that drew in many different students both from Wilkes and the other schools.

Emily Lencoski, a senior majoring in Administration of Justice at University of Penn State Wilkes-Barre, said, “The session was wonderful we talked about the hidden biases that everyone has. We learned how to view the world from a different perspective, it was eye opening.”

Catie Lally, a freshman English major here at Wilkes said, “It focused on actively listening to others, and trying to learn from their perspective. It taught us that we do not have to pretend to not see color, we just have to be aware of our biases and work on going against them.”

One of the final sessions was Understanding and Addressing Macroaggressions presented by Dr. Sapp which went more in depth to her earlier points about unconscious biases like racial battle fatigue.

Overall, the event was touted as an experience that allowed for students to learn, grow, and become more open to minorities and other groups that they may not have fully understood, or may have had an unconscious bias towards. The event will be held again next year in October and will again be open to all students on campus.