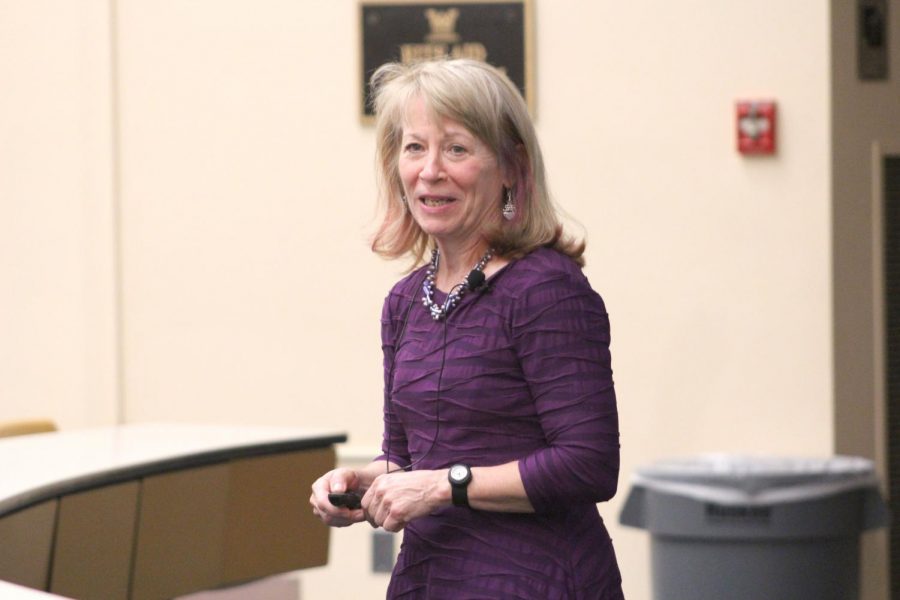 Richmond talked about the findings of her three ground-breaking experiments.

On Oct. 17, Dr. Geraldine Richmond was invited to campus as apart of the campus’ Catherine H. Bone lecture.

The Catherine H. Bone lecture in chemistry was instated in memoriam of Bone who began her 20-year teaching career at Wilkes College in 1946 and after retiring she continued to be a huge part of Wilkes.

Richmond talked about her history in the research of liquid surfaces through laser spectroscopy in relation to understanding environmental processes.

Among many accolades and prestigious positions apart of the American Academy of Arts and Sciences, Richmond is also the founding director of COACh, a grassroots organization that has empowered women scientists and engineers in the area of career advancement.

Richmond opened the lecture by talking about Benjamin Franklin’s research of oil/ water interfaces in 1751.

He, however, missed out on how this oil spreads, which Richmond focuses on.

She then talked about how oil and water play out in the real world, through oil spills.

She talked about the need to find a better dispersant to clean up the oil spills because the current means of clean-up are harmful overall; these include setting fire to oil and dumping a soap-like basic substance onto the oil, among other solutions.

“It is never going to be perfect … This is something we will live with for a long time,” said Richmond.

She then dove into her research that she has completed which focuses on “surface science:” what happens when these two substances meet at the interface.

Overall in the experiments she found that water is bonded to oil at the interface to allow for ions to be drawn; she found that the water surfactants are very similar but they are more acidic; and finally she found the lowest ever bare nano-emulsion through her experiment.

“The fact that it is for a woman who has had such a presence in this department … I am just honored,” said Richmond.

Richmond then opened up the audience to ask her any questions.

The first to ask a question was Charles Mahler from Lycoming College.

“Do you have any idea the orientation of the moleucles that make up the oil layers?” asked Mahler.

Richmond answered that the nano-emulsions are largely parallel to the interface.