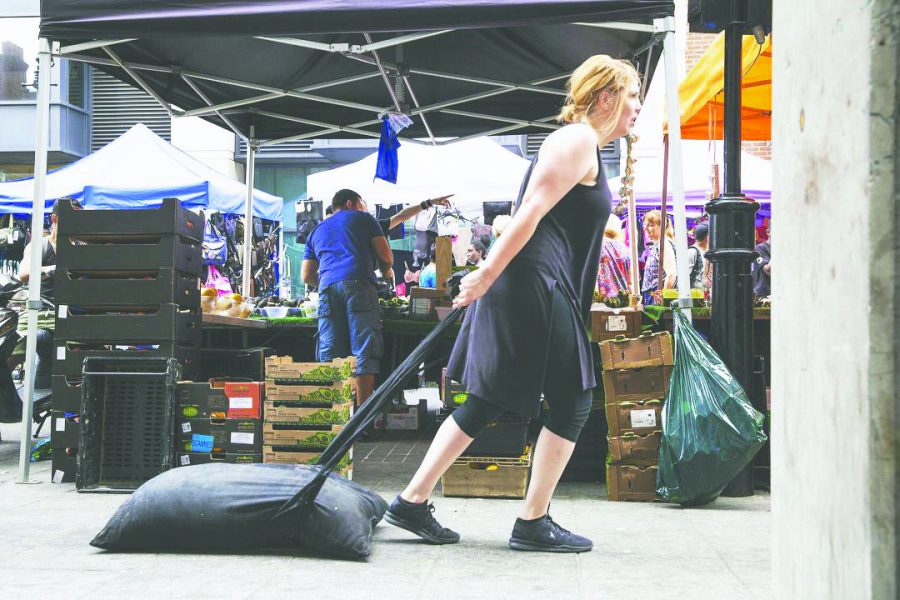 Heather Sincavage performing her performance piece, “The Burden of This.” Sincavage carries her body weight in manure to signify the way living with trauma feels.

Wilkes Director of the Sordoni Art Gallery Heather Sincavage was recognized by the Tanne Foundation for artistic achievement. One of seven artists across the country recognized Sincavage received a monetary award which she put towards her performance piece “The Burden of This” over the summer in London. The award also is going to developing of her new work.

Sincavage’s performance “The Burden of This” involves Sincavage carrying her body weight in manure as she goes through public areas.

“It is a piece about how we are always contending with our trauma, we walk around with it, we may not be talking about it or advertising it, but it is something that is very much apart of us.,” said Sincavage. “It is a part of who we are, how we act, how we interact with others and that trauma becomes formative in who we are and how we act. I want to bring attention to that we may try to keep that trauma private, but it is very much apart of our lives.”

Sincavage grew up in a family that valued the arts from visual to theatre to all kinds. Her father was a graphic designer and a painter as well.

“I had always wanted my work to look like his when I was younger and would get mad when it did not,” said Sincavage.

Art became a part of Sincavage’s life, she would go with her family to art museums in New York on the weekends and art became like another family member to her.

“It was never really a question. I always knew that that is what I was going to do. It was never going to be anything else. If I wasn’t an artist I would teach English. My parents realized that and made me very aware of programs and I ended up at Tyler’s School of Art in Philly,” said Sincavage.

Sincavage later went on to recieve her MFA at the University of Washington.

She later served as director of the Reed Fine Art Gallery and University Collections at University of Maine at Presque Isle.

“[The art gallery] is like the best playground ever. This is probably two and a half times larger than the art gallery I worked in Maine. We’re established, the space is just amazing to work with and I love the fact that we can be flexible and show many different kinds of art. The show we have going now is winding down and the next one will be completely different,” said Sincavage.

Sincavage hopes to be an extension for programs on campus and allow for them to see the curriculum of their courses in a non-traditional classroom, as well as provide exposure for students who have not been to an art gallery. She hopes students will be able to learn more about the communities around, topics they might not know, and get more involved with things they are apart of.

Jessica Morandi, a sophomore DDMA and Marketing major who works at the Sordoni Art Gallery spoke highly of her experiences with the gallery.

“Honestly, I love working at the gallery. It is enriching me with lots of knowledge and experience in many fields,” explained Morandi. “Heather is an amazing boss, I would not want to work for anyone else. She is kind, encouraging and inspiring, especially as a strong female role model. I have definitely picked up on putting a lot more thought into the meaning behind work. Heather was helping me come to a fuller understanding of not only my art, but also art around me.”

Sincavage hopes to see the art minor at Wilkes grow and hopes that her recognition and award will help bring notice to the work Wilkes help her create.

Sincavage did not start off as a performance artist, her degree is actually in metalsmithing. From there she believed there was more potential that she could do with the art she was making and wondered what she could do in other forms.

Nikki Hart, a junior environmental engineering major who works at the Sordoni Art Gallery spoke about the knowledge she gained from working with Sincavage.

“Working with Heather has been amazing. I come from a side of campus that has very few women so Heather is a female role model to me. I love working at the gallery it makes me feel like I am a part of something big and exciting,” said Hart. “I learned from Heather that art does not have to be necessarily beautiful. Art can be made from everything as long as it has meaning. I also learned that not everyone is going to love and appreciate your art and that is okay.”

Sincavage hopes that the gallery will inspire people to create more art.

“I love being in this role as an advocate for other creatives it is amazing. Art is a hard field, you are told no more than yes. You can take many routes to get to where you want to be as long as you believe in what you are doing and your form of expression. It is staying true to your vision, my biggest thing is to not give up. Keep on the path because what you know in your heart of hearts is what the right path is.”

Students and community members interested in the art field or the Sordoni Art Gallery should feel comfortable asking or contacting Sincavage for more information or advice about the field and events going on.

The Tanne Foundation was created in 1998.

“..the Tanne Foundation has interests in filling cultural voids, enriching the artistic experience and broadening horizons for artists and their audiences,” says the organization’s website.