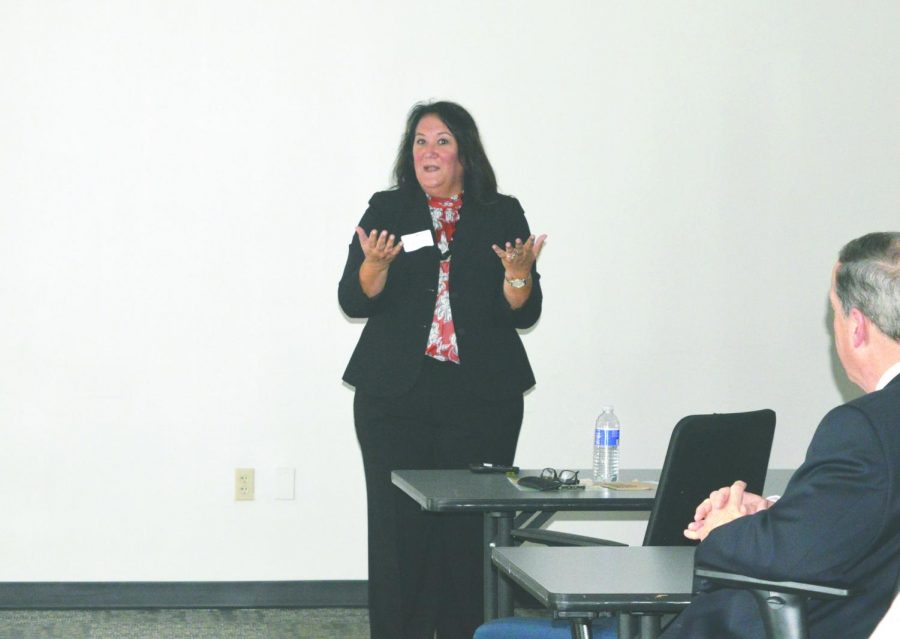 Kimberly Wylam, of the Family Business Alliance, discussed the building of a successful sexual harassment policy in the workplace.

Sexual harassment in the law is then broken down into two separate types: quid pro quo and hostile environment.

“Quid pro quo is basically a supervisor saying to an employee ‘engage in this sexual act or you are fired,’ he explained. “Employers out there need to recognize that your supervisor’s actions define you as a company. Even if you policies and trainings, if in fact your supervisor engages in this kind of conduct, you as an employer can be held responsible.”

The second type of harassment, hostile environment, refers to when employee conduct interferes with an individual’s work performance or create a hostile or offensive working environment.

“This kind of conduct has to be severe or pervasive,” Valentine explained. “Is one dirty joke in the workplace sexual harassment? No, it could be, but probably not. If everyday I am confronted at the workplace by a coworker [telling me a dirty joke], it comes to the point that maybe I don’t want to come to the workplace. This is when it becomes severe.”

Valentine continued by explaining that all individuals involved in a business can commit sexual harassment, including vendors. Valentine gave an example of a client sexual harassing his secretary.

“In the position I have, I have written letters on behalf of clients to vendors and customers to tell them to cut the nonsense.”

Sexual harassment could include all individuals regardless of gender or sexual orientation. Harassment could also take place outside of company hours at work-related activities, he explained.

As well as the morality and legality of sexual harassment, the issue also can cause workplace satisfaction to go down, resulting in a less productive environment, he explained.

“Who wants to come to work if they are being sexual harassed? Who is going to work their hardest in that environment? Absenteeism goes up, morale goes down,” Valentine said. Other reasons include negative publicity and liability for the employer under federal or state law.

Valentine also spoke about the action of retaliation, or adverse action taken against an employee because of their complaint. Even if a charge is seen as not viable, employers can be charged with workplace retaliation laws.

The training of employees and supervisors was also discussed.

“The EEOC has guidelines now that make it mandatory for employers to have training programs,” he explained. “If they do an investigation of your company, if there is a complaint, one of the first things they ask for is [proof of training].”

Kimberly Wylam, the president and managing partner of Baker Tilly Vantagen, spoke about the shift in sexual harassment awareness after the #MeToo movement came about last year.

Wylam showed brand logos which have had sexual harassment issues in the past.

“If you leave with anything today, know that it can happen anywhere, anytime. This is not just a construction worker’s issue any longer, this can happen in corporate level with the highest level employees.”

Wylam discussed reasons for why sexual harassment still occurs despite training and laws protecting employees from it.

“One issue is that high performers get away with it,” she explained. “They make a lot of money for themselves and for the company. The top salesperson may be making jokes that offend everybody but no one is saying anything because we are all making a living off of what he is doing on the other side. We turn a blind eye to that behavior.”

Another issue is the idea that bullies make better leaders.

“There is usually a trend that someone more aggressive, more in charge, usually got to be a leader. They might not have been the best leader, but that behavior led to promotion rather than counseling,” she explained.

Other issues include not paying attention to statistics, as well as not addressing problems as soon as they arise.

“Many of these cases could have not ever become an issue if somebody said something at the first offense, but they don’t because it’s awkward. We need to get rid of that awkwardness.”

“Many of these claims happen on social media, or social media is being used to talk about what is going on in the office, thus becoming evidence.”

Wylam finished off the presentation discussing the impact of millenials in the workplace on sexual harassment claims.

“[Millenials] come from a shock value of ‘I can’t believe this is even something we are talking about,’ because it would never happen to them,” she said. “They are the tattle-taler generation. If they don’t like something, they are telling someone about it. Not only will they tell someone, they are expecting results.”

The Family Business Alliance (FBA) is a local organization dedicated to providing services to locally-owned businesses and the community. The FBA is sponsored in collaboration by Wilkes University and Penn State Scranton.