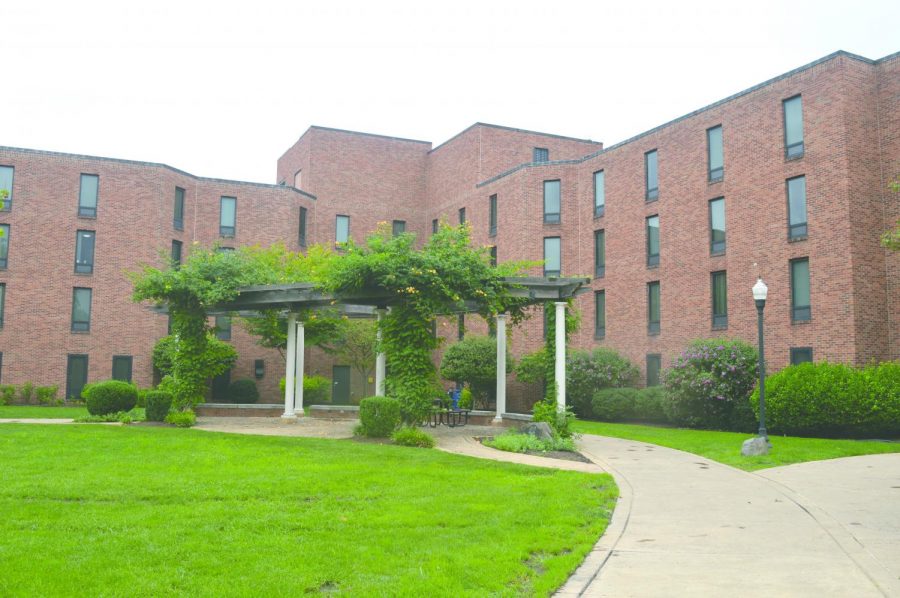 Evans Hall, a First-Year dorm which was altered to fit more students.

This semester, Wilkes University welcomed the largest first-year class in the university’s history. Along with the pride of being a growing university, the growth came with challenges as the university was forced to answer the logistics of where (and how) to accommodate the students.

This year’s class of 2022 features 661 full-time students, in comparison to last year’s first-year class size of 580 students according to the university’s online factbook.

Debbie Scheibler, director of Residence Life, spoke about the process of getting dormitories ready for the large class size.

“We were tracking the number of housing contracts we have in relation to the number of students we have attending,” she explained. “When we were seeing we were close to our max-bed, we had several conversations.”

Universities faced with maximum capacity problems have the option to start a waiting list, or to alter campus to fit the student’s needs.

“We expanded housing. What that means is we identify rooms that are large enough to accommodate additional furniture,” Scheibler explained. “It’s a little tighter, not perfectly ideal, but it’s a bed and a space on campus.”

Multiple dorms were expanded by 35 spaces, including Evans Hall, Roth Hall and Pearsall Hall. Students in expanded dorm rooms were given discounts on their housing rates.

The school has plans to de-expand rooms as students change their mind about Wilkes. Rooms that were altered into a triple would be re-altered back into a double as space opens up.

Rumors floated around campus that Cumberland Hall was being used as additional space for first-year students, however, Scheibler denied these rumors.

The hall, which is an off-campus apartment building being rented by Wilkes for on-campus students, housed the Panamanian exchange students last year. This year, the Panamanian students now live in Slocum Hall after the school offered students originally signed up to the hall to move to Cumberland.

Residence Life was restructured over the summer before the knowledge of the large first-year class.

“Even though we have a larger class, we have ample staffing,” said Scheibler. “National RA-to-Resident Student ratio averages are 1 to 48. Wilkes, because of our unique housing offerings, provides ratios of 1 to 12 up to 1 to 50 depending on the individual residential hall.”

Scheibler was confident in the school’s ability to maintain a comfortable environment for the students.

“While the larger class obviously poses new challenges to the institution, the university is poised to accommodate the students the best we absolutely can,” she continued. “It’s nice that we expanded space instead of putting a student in limbo.”

University President Patrick Leahy was proud of the large class size, but did not want students to worry.

“The class size is only the largest by a student or two,” he explained. “The good news is that, while I know it is crowding the campus a bit, the amount of students we have at the undergraduate level has not really changed in the last few years.”

The school is also in the process of adding parking to campus to oblige the growing population.

“Some of this is still in the works due to the area behind the Student Center not being entirely complete,” Leahy said. “Ultimately, there will be more spaces.”

“We are trying to ensure our infrastructure keeps space with what I take to be a good sign, that there is more student interest in Wilkes than ever before.”

“I hope [the increased class size] is a sign of the increased notoriety of Wilkes University, it might be the new athletic programs,” said Leahy. “It is a mix of a couple things. We have not reduced our standards to get in or anything like that, but things like our new men’s and women’s hockey program are bringing in people from across the country.

“I think people are seeing that what they can get at Wilkes is at a higher value than what they could get at a public university.”

Although Leahy admits that students living in triples in Evans would say there are ‘growing pains,’ he doesn’t think there are significant issues with the larger first-year class size.

“We have added faculty significantly over the last few years,” he said. “I don’t think [the class size] is taxing us academically or leading to larger class sizes.”

Kimberly Bellard, a first-year computer science major, lives in one of the renovated room in Evans Hall.

“It’s really hard because [my roommate] is from farther away, so she brought more stuff than I did,” explained Bellard. “I live only 30 minutes away, so I can bring stuff back and forth as I need to but it’s still pretty rough.”

Bellard keeps her hope that more space will open up in the building.

“From what I hear from older friends of mine, usually kids will drop out and more space will open up,” she said. “I’m really hoping for that.”