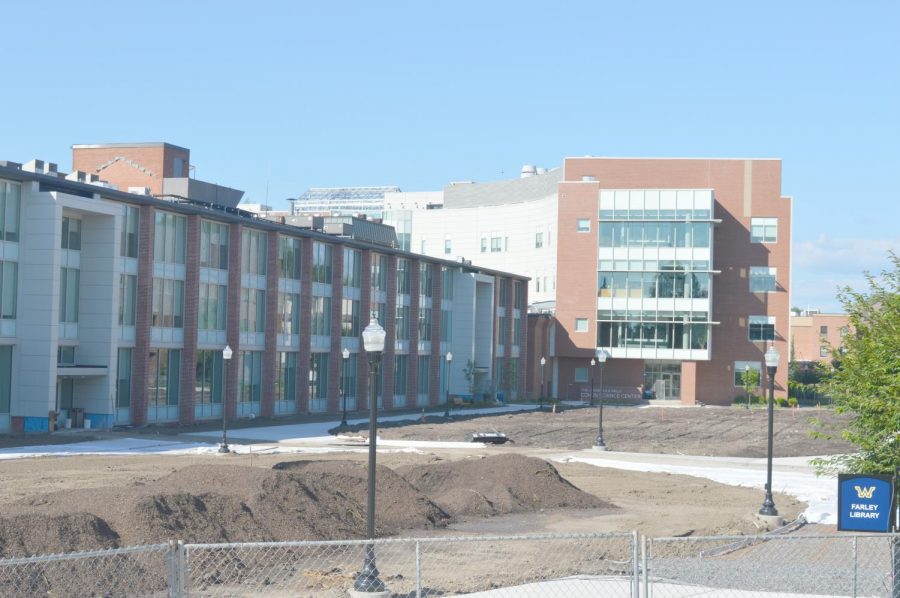 The site of the Fenner Quad during July showed dirt, rather than greenway.

With the help of eight different contractors, The Department of Facilities and the support of the city of Wilkes-Barre, Wilkes University’s campus is getting a face-lift this summer as a part of the $100 million campus enhancement plan. This plan, announced by Wilkes President Dr. Patrick Leahy in 2013, started on May 21, as soon as this year’s graduates received their diplomas.

To kick-start summer construction, Leahy, state Rep. Eddie Day Pashinski (D-Wilkes-Barre), state Sen. John Yudichak (D-Nanticoke) and guests got together on the afternoon of May 21 to further discuss the construction project at the ceremonial “first dig.”

According to Charles Cary, executive director of facilities, construction is “progressing on-schedule” and will wrap up the main renovations mid to late August. Some minor renovations will be completed during the school year, as those will not hinder any part of student life.

Construction will not only touch on the main Fenner Quad on campus, but will also help spruce up other components of the campus.

The Henry Student Center enhancements will include outdoor seating for students as well as an expanded parking lot and new entrances from the Student Center to South River and South Franklin Street.

“These two Gateways will beautify the campus and support recent renovations to the engineering labs in Stark Learning Center,” Cary said.

The E.S Farley Library will receive an electrical replacement to provide cost efficiency and reliability.

The ongoing construction of Stark Learning Center is still underway as well as the addition of a new elevator and the reconstruction of the interior courtyard, which has been sectioned off as apart of construction.

Residential housing, University Towers and most of the mansions, will be spruced up with landscaping and updated, cost-efficient electrical work.

“These enhancements create a cohesive campus experience that will make Wilkes safer and more attractive, increasing Wilkes’ unique appeal as an American private university that offers the opportunities of a large research institution in the mentoring environment of a small private college,” Cary added about how the enhancements are projected to affect student life on campus.

Assistant Director of the International Engagement Office at Wilkes University, Hussain Alrumaym, shared his opinion of the $100 million enhancement plan on campus.

“Wilkes has taken a major step with the new campus enhancements projects to renovate spaces for the students studying and living experience,” Alrumaym said. “I’m very excited to see how the new enhancements and landscaping will beautify our campus.”

Although construction is planned for the summer when a majority of the campus is enjoying their break, those taking summer classes and working on campus have experienced the setbacks of the construction.

The center of campus is completely blocked off to revamp the Fenner Quad with a new sidewalk layout, forcing those who wish to enter the academic buildings to use the main streets that surround the campus.

“Construction definitely presents a challenge in getting around campus,” said Heinz. “Many of the routes I typically take to classes have been closed, which forced me to find different routes to class.”

Despite the current obstacle the construction forces Heinz to face he is hopeful for the outcome of the enhancement project.

“The construction is good though because it will make things even more accessible in the future,” Heinz said.

“I think [the finished Quad renovations] will encourage students to hang out outside more often whether it’s to study or just to relax,” Graham said.

Leahy assured students that raised university tuition for the upcoming semester is not a result of the enhancement project, as the funds are being drawn from the Pennsylvania Department of Community and Economic Development and university money.

“[The various construction projects] are designed to transform Wilkes University into a park-like, residential campus in the heart of the City of Wilkes-Barre, added Cary.