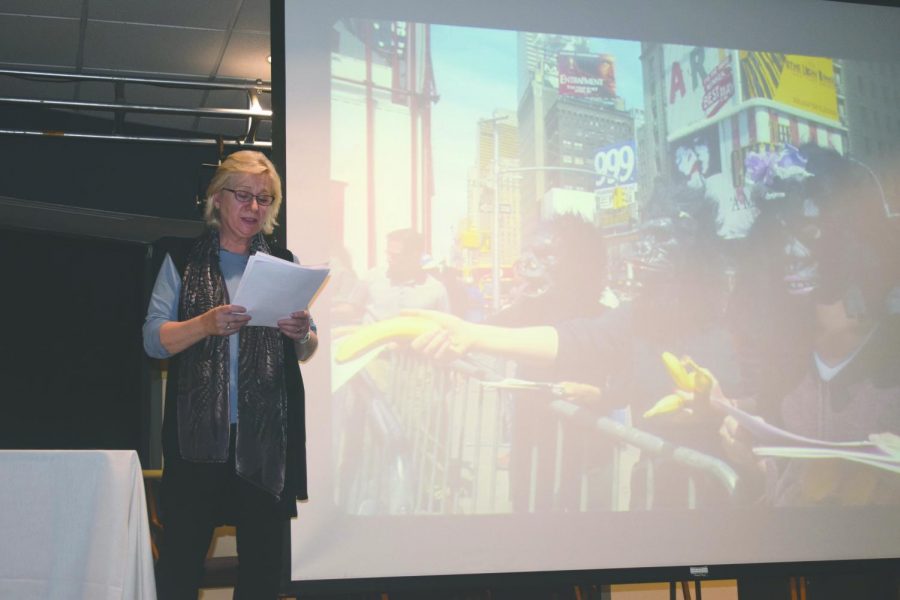 On April 9 and 10, Wilkes University and King’s College collaborated for a seventh year to host the annual Women and Gender Studies Conference, titled “The Art of Activism” at Wilkes University.

The conference hosted Donna Kaz, also known as, Aphra Behn, as its keynote speaker. Kaz’s keynote address, titled “PUSH/ PUSHBACK: 9 Ways to Make a Difference with Art and Activism,” focused on her experiences as a former Guerrilla Girl, the process of becoming an activist, as well as shedding light on being a survivor of sexual and domestic abuse.

Kaz, at first, focused on the lack of representation of women in the theater arts with a reading from her memoir published in 2016, “UN/MASKED: Memoirs of a Guerrilla Girl on Tour.” She talked about her efforts in 1997 of attempting to bring a women’s committee to the Dramatists Guild of America, which was denied. This denial, to Kaz, essentially symbolized the theater and art world’s discriminatory view of women and set the tone for the remainder of her talk.

Kaz went on to discuss the history of the Guerrilla Girls and their efforts, successes, and failures when promoting and fighting to end gender discrimination in theater.

The Guerrilla girls are given the names of female artists who have passed away.

Donna Kaz’s Guerrilla Girl alias, Aphra Behn, was a female British playwright, poet and spy who was the first woman to make a living from writing.

“I thought she was sort of the perfect Guerrilla Girl,” said Kaz.

The Guerrilla Girls wear rubber gorilla masks to draw attention away from themselves, thus shifting the focus on the sexism and discrimination that is happening within the arts. However, Kaz presented under her own name and was unmasked.

“I decided to unmask to share with you my story and how the Guerrilla Girls effected change in the art world and in the performing art world and beyond with some of our tactics,” said Kaz.

Before joining the Guerrilla Girls, Kaz had always had a background in theater, obtaining her bachelor’s degree in theater from SUNY Brockport, which inspired her focus on what she found to be the theater’s long-standing discrimination against women. Kaz also pointed out that no one was talking about sexism in theater.

When she joined the Guerrilla Girls, Kaz’s theater background influenced the group to switch gears and focus on the discrimination in theater; from there the Guerrilla Girls took off to sticking stickers on the stalls in theaters, congregating at the TKTS booth in New York to conjure attention and support, and even protesting the Tony Awards, all with gorilla rubber masks, bananas, and facts about discrimination.

Kaz changed gears and talked about the effect of being sexually assaulted by her professor as an undergraduate, being domestically abused by her actor boyfriend, and how it influenced her to become an activist.

“I am really happy to say that our start in focusing on sexism in the theater world had this impact,” she said. “I really feel lucky that I have been a Guerrilla Girl and remain a Guerrilla Girl.”

Kaz urged the audience to support all women artists and artists of color to show directors that we support the change.

Towards the end of her talk, Kaz gave all current and future activists nine steps to make change with activism and art. The steps included: working together in small groups; gathering evidence, like statistics, and utilizing them; thinking like an expert; don’t forget to use humor; “queer it up,” go beyond gender norms and be diverse; ambush the opposition; learn how to play defense; practice self-care and embrace fellow activists; and be positive. Kaz urged we will win following these steps.

“I charge you now to all become Guerrilla Girls. I want you to go out there and mess things up,” said Kaz.

“I am hoping more people will realize what feminism is and what it is not,” said Kulp. “A lot of people confuse feminism with ‘girls are better,’ so I am hoping that they take away that it is equal.”

“We had a wonderful turnout tonight,” added Briceño. “She was such an engaging speaker and I think it was enjoyable no matter what your perspective is.”

“I loved that she sort of used her story to tell the audience about how to do activism,” said Dr. Mia Briceño.

“It’s very important to me,” said Briceño, “It’s something I always touch on in my teaching in general.”

The title of the conference, “The Art of Activism” was inspired by the recent efforts to use art to draw attention to the ongoing social issues faced in today’s society; including the Women’s March and March for Our Lives.

During the two days, the conference held panels, presentations, and films that focused on topics relating to gender, social justices, and more. Presenters included students and faculty of Wilkes University and King’s College, but also students from Marywood University and the University of Pennsylvania.

“There was really something for everyone,” said Dr. Jennifer Thomas.

Dr. Jennifer Thomas, associate professor in the psychology department and director of women and gender studies at Wilkes University, was pleased with the outcome of the two-day conference.

The conference also included a poster making workshop with Donna Kaz sponsored by the Sordoni Art Gallery. The poster making session incorporated the two main subjects for the conference: art and activism. Students and faculty from King’s and Wilkes participated in the workshop and worked together to make their own activist posters shedding light on issues they feel strongly about or even faced themselves.

“The poster session was so inspiring,” said Thomas. “It was very hopeful meeting other people that felt similarly to you. [Kaz] gave us really great ideas of how we can take a message and use guerrilla tactics on campus to affect change.”

Sincavage performed an art piece to honor women who have died as a result of domestic violence in Pennsylvania. This one performance is just a piece of a larger project where she visits every county in the state to honor each life lost to domestic violence. Sincavage marks each breath made against the glass an hour per victim. At the conference she honored the two lives lost in Luzerne County in 2016.

She also performed an art piece where she dragged her own body weight of manure across the Wilkes campus to represent the burden of trauma on a person.

“I think our theme was really fun and spoke to college students because all of us can be activists in our own way,” said Thomas. “There are so many ways to be an artist and to have your message heard.”

The women and gender studies minor is open to all Wilkes University students and focuses on gender, sexuality, and rights. The minor requires 5 WGS courses, which include classes in anthropology, english, communications, and more. Students pursuing the minor are also required to take WGS 301: Introduction to Women and Gender Studies. A complete list of Fall 2018 WGS classes are listed on the women and gender studies website. For any further questions regarding the minor, please contact the program director Dr. Jennifer Thomas at [email protected]