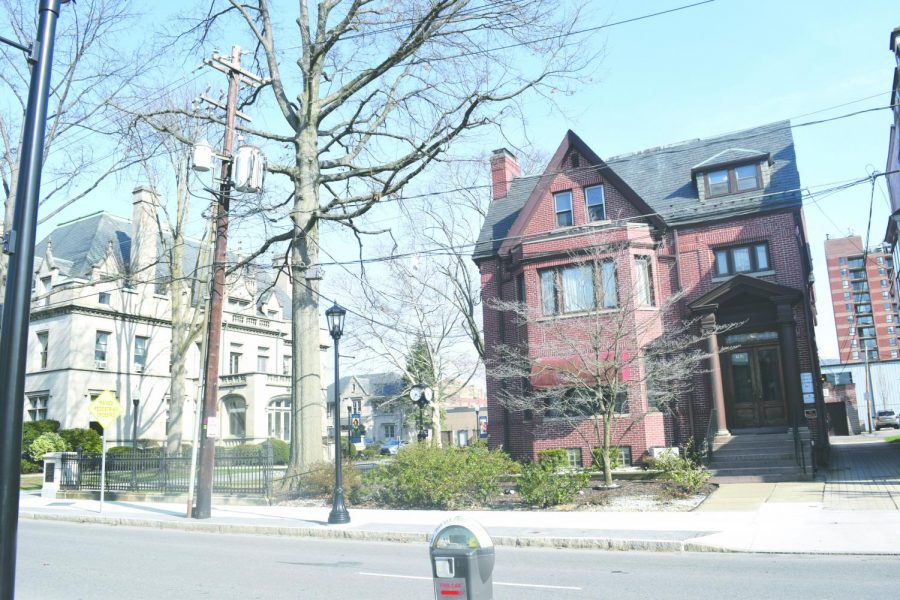 This brown building, which is located at 182 S. Franklin St., adjacent to Weckesser Hall, was recently purchased by Wilkes. The university is still unsure what will be done with the property.

Over the next few years the Wilkes University campus will be experiencing several developments.

Over the course of eight years, the $100 million project will see several buildings and areas across campus being enhanced and developed.

The project began with the construction of the Cohen Science Center in 2012 and will be completed with the enhancement to the Ralston Athletics Complex.

“We want to make sure every piece of campus is being touched,” President Leahy said to Student Government.

Currently, the enhancement project has created the Cohen Science Center, the Sidhu School of Business in UCOM, an increase in  campus dining options, the Karambelas East Campus Gateway and the Karambelas Media and Communication Centre.

The Engineering Innovation Center, which will be located in the east side of the Stark Learning Center, will be the first project to be completed, and is set to be opened in the first week of the fall semester.

“We have to keep renovating it,” Leahy said regarding the fact that when Stark was build in 1957 it was one of the most state of the art buildings on campus.

The courtyard in Stark will also be renovated over the summer. There will be a lawn area, a concrete patio and mounted plants.

“We live in an urban area. We can’t afford to waste space,” Leahy said in regard to the courtyard being one of the least-used areas on campus.

Another enhancement is in the form of the campus gateway project. There will be a gateway created on the south side of campus, opposite and behind the Henry Student Center.

The grass and pavements in the greenway will be redesigned with a sidewalk leading from south street, past Kirby and connecting into the side of Stark.

The east gateway sidewalk will also be extended so that it connects to the Engineering Innovation Center.

This means that over the summer, the George Fenner Quadrangle, also known as the greenway, will be closed. Buildings will still be accessible from their external entrances during the closure.

Other renovations to Stark include the creation of the “Pharmacy Collaboration Corridor.” The archways on the ground floor and seperate doors will become one long corridor with extra classroom space. The space will be predominantly pharmacy, however other subjects will have access to the classrooms.

The neighborhood enhancement project will also continue as the sidewalks are improved all around campus.

Enhancement to the Ralston Athletics Complex will be the final element of the project. There will be installation of safe pedestrian walkways, replacing the shared road and sidewalk. Astroturf will be installed and new gateways will be placed near the complex.

During his talk, Leahy emphasised how all of these projects are either state or alumni funded.

However, some students aren’t impressed with the cost of the enhancements.

“It’s kind of absurd, it’s money that could be going to something else—there are so many different things,” Dan Nguyen, a sophomore science major siad.

Justin Burda, a freshman mechanical and electrical engineering major, brought up the fact that he’s struggling to find an adviser that will help him develop more energy saving projects for the campus.

“Yes they’re doing redevelopment but what are they doing to feed back to the university? If they want to focus on engineering they need to find away to turn [the efficiency] around,” Burda said.

The university has recently purchased property at 182 S. Franklin St., which is located opposite Weckesser Hall.

“Given the building’s proximity to campus … it was prudent of the University to purchase the property when the opportunity arose,” said Director of Communications, Gabrielle M. D’Amico in a statement regarding the recent purchase.

“There is no perfect clarification on its use yet, but it’s safe to say Wilkes will make a significant investment in the property and preserve its place on campus and in downtown Wilkes-Barre,” D’Amico added.