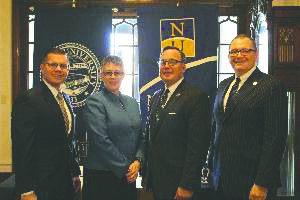 The agreement was signed on March 23, and states that pre-pharmacy students attending Neumann University can apply to the Wilkes University Nesbitt School of Pharmacy and be guaranteed an admission interview through a streamlined process.

Neumann students are not guaranteed a place in the pharmacy program, however.

Dean of the Nesbitt School of Pharmacy, Dr. Scott Stolte, praised the new partnership and discussed what it means for the school.

“I think it’s a sign of how well the pharmacy school here is respected across the state, certainly within our region,” Stolte said. “Now I would consider Neumann to be outside of our usual region. They’re a Philly region school and to have a relationship develop with them when there are alternatives in Philly is a nice testament to the quality of our program.”

Kayla Reece, a junior pharmacy major, was impressed by the connection made with Neumann University.

“It’s nice that we have this partnership, especially with a school down near Philly, because there are so many schools near Philly that could have targeted up on that and they didn’t,” she said.

Reece further praised the university on expanding their connections.

“I know when I was looking into other pharmacy schools, I noticed that there weren’t many opportunities to transfer from one place to another like you see with med-schools and other majors,” Reece said.

“I think this is a great idea and it’s a good reflection on how we want to grow as a school,” Matthew Dacey, a junior pharmacy major added.

Neumann University does not have a pharmacy school, so their pre-pharmacy students have to apply elsewhere if they want to continue to pursue a pharmaceutical career.

The Wilkes University and Neumann University pre-pharmacy programs are similar and the school has confidence that any Neumann student can complete their pharmacy qualification at Wilkes.

“We’re pretty confident in the training they’re getting there having reviewed the curriculum courses that they are going to be taking. We feel that they will be very well prepared to come to Wilkes and succeed here.” Stolte said.

The Nesbitt School of Pharmacy tries to leave spots free for any transfer students that may wish to attend Wilkes.

“There are a lot of colleges that don’t have schools of pharmacy and there are some really good students out there. We want to have spots for those people who do change their mind and really want to be in pharmacy,” Stolte continued. “We always have a goal each year of at least getting a few transfer students into the program. I think that’s most about getting a diversification of ideas, training and background.”

“Every year we don’t know how many [students that will] be, but based on patterns we can sort of project that out. We have spots to accommodate transfers and people interested from other universities every year,” Stolte said.

This was the first academic year that the Pharmacy School failed to attract the targeted number of transfer students into the pharmacy class.

In terms of other partnerships and formalized connections, Stolte said, “I think there will be other people that will reach out to us … mostly private colleges who don’t have a school of pharmacy and we’re the closest one to them so i think there will be opportunities.

“We’ll be very careful with who we select to ensure we have similar values and similar missions. And also making sure the students who come in will be well prepared to succeed here.”